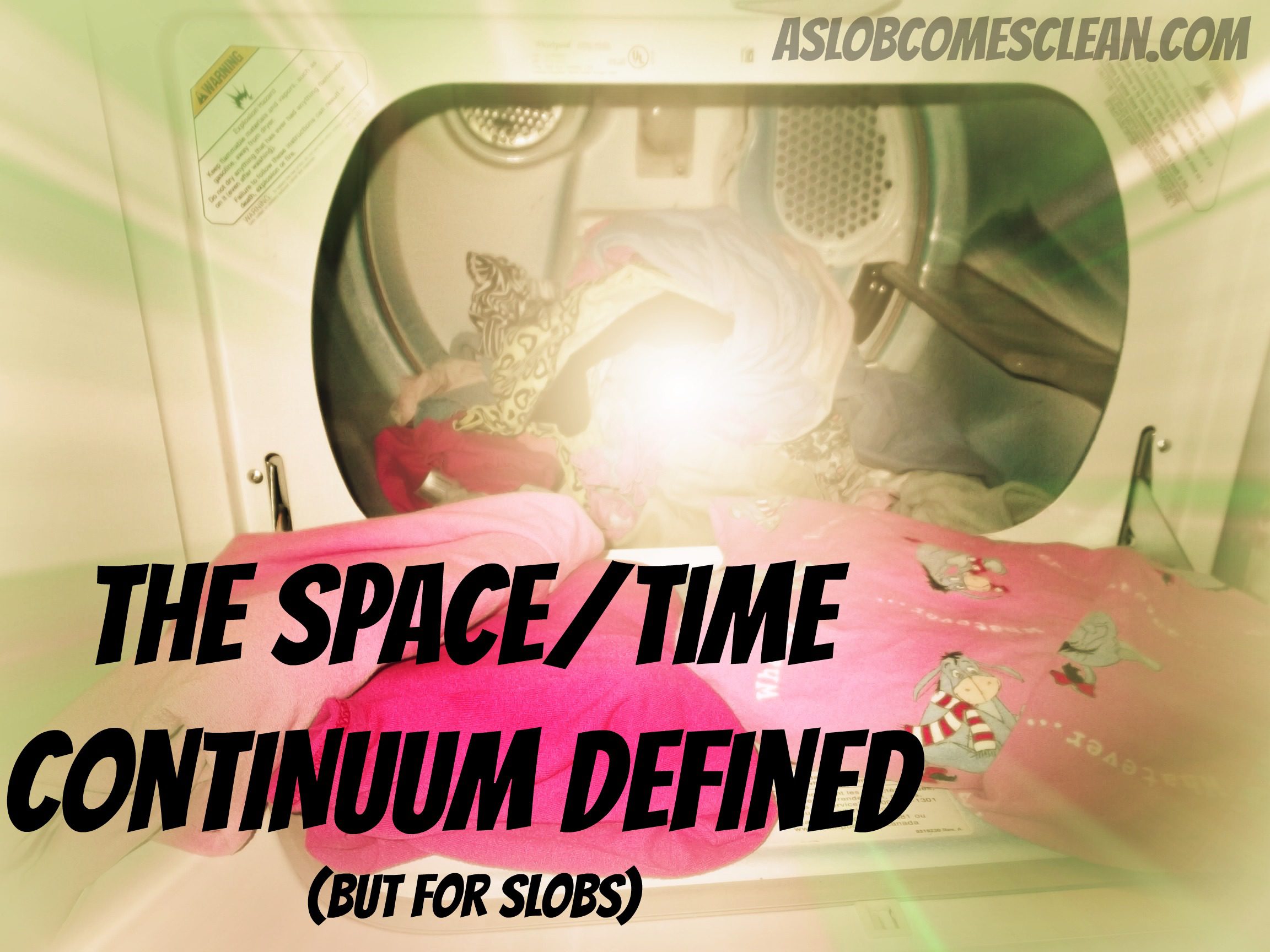 I have no idea what the Space Time Continuum is. I don’t even know if it’s a real science thing or if it’s something I heard on one of the less-than-eleven episodes of Star Trek I ever watched.  It just sounds good for what I want to write about in this post.

I’m a logical person. I despised the endless memorizing of pointless-to-me-but-I’m-really-glad-my-doctor-didn’t-think-they-were-pointless facts in Biology class, but I loved Chemistry and Geometry. Memorize a few facts and then use logic to work out the problem.

Sometimes, though, I’m too logical. In certain situations, my excessive logic becomes illogical. I think it’s like when scientists come up with something that works in the controlled situation of a lab, but then doesn’t work out in the real world.

Not that I’m a scientist.

Those white lab coats would totally wash me out.

Anyway, time doesn’t work the same way for Slobs as it does for Normal People.

Here are two examples to support this hypothesis:

1.  The second part of my first decluttering question (the part that isn’t actually a question), is to take an item straight to its home once you know where its home is.

This means that in the course of a decluttering project, I may take sixteen (or sixty) walks through the house delivering individual items to their homes.

Compare this to my pre-blog logic. I used to make Keep Piles. Or have a Keep Box.  Obviously, if I make piles for each room, I’ll only take one or two (or four) trips through the house delivering items to their homes, therefore saving twelve (or fifty-six) trips.

But, the space-time-continuum formula is different for people like me. For me, it’s 100% guaranteed that I’ll be distracted at some point before all those piles are efficiently put away. They’ll morph into one big pile, and I’ll end up re-doing the entire project and the overall time spent will be longer than when I do it my take-it-there-now-no-matter-how-many-trips-I-have-to-make method.

2.  Another example of my Slob Math?  Laundry.

I’ve discovered the laundry management technique that rocks my world.  Actually, it wasn’t a discovery. It was just a matter of me giving it a real try even though I’d resisted this method all my laundry-doing life.

It just didn’t make sense to me to stop and fold each load as I took it out of the dryer.

I have control over folding laundry. It’s simply a matter of me getting it done, and there’s really nothing stopping me from folding at any given point in time.

But I am at the mercy of the washer and dryer.

Stick the clothes in, turn the machines on, and there’s nothing else I can do but wait until they’re finished.

The oh-so-logical part of me KNOWS that if I can get wet clothes into the dryer as FAST as possible and the next load of dirties into the washer . . . the whole Laundry Day will take less time overall.

Logic would dictate that I should fold and put away after the next task has begun. Two things happening at one time? Isn’t that the goal of every efficient laundrist?

Except that once the washer and dryer are humming along with the next load . . . there’s no guarantee I’m going to get those clothes folded and put away immediately.

In fact, if I was a bettin’ slob, I’d probably bet there’s a 3-to-1 chance those clothes will become invisible in their temporary spot on the couch or in a laundry basket.

And there’s just something so finishey-feeling about pushing start on that next load. Nothing pops that good-feeling-balloon faster than folding laundry.

Except that “distraction” isn’t a possibility in my personal equation, it’s a definite.

OK.  I’m done with all the pretend-scientific talk.  Except to point out my picture for this post, and tell you how much fun I had making it look like there is something science-fictioney about my dryer.