Clothes are my nemesis.

I don’t think I’m a shopaholic.  I pretty-much never go to garage sales anymore. I wear the same few pieces of clothing almost every day. I’ve purged more in the past three years than any woman should ever have to purge in a lifetime.

But even though I finally have laundry under control . . . my master bedroom looks like this right now: 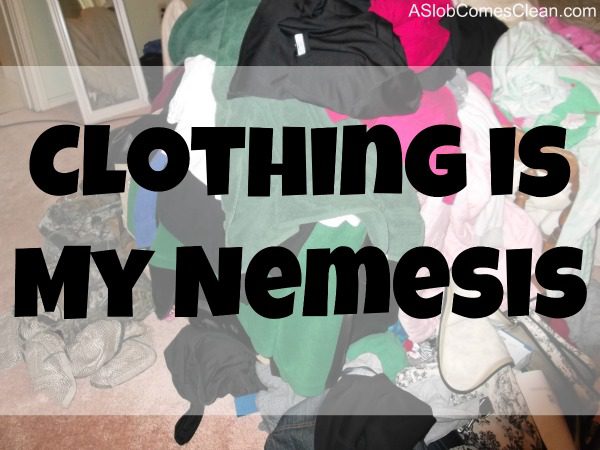 Go ahead.  Unsubscribe. Feel the shock that the woman who shared the Master Bedroom Saga for all the world to see has failed again.

And . . . there’s not even going to be an after picture in this post.  Maybe soon.

But right now, I’m in a bad mood and just want to say that sometimes I wish I wasn’t so prude.

Because I’m pretty sure I would rock being a new (putting a little extra wording here in addition to the wrong spelling to throw off the googlers) dist.

Go back. Just sound out the word before the parenthesis and the word after.  Put them together. (Seriously, dist is a word. No red-squiggly line or anything.)

That’s right.  Today is a day when I’d like to throw away ALL my clothes.

And move to a little garden called Eden.

You know the curse? I’ve never heard one sermon on how the actual punishment was that we would have to deal with CLOTHING.

OK.  I’m done.  It’s possible that Tax Day has stressed me out.