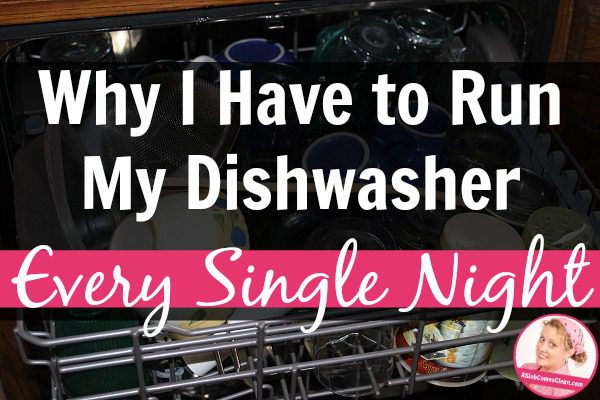 I’ve mentioned to a few people that I run the dishwasher every night, and empty it every morning.

They think it’s strange to not just wait until it “needs it.”

They don’t understand because they’re normal.

I have to make myself run it every night for two reasons.

First, by running it at night, I’m able to empty it first thing in the morning, leaving myself no excuse to let dirty dishes pile up in the sink all day long because there’s no room in the dishwasher. Or, if I run it randomly during the day, I may or may not have the time (or the occurrence of thought) to empty it, leaving me in basically the same situation.

Second, if it isn’t a non-negotiable for me, I tend to assume that there aren’t enough dishes to fill it, and so I don’t bother to put the dirty dishes from the counters, or the table, or the computer desk, or the coffee table in it. And generally, I’m wrong.

Knowing that I have to run it every single night (because I’m a slob, and I’m compensating for how my slob-brain works) means that I go gather up every dish in the house in an attempt to fill it full. Generally, I do fill it full. Since we don’t use paper plates anymore, and as a germaphobe I don’t like to drink out of a cup if I can’t remember for sure that it was mine, and I can rarely remember if it was mine . . . we have lots of dishes at the end of a day. There’s also enough room for the bigger stuff that I used to have to hand wash because the dishwasher was completely full with cups and plates.

Occasionally, there are days when it isn’t full, and generally that’s when we’ve been gone. If that is truly the case after every last dish has been gathered, and I can justify that the next day won’t bring an overabundance of dishes, I won’t run it. But I can only make this decision after I have made every attempt to get it full. And at that point, at least there are no dirty dishes lying around!