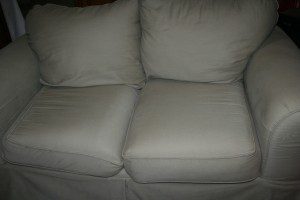 What do you see when you look at this picture?

That’s what I see too.

This couch (actually a loveseat) has been invisible, covered in clean laundry for the past ten years.  And we bought it ten years ago.

Which means I’ve only rarely seen it not covered in clean laundry.

I felt the need to clarify that it’s a loveseat because that makes me feel less space-wasteful.  I would never cover an entire real couch with clean laundry because then where would we sit???

But really, over the past several years as our family’s bo-hineys have increased in size while the surface areas of the furniture in our living room have not . . . this space-for-sitting was needed.

Which brings me to the Phantom Laundry Phenomenon I’ve experienced over the past month.  I finally grasped the benefits of folding laundry straight out of the dryer a while back.

But it has only been since school started four weeks ago that I’ve been adamantly doing it.  Like, every single time without ever coming up with a totally-logical-and-arguable excuse.

And I have to say, the results are kind of freaky.

The piles in the little hallway outside my laundry room?  There’s no trace of them.

No clues to follow and eventually find laundry piled on the loveseat.

I’ll admit that, strangely, it’s unsettling.  Like a part of me is missing.  I’m just so accustomed to seeing piles of laundry (either clean or dirty) that not seeing them is just . . . well . . . weird.  Like, where have all the clothes gone?

But don’t get me wrong.  I’m not complaining.

I think it’s kind of like that strange feeling you get after wearing ankle weights.  When they’re gone, your feet feel so light and you have to get used to walking again.  And you have this phantom-ey feeling where the weights were.

And just like with ankle weights (I assume, since I never wore ankle weights for anything but a whim), you’re stronger and better with the weights being gone.

Like how we now have enough comfortable spots to sit on family movie nights.  And  the master bedroom has a fighting chance because an impending doorbell doesn’t require a laundry pile transfer from the loveseat to my bed.

I’ve tried other ways.  I’ve piled clean laundry on my bed to fold (or move to the loveseat) before I could go to sleep at night.  I’ve folded immediately and waited til after school to distribute to bedrooms.  But the only way the laundry  disappears into thin air is if I truly and literally fold it straight out of the dryer and put it away IMMEDIATELY.  Like, before I even put the next load into the dryer. 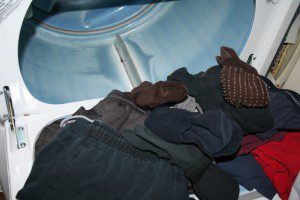 Not even for socks.  Not even when my back hurts from bending over the dryer door and matching up the blankety-blank socks.

Not even when the dryer’s buzzer sounds within two seconds of putting my lunch into the microwave and I’m very very hungry.

And yes.  I do fear that the minute I hit publish on this post . . . this newfound resolve will disappear when faced with whatever other great excuses I’ve had in the past for not doing it this way.

I guess I’m a risk taker. 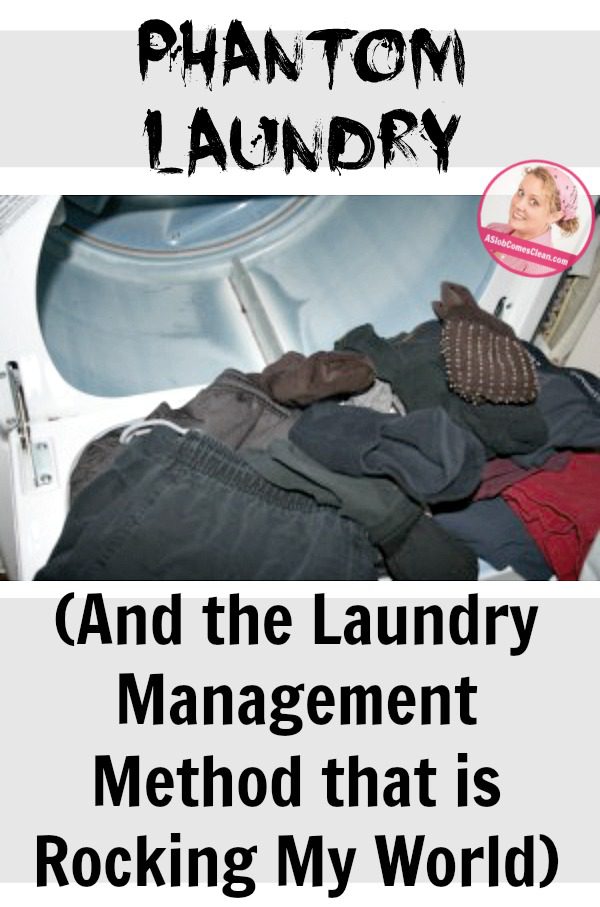