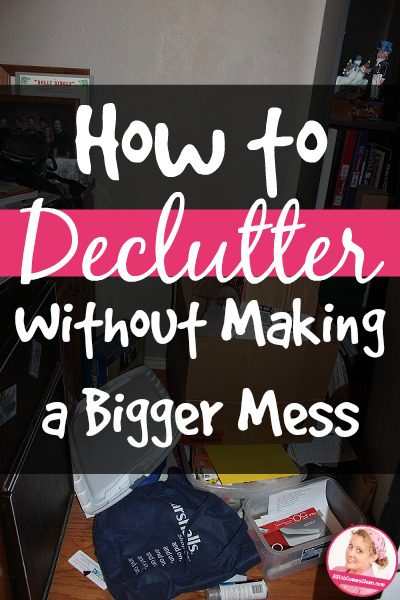 I get this question/complaint a lot.

I totally understand the frustration since it was MY main frustration with organizing and decluttering before I started this blog.

I used to be all about maniacal decluttering sessions which involved pulling every last thing out of a cluttered space.

Every last thing ended up all over my floor, spreading into a bigger mess than I had before I started.

Since that method rarely/never ended well, I had to come up with a new way.

First, my only decluttering supplies are a donate-able Donate Box (so I don’t have to go back through the things I’ve decided to donate) and a trash can/bag.

My garage has full-to-the-brim Keep Boxes from years past.

Even worse than a Keep Box is a Keep Pile. Keep Piles caused the most heartache and frustration. WHEN (not if) I got distracted, they morphed into a huge mess that was now in plain sight! Outside of the drawer/closet/cabinet that used to hide the clutter!!

Second, I use my two simple decluttering questions.

The key to not creating a bigger mess comes in the second part of the first question. (The part that isn’t really a question.) It’s also how I avoid the Keep Box/Pile.

The part about “taking it there right now.”

It goes against all Dreams of Efficiency to feel like I’m stopping in the middle of a decluttering project to take one little item across the house, but it’s essential for my distractible personality.

Taking something I’ve decided to keep to its proper home RIGHT NOW means there is no middle of a project.

If I have to stop before I’m finished, I’m automatically at a stopping point because I just need to empty the trash can and put the Donate Box in the Donate Spot.

I may not be totally done with the project, but I’m better off than I was before I started.

Here’s how it worked for me last week.

This corner in my gameroom has been taunting me for over a year now. 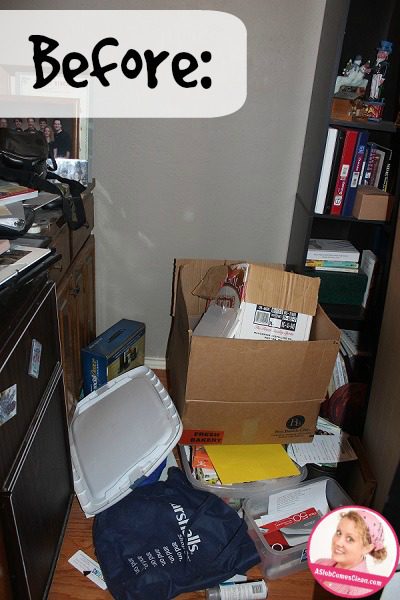 I pretended it wasn’t noticeable by putting a screen in front of it.

I’m motivated by dreams of having a place to set up my sewing machine (fine . . . one of my two sewing machines) so it can be available for spontaneous sewing projects.

Not that I really know how to sew, but whatever.

My main  goal was to purge. To stick as much as I possibly could in the Donate Box. I knew this stuff had been there for a LONG time. I didn’t know what was buried within the piles. It only made sense that most of it should go. 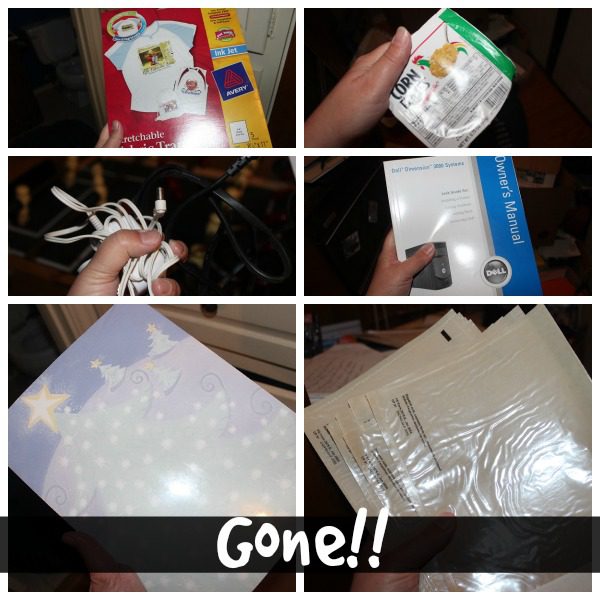 I was brutal, but it wasn’t easy. Well, the two-year-old cornflakes and eBay packing slip holders were easy, but the rest wasn’t.

I’ve had it for at least eight years.

If that dream ever becomes a reality, I’ll spend less than five dollars to buy some new paper.

Cords stress me out. WHAT IF I eventually need the item that needs that cord??

But those cords have been there for a very long time. And if I needed them, I would never have looked there.

If I ever needed information from the user’s guide for our rarely-used desktop computer, I’d search online.

My point in listing out those things is that I didn’t put off any decisions. I didn’t sort, then look, then ponder. I pulled out one item at a time and made a decision about it.

But not everything needed to go.

My “office supplies box” was back there. I often go digging in it when I need an envelope or scissors or such.

Having a place for office supplies is legit, but that place was not legit.

So I found a drawer in a nearby dresser that could easily become an Office Supply Drawer. 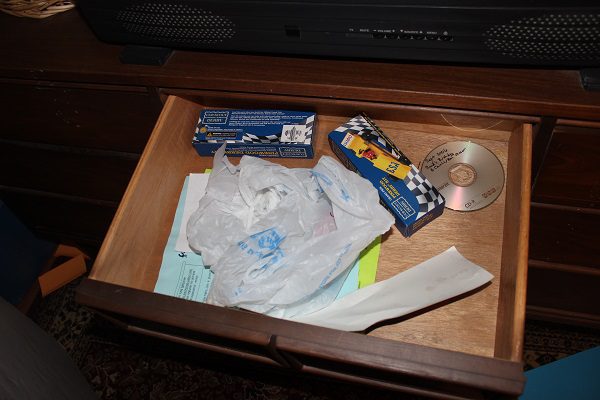 The ONLY thing worth keeping was the CD of pictures. It was easy and angst-free to turn that drawer into a space for things I did need to keep.

And then there were the Heelys wheels.

I have no idea why there were six wheels in that pile of stuff.  But I do know I would never have found them if I was looking for them. Now, to be honest, I’m not even sure if our two pairs of Heelys shoes fit anyone right now. But . . . I do know that whatever happens to them (selling them or donating them or wearing them) . . . we really need the wheels. 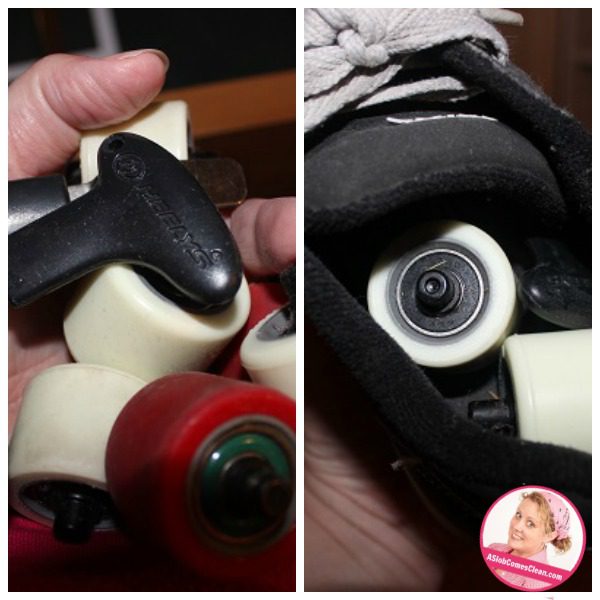 So I took the wheels to the shoes. Right then.

So how does this project answer the How to Declutter Without Making a Bigger Mess question?

Here’s the after picture: 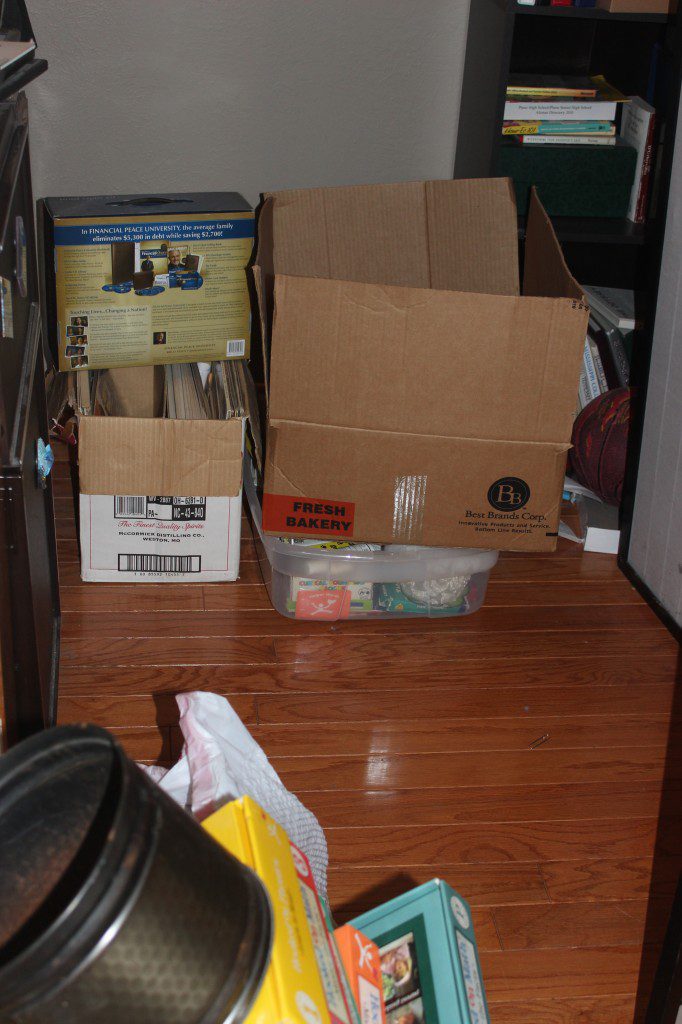 (In the foreground of the picture are the trash bag and Donate Box.)

It isn’t done, but it also isn’t a bigger mess. It’s a smaller mess.

Progress is good. It’s not magazine-worthy, but it’s a huge improvement.

Yes. I need to get back to this project and keep working until the space is clear. But I worked for an hour and made progress, not a bigger mess. Next time I can work on it for an hour, I’ll make more progress. 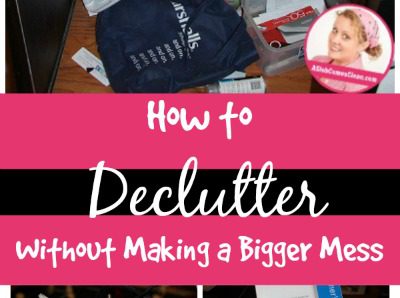