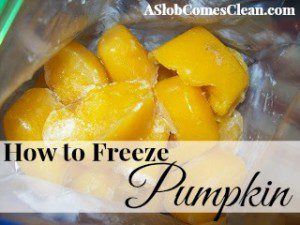 Last week, when we had a fun Pumpkin Day, I had some extra cooked pumpkin that I needed to freeze for later use. 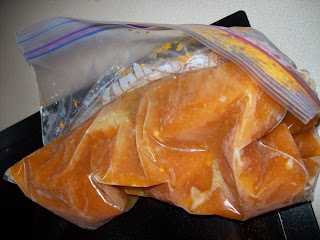 Big glob frozen in a Ziploc bag, with no knowledge whatsoever of the amount or possibility of using only a portion of it.

So I came up with Option Two (which contains an Amazon affiliate link): 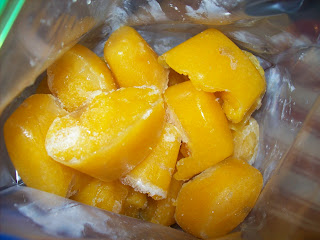 I froze the cooked pumpkin in my handy-dandy ice cube trays. It worked so well for my yogurt-smoothie-kits, that I knew it would work well for this.

I put the cooked and mashed pumpkin in a plastic storage bag and then cut a small hole in one end, like a pastry bag. I squeezed it into the ice trays

, covered them with foil, and froze. 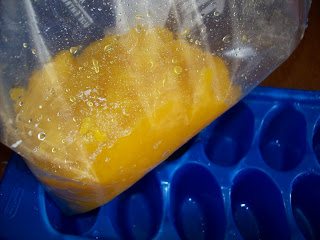 When I started, I put one cup of pumpkin in the bag, and this made 10 cubes. Now, I can pull out the right measurement of pumpkin for a recipe, and don’t have to defrost the huge bag full. I made some more pumpkin muffins with last year’s frozen-pumpkin-glob, and since it was a little over 2 cups, and the recipe called for 1 1/2 cups of pumpkin, I had to add “ish” to the end of each of my ingredient measurements. The new method will make it much easier to get just what I need.

Here are some recipes that I plan to make this fall which will work very well with the pumpkin cubes.

And here’s the link to the pumpkin muffins that I made a second (bigger) batch of to freeze, since they were, ummmm, how should I say it . . . . FABULOUS!!!!! And so easy. I didn’t bother to read the first time that the wet and dry ingredients were supposed to be mixed separately, and since they turned out fine, I didn’t bother with it this time either.

But I will not be making pumpkin soup. I even did the unthinkable and poured out the pumpkin water from when I boiled the pumpkin. While the cheapskate in me cringed, the grown-up-version-of-the-little-girl-whose-mother-never-wasted-a-thing-and-made-many-free-spirited-versions-of-pumpkin-soup might have smiled a little in satisfaction.

Feel free to make pumpkin soup. Just be ready, in thirty-something years, for your daughter to . . . not.

I’m linking this up over at Life As Mom for her Freezer Cooking Days.

I’m also sharing this over at Works for Me Wednesday at We Are THAT Family.