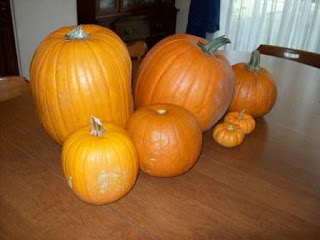 A year ago today I was in awe that we were able to have a fun day of carving a pumpkin and baking a pumpkin pie without spending hours decluttering the dining room table and doing the dishes before we could even get started.

Well, it’s Columbus Day again, and I decided to make it a tradition to designate this first-school-holiday-of-the-year as Pumpkin Day.

Traditions are so much easier to create when your house is clean.  Even cleanish.

And this year we had . . .  not just one pumpkin, but five.  We went to the pumpkin patch on Saturday, and they gave us a small pumpkin for each child, and one large pumpkin for the family.  Add this to the one I had already purchased, and we ended up with quite a bit of work to do.  I let the boys choose recipes from Amy’s pumpkin recipe list over at The Finer Things, so they were very excited.

Since I’ve read that the smaller pumpkins are ideal for cooking, the boys each chose to donate theirs to be cooked in exchange for design privileges on the big pumpkins.  My daughter wanted her little one carved.  We spent the first part of the day washing and gutting and slicing up pumpkins, and after I had cooked them, we set up the dining room table as a workstation and the kids started on their chosen recipes.

It’s quite the wild kitchen when all three are working at the same time.  But since everything was pumpkin, most of the ingredients were similar and that helped a little with the chaos.  I acted as coach/referee, and felt sure that something was going to turn out horribly because of a forgotten ingredient.

Let me say, I was rather shocked . . . that everything they made was delicious!

My 8yo chose to make Pumpkin Pie Pancakes from this recipe over at Feels Like Home.  I let him pretty much do it himself, and I think his kitchen confidence was increased since this was a more complicated recipe which involved mixing dry and wet ingredients separately and adding the milk little by little.  He also felt completely at ease using the griddle since he was experienced at it already. 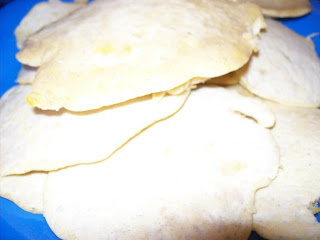 My 7yo made a pumpkin pie.  And it was delicious.

Not just in one of those smile-while-you-chew-so-you-can-affirm-your-child ways, but really truly one of the best pumpkin pies I’ve ever eaten.  Right up there with my mother’s pumpkin pie.  I used the recipe in The Ultimate Southern Living Cookbook

, which is probably my favorite cookbook ever.  It has every real-life recipe I need (not the weird stuff that some cookbooks fixate on), but on a new level of deliciousness.

And, ummm, in case you’ve ever wondered if regular milk would work if you happened to start making a pumpkin pie without reading all of the ingredients and realizing that it called for condensed milk . . . it does.  I just used 2% milk. 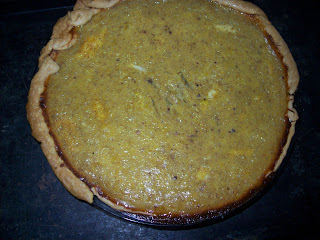 And my 4yo daughter chose to make muffins.  We used this muffin recipe over at Kelly’s Favorite Recipes.  These muffins were fantastic, especially with the cinnamon/sugar sprinkled on top.

And they’re easy.  Unlike my 8yo, who gained confidence by making something more detailed, my daughter doesn’t need anything to help her gain confidence in the kitchen. 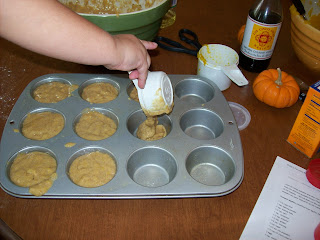 I was amazed that hers turned out so perfectly. 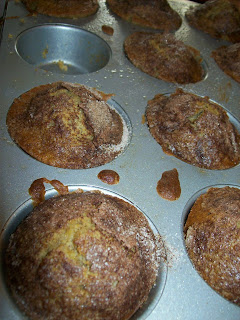 Even when I have to clean up this: 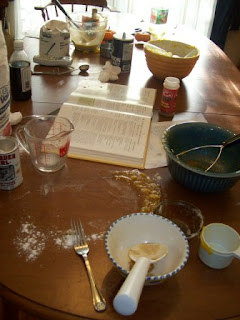 I feel a sense of thankful awe over my deslobification progress of the past year.  Though I still have so far to go, the fact that my house was orderly enough to allow spontaneity and big projects to occur all in the same day . . . without the need for crabby-mood-inducing kitchen cleaning and decluttering first, is huge.

And for this to happen two years in a row???

I’m linking this up to Works for Me Wednesday over at We are THAT Family, because the desire to create a tradition . . . .syncing up with the ability to do so, totally works for me.