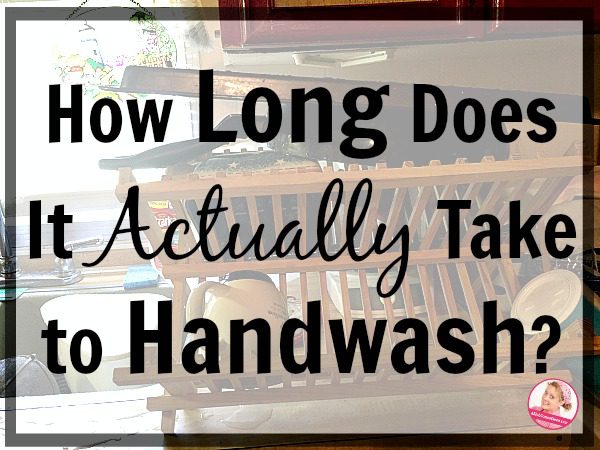 Unless you’re brand spankin’ new around here, you know how I feel about doing the dishes. I don’t love it and never will, but I know for a fact (from experience) that doing the dishes is THE thing that will get any house going on its deslobification process.

And NOT doing the dishes is (logically) the very best way to produce the opposite effect on a home. The re-slobification or continued slobification of a home.

I based that previous post on my own week-at-a-time experiences cooking daily but not having an automatic dishwasher at my parents’ place where we stay at “the lake.”

But last summer (I do NOT know why it took me so long to write this post!), I went further and did some official research. Like, science project type research. Like, take pictures and write-down-data-after-every-meal-for-the-entire-time-we-were-there research.

Partly it was for y’all. Mostly, though, I just need (again and again and again) to eliminate my own excuses. I am awesome at coming up with amazing excuses, even when I know exactly what needs to be done.

I wrote down the meals we ate and the time it took to handwash the dishes we used for each meal. Occasionally, I also wrote down how I felt about it.

I recorded what we ate so you can get a real idea of the time required for the type of cooking. They’re all simple meals, but I don’t get very fancy at home anyway. (See my recipes here.)

Timing myself doing tasks I dislike is my very best strategy for combating my T.P.A.D. problem. Time Passage Awareness Disorder. I talk about that here.

We used paper plates and cups. I don’t use paper products at home, but we were on vacation. And I’m not that dedicated.

How Long Does It Take to Handwash Dishes? 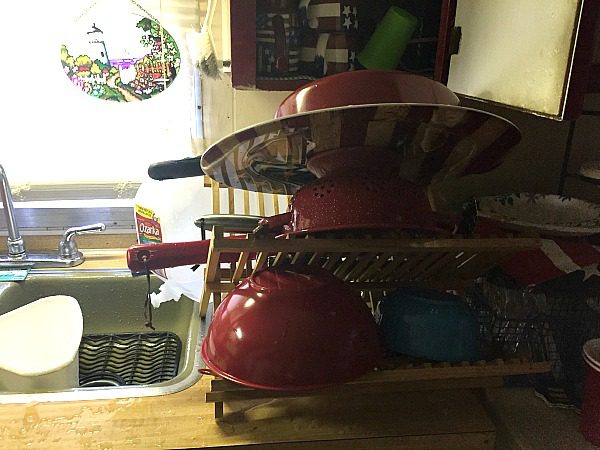 Meal: Ribs and Chicken Breasts on the grill, fruit and buttered noodles. 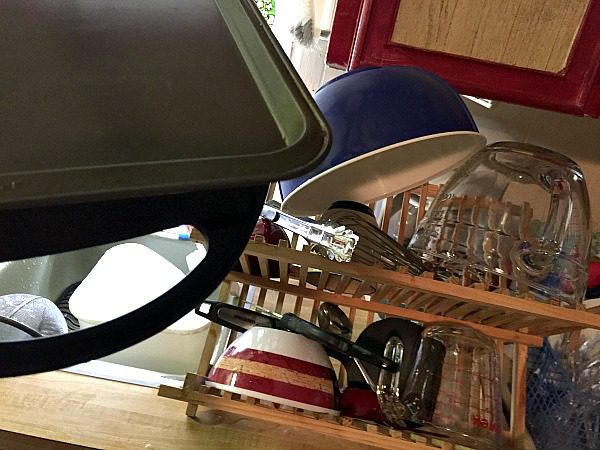 Meal: Pancakes and Bacon (bacon was cooked in the oven on a cookie sheet covered in foil)

Dishwashing Time: Less than 10 minutes, including drying and putting away the griddle and the cookie sheet because I couldn’t balance them on the drying rack.

Includes time spent trying desperately to balance the griddle and cookie sheet on the drying rack to avoid having to dry and put them away immediately. Also included wiping down the counters.

Note from myself: “It turned 9:30 as I looked at the clock.” I assume this means I started at 9:20. And was intent on being clear that this took LESS than ten minutes. Including wiping down counters.

Did you catch that I also wiped down counters? OK. Good. 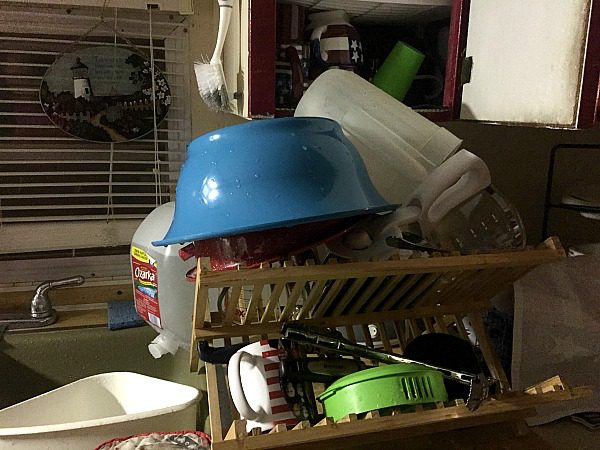 Day 2, Meal 2 (I assume we picnicked for lunch like usual): lasagna, salad

Notes to myself: I was excited about the disposable pan for the lasagna. I did NOT want to do the dishes. I wanted to go to bed. 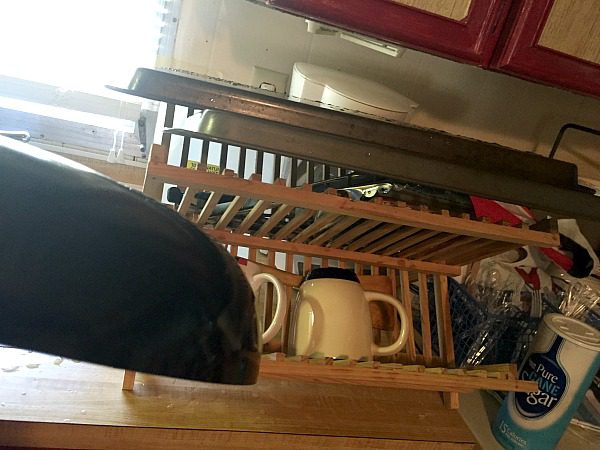 Time: 6 Dread-Free Minutes including wiping down cabinets and drying and putting away the large skillet. 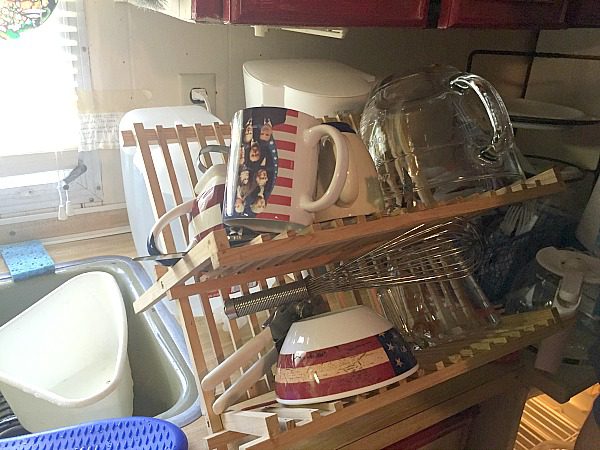 Time: 10 minutes “including washing a tray from the ‘island.'”

Thoughts: Obviously, I felt quite the martyr washing that tray. That extra tray. That tray we technically didn’t eat off or serve from. Rude tray. Dared to get dirty. 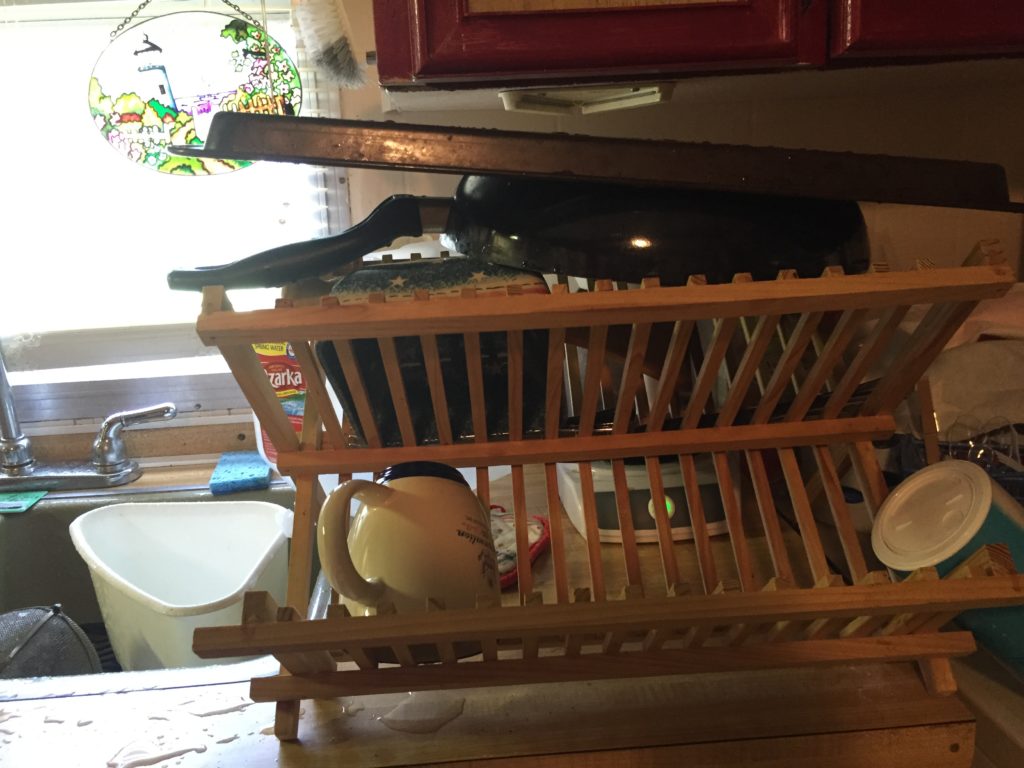 Time: 9 minutes with help (from my kids), “including wiping up of splashed counters/floors from overzealous washing”

Thoughts: I wrote down that this dishwashing included 5 mugs which we used for the “dip” part of the French Dip Sandwiches. I assume (months later) that I had someone dry those mugs and put them away since they aren’t in the photo.

But I did clean it up. And even without knowing exactly how long it took to clean up that particular meal’s dishes, I know for a fact it was way (WAY, way) less time than I’d have needed if I hadn’t done the dishes after each  meal for the previous four days.

Clarification #1: Yes, I noticed (while writing this post, obviously not before taking pictures) that the cabinet door is open behind the dish drainer in some of the photos. It happens in my world.

Clarification #2: I’d normally pull the family in on these dishwashing sessions, but I was so focused on timing things that I guess I forgot. They didn’t complain one bit about being forgotten. And honestly, it would have probably taken longer to have them help since we weren’t in “our” kitchen.

Clarification #3: We do not eat such huge breakfasts every day in our normal lives, but while on vacation at the lake, Hubby makes big breakfasts. It’s his thing, and we all love it.

I have preached the “One Day’s Worth of Dishes Takes Ten Minutes” thing so much (do you have my book?) so it was gratifying (and told-ya-so smirk-producing) to prove that the concept is still true when handwashing. Obviously, using non-disposable cups and plates would add time.

I would LOVE for you to time yourself doing one day’s worth of dishes today (however you do them) and report your time here in the comments. 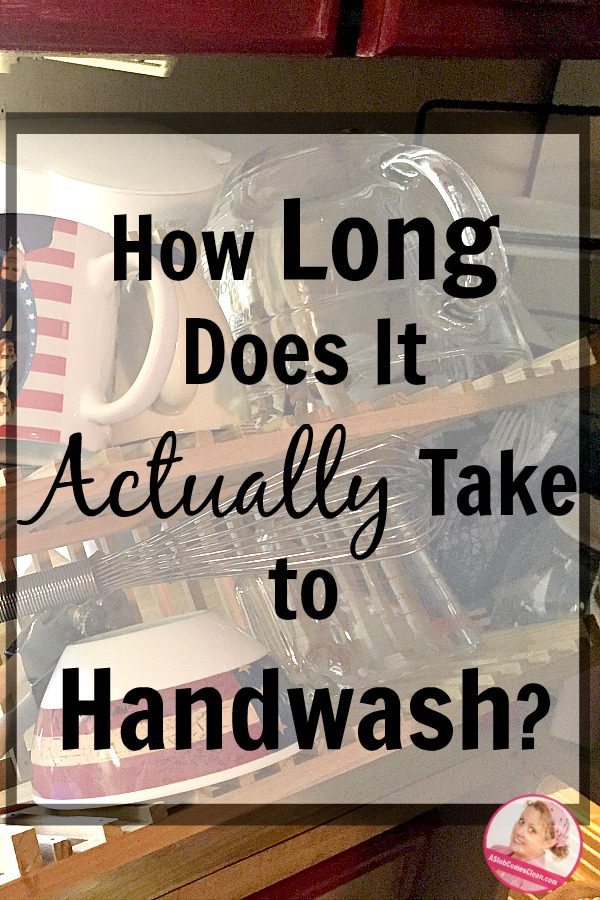