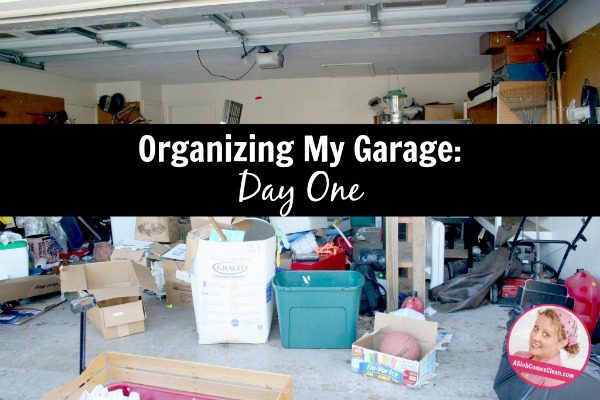 Did you see “Day One” in the title?

Meaning . . . this was a two-full-days-plus-part-of-a-third project?

I despise multi-day organizational projects.  Just the thought wears me out and makes me feel that someone like me could never possibly finish. 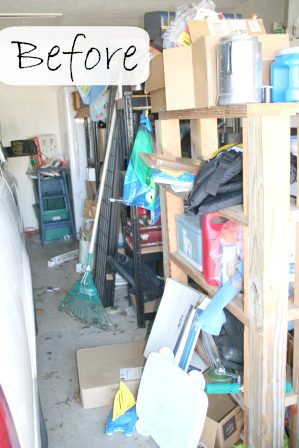 Since I began this deslobification process, I’ve mostly done one and two hour decluttering projects, occasionally a three to four hour job on majorly-messed-up spaces like the laundry room or the playroom.  Generally, I’m amazed that things don’t take as long as I imagine they will.  And each small project makes a big difference and gives me motivation to tackle another project on another day.

But there was no getting around the fact that my garage was going to be a huge project.  It’s a storage space.  Which translated, means . . . the place where anything that doesn’t have another home gets stuck.

As I’ve worked to change my slob-brain, I have improved my decision-making and the garage wasn’t filled with as much I-don’t-know-what-to-do-with-this-but-surely-I’ll-need-it-someday-so-I’ll-just-stick-it-in-the-garage stuff as there could have been.

I choose to be proud of that.

I’m calling last Friday Day One.  The day when I did the easy stuff such as hauling off the things that had been waiting forever to be hauled off . . . doesn’t really count.  Last Friday I put on my comfortable shoes, my dust mask, stood at the door and stared at the huge job in front of me, and then got down to business. 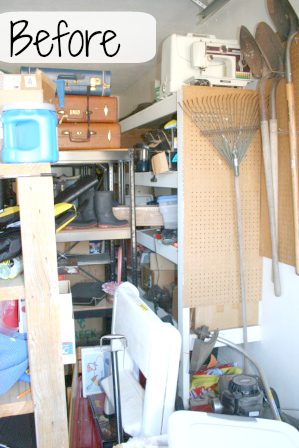 I decided to start with the right side of the garage.  I’ll call it The Side of Good Intentions.

In past organizing attempts (back when keeping was more important to me than purging), I had added 5 shelving units to the one very-large-already-built-in-when-we-moved-into-the-house one.  So that we would theoretically be able to get to everything on these many shelves, they were placed perpendicular to the built in unit, and the result was that our garage looked very much like a store.

Going back to the basic cleaning order concept I use when I’m completely overwhelmed, I set up a trash can and designated a large box for donations.  (The story of why such a large box was completely empty will have to be its own blog post in the future.)

I began with the first shelf, and everything on it (except that box on top) went in one of those two containers.

Mmmm-hmmmm. Not a single item on that shelf did I decide to keep.

The box on top presented a dilemma.  As an easily distractible cleaner/organizer, my first reaction was to not even look inside.  I had to go for overall organization here, and stopping to go through (many, many) individual boxes would be a recipe for failure. 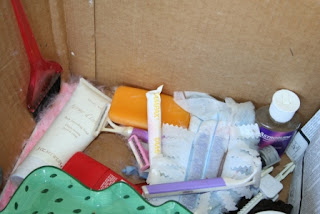 Yes, people . . .that’s a half-bar of soap, the thing from when I tried to color my own hair, and some stuff over in the corner which I won’t be typing the name of, because I just don’t want the kind of readers that those google searches would bring.

I decided to keep a few of the items, and designated my newly emptied shelf as the “spot to put the things which have a definite place to go in the house.” 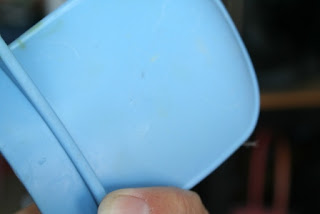 Once I had completed this shelf, I started to feel like maybe I could actually do this garage-clean-out thing.

I could feel the fruits of my brain-changing-efforts of the past year and a half.

Decluttering is getting easier.  I’m better at it than I used to be.  “What-ifs” still plague me sometimes, but I’m generally able to talk myself through the decisions that have to be made.  I kept going back to my two decluttering questions:

Where is the first place I would look for this item? (Now go put it there.)

If I needed this item, would it ever occur to me that I already have one, or would I just go buy a new one?

I don’t think that I could have tackled the garage as my first project in this deslobification process.  I wasn’t ready at that point.  Dealing with all of these “final decisions” is not something for newbie-recovering-slobs.

With the confidence I was gaining, I started working my way through the other shelves.  I found all kinds of interesting things: 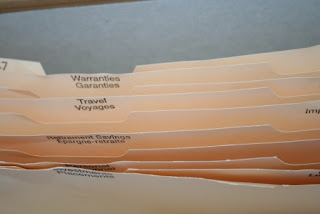 A mostly empty accordion file that I’m sure I  thought would solve all of my problems.. 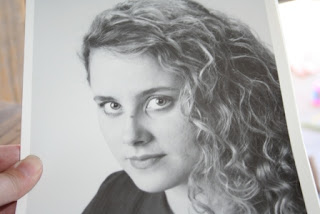 An envelope full of headshots from my wanna-be-an-actor days. 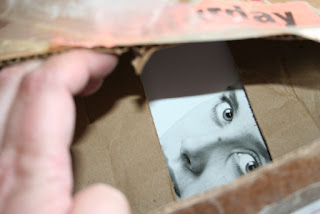 A box full of the other 452 headshots.

So . . . I began a not-sure-what-exactly-I-should-do-with-these-things pile.  I did my best to only put things in it that I truly wanted to keep.  Like my sewing machines. 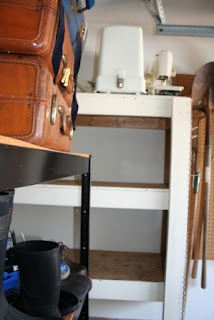 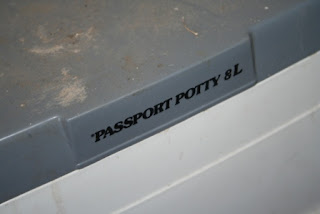 I got through almost all of the shelves on that side, dividing things into keep, donate, trash and don’t-know-yet piles.  At that point, the day was gone and I was exhausted. 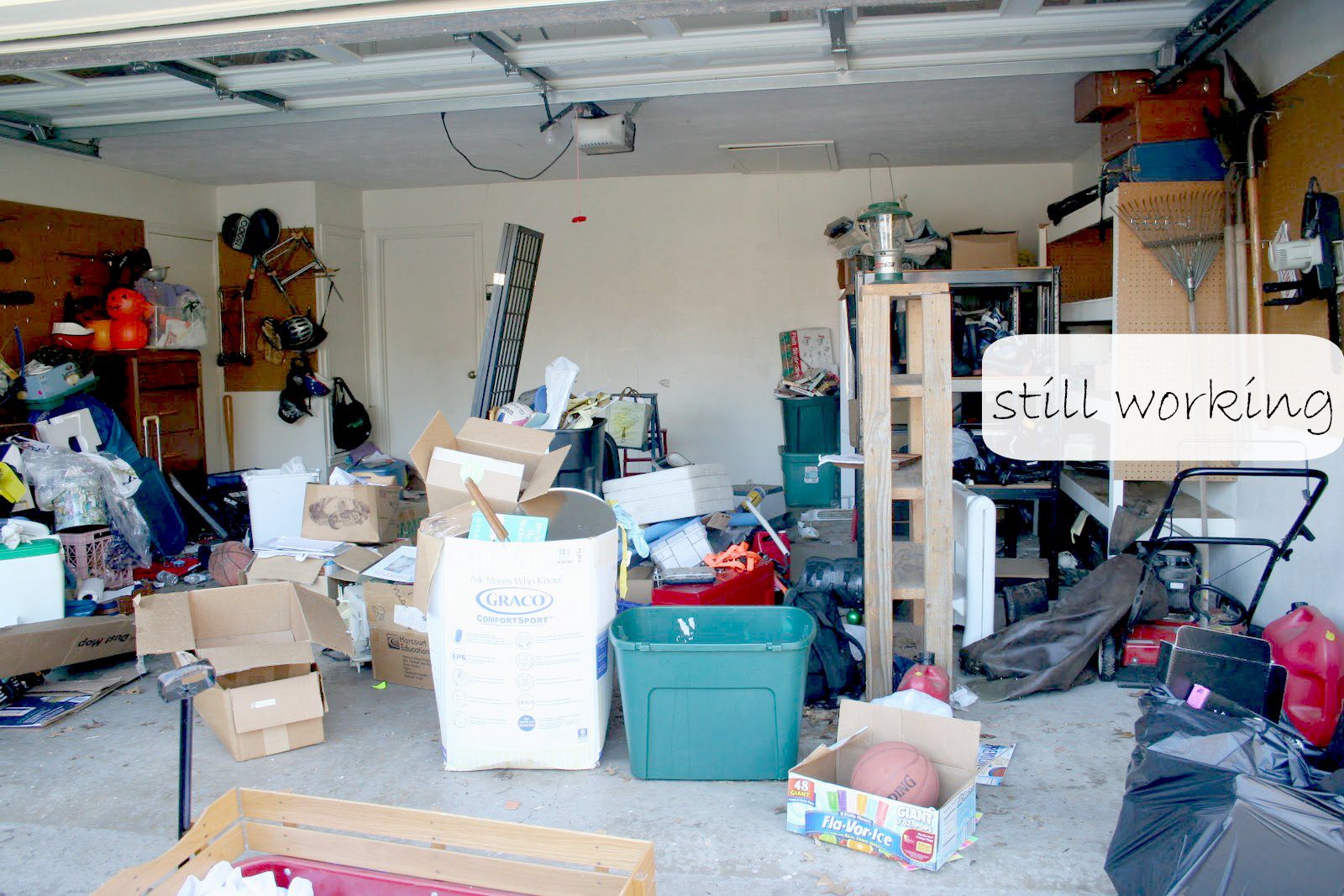 Not exactly an after picture.

Part of me was frightened.  Pre-blog, many pull-it-all-out-in-the-middle-of-the-floor projects remained unfinished for long periods of time, and this sort of project would have resulted in going back in time to our can’t-park-in-the-garage days.

But I had set aside all day Saturday to work on this project as well, and honestly . . . I was getting excited.  The picture doesn’t look like anything to be excited about, but I could see the progress.

Many decisions had been made.  Two entire shelves were emptied and it looked like I wasn’t even going to need them once I was done.

Tomorrow I’ll share the progress of Day Two, and on Thursday . . . the finished project!

Be sure to check out the organizing projects of the other Spring Spruce Up bloggers, and remember that we’ll be hosting a linky on Thursday for you to share your own Spring Spruce Up project blog post! And don’t worry, your post can be about any room, any ONE room!  We divided it up so you could get inspiration in whatever area you’d like to tackle.