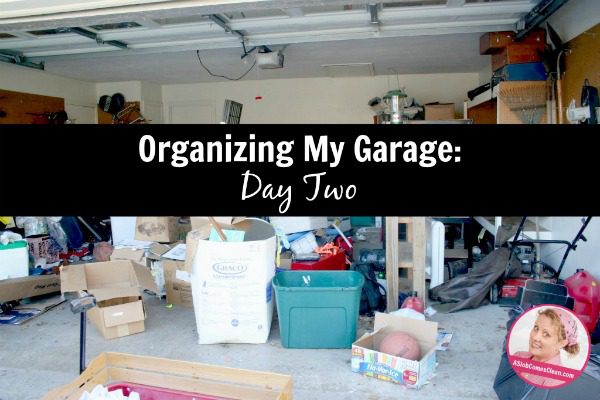 Saturday morning I was ready to get to work.

I was excited about Friday’s progress, and I felt that this was going to be the day when I would see real change.

After spending 30 minutes looking for the dust mask I wore the day before (which I still haven’t found), I decided to go with one that very well may have been worn by my husband during my third c-section. 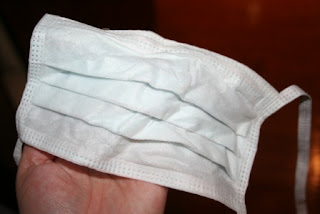 It smelled a little like a dentist’s office, but it worked.

The overall view of the garage when I started on Saturday morning was this: 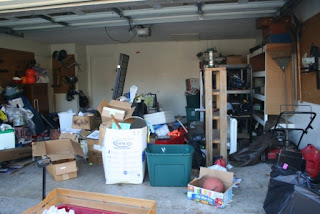 But the more encouraging views were these: 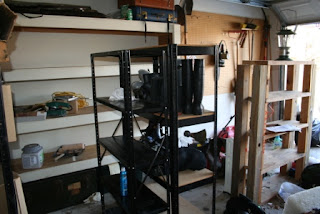 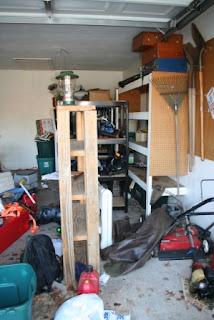 LOOK at all that empty space!

Of course, there were lots of piles on the floor waiting to be dealt with. 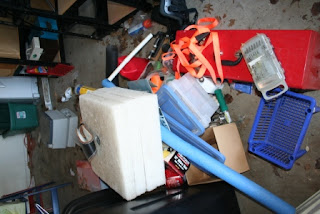 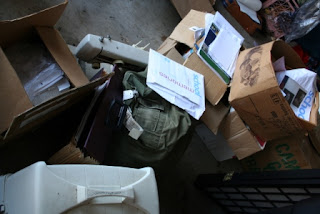 There was also the matter of this shelf: 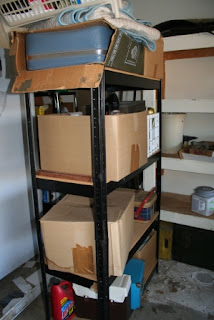 The one piled high with boxes full of to-be-dealt-with-later randomness.  I decided that there were enough of these boxes to warrant the designation of this shelf just for them.  I moved things off that didn’t qualify, and started moving similar boxes onto it from the do-NOT-ask-me-right-now pile.

The existence of that shelf is not ideal.  But it’s my reality.  Over the past year or so, hubby and I have cleared out many such boxes, but we have a long way to go.  The only way I know to deal with them . . . is one at a time.  My hope is that we’ll one day soon be able to do away with that shelf completely.

Now, it was time to start putting things back. 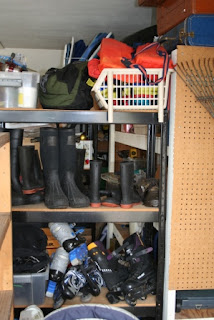 My main goal was to establish a “spot” for each thing that really did need to go on the shelves.  I started designating certain shelves for various things such as rollerblades (and related safety items), lake stuff (wouldn’t it be great to be able to just grab what we need when it’s time to pack up) and rain boots. 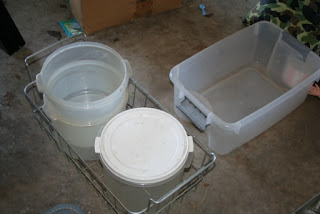 I used to be a Theatre teacher.  I still direct the drama at my church, and do the occasional production. 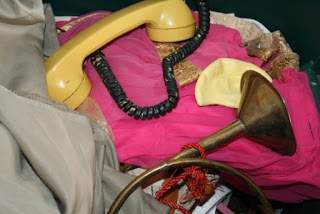 Like a phone.  Or an alien ear.  Or a little horn.  All totally useful to someone like me.  And then there was the thing that every self-respecting director must have: 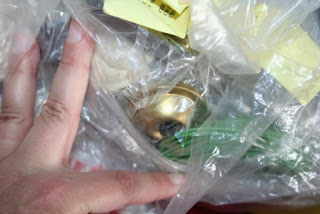 A doorbell.  I mean, it simply is not possible to get the timing and the comedic effect correct with a mere CD!

I ran across most of these things inside two bins full of props and costumes, which I had incorrectly assumed were full of things to be donated.  Once I realized what they were, and that they were in a place where I could justify keeping them, I decided to do something crazy. 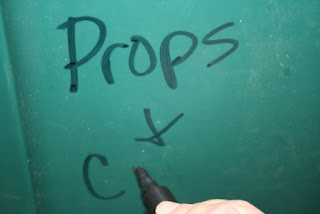 I know, a totally life-changing concept.  Now, if I need that doorbell  . . . I know where to look.  (Or at least where to start looking.)  And as I’m sure any organized person understands, it felt so good to immediately know where to put any other props or costumes I ran across.

I put the painting stuff in one place, tools in another, and I even found the perfect spot for . . . . my camping potty. 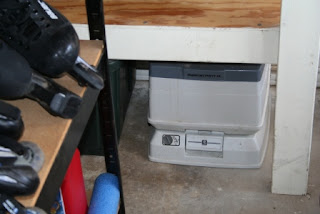 I was almost done with this side of the garage, but I was scared to death to pull out one last container that was at the bottom of the built-in shelves.

Why I was so scared, I really don’t know.  I think I was feeling good about how well the organizing was going, and I was afraid to find another big container full of things to deal with.  I literally held my breath and pulled it out. 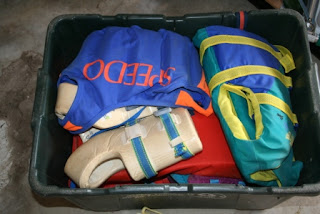 Life-jackets.  Obviously, from an organizing attempt of days past.  (Another example of the necessity of labels.)

I purged the too-small ones, and put the others on the “summer stuff” or “lake” shelves. 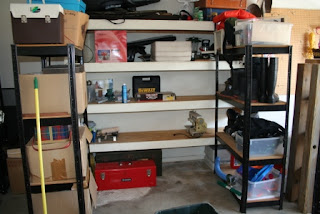 Now that this side was mostly done, it was time to decide if I was going to venture onto the other side of the garage.  It would totally be possible to strategically take pictures of only the right side.

But I was feeling the momentum.  I decided to keep going. 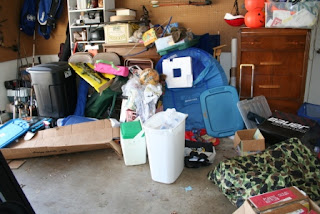 I purged this too-cool shelf of all but two things.  It was completely filled (can’t believe I didn’t take a before-picture), but every single thing was deemed un-needed. 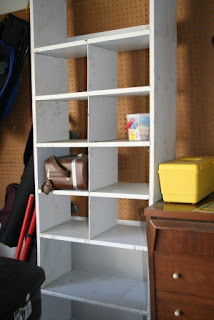 I decided to use it for hubby’s fishing stuff, which was piled right beside it. 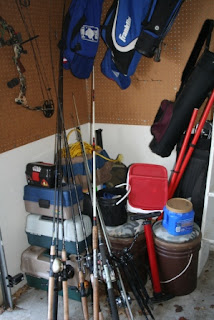 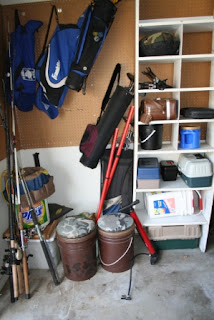 This side went more quickly because I was able to move things to their proper prop-box or designated-spot-on-the-shelf.

Finally, when I decided to quit for the day, almost everything had a real home, and trash and clutter had been purged.  I still had some cleaning and final touches to do, but the visible difference was huge.

My advice for the day?  The old cliche about having a place for everything isn’t just something organized people say to make people like me feel bad.

And the more established places I had, the easier the rest of the project went.  I’m pretty sure that’s how organizing momentum works!

Tomorrow, I’ll share what I did on Tuesday, in just a few hours of working on details.  You’ll see the final “after” pictures, and I’m planning to declare that my garage is . . . organized.

Here’s the link to my post with the final “after pictures!

I’ll be linking this up over at Orgjunkie.com‘s 52 Weeks of Organizing. 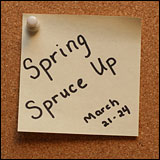 Don’t forget to check out the progress and tips that the other Spring Spruce Up bloggers are sharing.  And tomorrow we’ll post the linky so you can share your own Spring Spruce Up post!  I can’t wait to see what you all have done!

Read Newer Post My Garage is Now . . . Organized! (With "After" Pictures!)
Read Older Post Organizing My Garage/Storage Space – Day One