(Welcome to a stream-of-consciousness post that may or may not end with a profound revelation.  Your guess is as good as mine.) 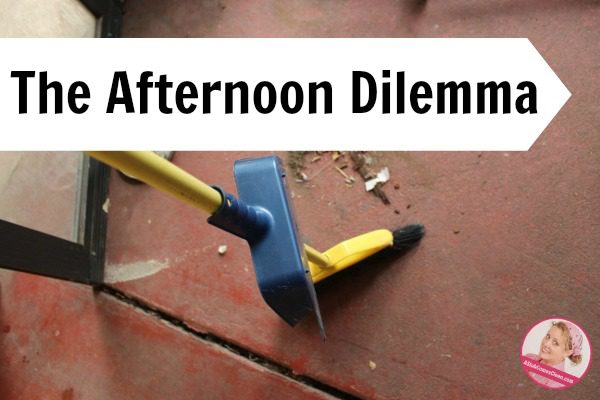 I arrived home from my Bible Study with an hour before school pick-up time, and had to shower.  Y’know, since a sweetie-pie picked his nose while sitting on my lap.

Anyway, I spent those last few minutes before braving the carpool loop reading comments and checking out those of you who linked up for the Decluttering Update.  (By the way, GO YOU!!!)

When I got home, I was faced with the dilemma.  The Afternoon Dilemma.

See, I’ve been struggling lately.  Even though I could fill a notebook with a list of all the things I said “No!” to for this school year, I still blurted out way too many yesses.  Don’t worry, I’ll be exploring that in the days to come. Because of all those yesses, I have lived the past month (+) in a state of constant behind-ness.  I live every day behind, and end every week . . . totally behind.  And as I’m sure happens to normal people, and happens-times-ten to slobs, all housekeeping routines and such fall to the very bottom of the priority list.

I have managed to still get most of the laundry washed (though not folded), and run the dishwasher almost every night.  These things, plus two years of decluttering, plus an occasional pick-up . . . mean that the house is way better than it ever was pre-blog, and light years ahead of similar crazy-life-periods pre-blog.  Normal people wouldn’t (and don’t) believe that to see my house right now, but I’m pretty sure that any kindred spirits out there know what I mean.

I’m currently committed to being out of the house two days a week.  One of the days that I’m home is spent doing a weekly freelance writing project.  That leaves two days to do everything else . . . unless I say yes.  Yes to anything.

If I have a dentist appointment, a teacher conference, and a day (or two) working at the book fair, suddenly my entire week is gone.

I can say no as much as possible, but I also have to do what I dread:  Housework at times that I don’t view as Housework Time.

Things have changed.  I’m not living the life that I lived for almost ten years as a mother of pre-schoolers.  I don’t have the it’s-important-that-my-kids-are-home-and-that’s-when-I-get-my-cleaning-done thing going anymore.  I have to either decide that I will never commit to doing ANYthing at X time, because that’s when I clean my house, or I have to fit cleaning in during times when I used to consider my Toddler Day over.  Like that drowsy part of the afternoon when I’m answering homework questions and making supper.

Or a combination of both.

Here’s the thing.  It was hard enough to develop a cleaning/housework routine in the first place.  But once I did, I was so glad.  I don’t like living this way, even if it is SO MUCH BETTER, so I need to figure out the new routine for my new normal.

We’ll see how that goes. 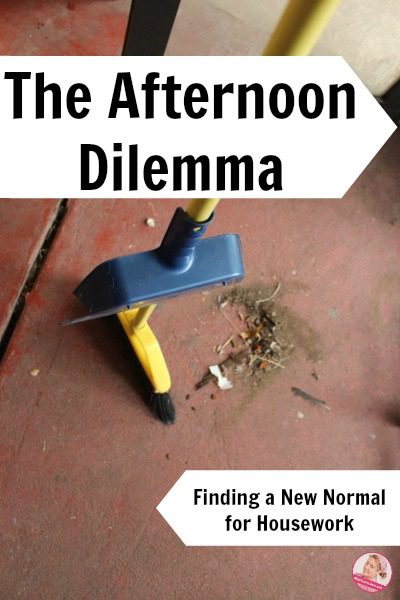