The smartest thing I did when I began this deslobification process was to focus on the kitchen and figure it out before I worried about anything else. I now know how to keep it clean.

Not that I always do.

But the thought of involving my kids in the process by using a Daily Kitchen Checklist makes me nervous. 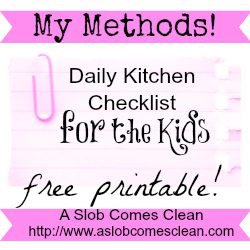 Forgive me if I’ve already told this story. I searched “kids dishes group cried” and didn’t find a post matching all of those words.

Years ago, when my oldest was younger than three-and-a-half (I know because that’s how old he was when we moved and I remember that I was wearing a sweater, so it was winter) and my second was less than eighteen months old, I attended a moms’ group. I was in charge of creating the conversation-starters for the table groups. I assume that my prompt was something like, “What are your best tricks for keeping your kitchen clean?”

Hmmmm, such a shocker that I would one day become “Nony the Slob.”

Anyway, as I tend to do, I attempted to get the conversation going at my table by being very open and laughingly admitting that . . . I didn’t have any tricks! My kitchen was a mess!

While most of the women at the table looked understanding, one woman was shocked. She began asking questions like, “Don’t you wash your dishes immediately after each meal?” and “How can you sleep knowing the kitchen looks like that?” and “Don’t your kids  put their dishes in the dishwasher?”

And making statements like: “My kids, even the two year old, know that they have to take their dishes to the sink.” “The others know they had better get those dishes in the dishwasher!” “

And asking more questions like: “How can you expect them to respect you if you do all of the work?” “What does your husband say?”

It was an attack on me. Everyone at the table was uncomfortable (except her) and I kept trying to smile while I lamely defended myself.

And while I knew that I “struggled with housekeeping” and had just admitted it, my breathing was affected by the fact that she was accusing me of being a bad wife and mother.

The two responsibilities that I am more passionate about than anything in the world.

I made it through the meeting, left quickly, and retrieved my two boys from the nursery. I was trying to get out of there before the tears that I was holding back began to fall.

At least one person came to check on me. This attack wasn’t just in my head.

I remember the sweater I wore because she caught me and tried to say something nice about it. I’m guessing she realized how she had come across.

Here’s the thing. Even though I have come a very long way in this process, I still haven’t trained my kids to automatically put their dishes in the dishwasher.  One of you asked the other day about whether we’re still using our Kids’ Daily Checklist.  I was honest and answered that we go in spurts.  The kids do well for a while, and then it fizzles.  When they decide they want something that costs money, they get going again.  I’m glad that the system has the power to re-motivate them without depending on me to remember.

Because counting on me to remember . . . doesn’t work.

I don’t remember to take my dishes to the sink.  I get up from the table after a meal, and it rarely occurs to me to clean up right then.  So I definitely don’t think to remind my kids to do it.  I depend on my experience-based-knowledge that I have to run my dishwasher every single night to remind me to get it cleaned up.

But I want it to be a habit, both for me and my kids.  So it’s one of our areas of focus this summer.  Since I’m trying not to over-complicate things, I created this simple Kitchen Checklist.

I decided (based on not-so-positive experience-based-knowledge) to park myself at the sink to act as kitchen director.

There are three tasks that everyone must do:

Put dishes in dishwasher.  (I’m there to act as the scraping police.)

There are three tasks that are assigned to individual kids for one week at a time:

This morning, as we worked on these tasks together, I was both encouraged and ashamed.

My kids happily did their tasks.  They pitched in, and did a great job.

You can print my kitchen checklist here.

I’ll be linking this up at Raising Homemakers.