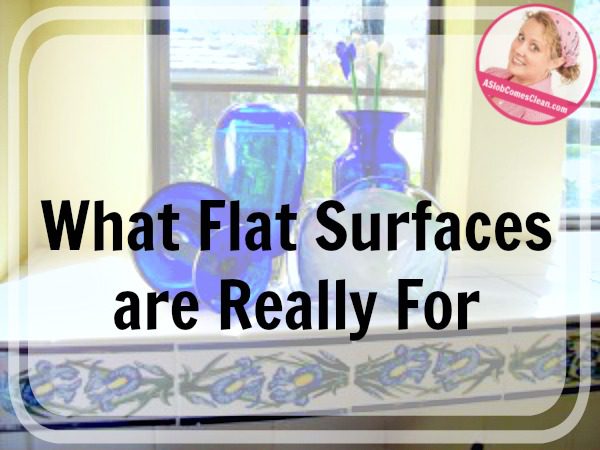 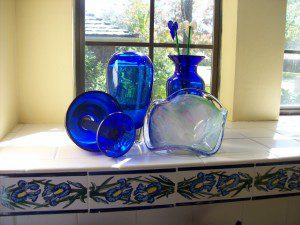 I see them, and only see the positive possibilities.

But I forget one feature that sabotages these visions as soon as I bring the item into my house.

And no flat surface is safe in the home of a slob.

The other side to this problem (a side rarely noticeable to human eyes other than a mother-in-law’s) . . . is dust.

I am allergic to dust. I was only given the much-coveted (and now obsolete) job of chalkboard-eraser-banging one time.  After my eyes swelled shut and my ragged breathing disturbed the rest of the class . . . the teacher took me off that list.

Being a slob and allergic to dust . . . puts me in a bit of a difficult spot.  When things pile up (see how I say it like it’s the things’ fault?), I can’t see the pretty stuff underneath the pile.  And I can’t see the dust.

But my allergic-and-paranoid brain knows it’s there.  And my dust-allergy becomes one more excuse in a long line of excuses for not tackling a tough spot.

In my deslobification process, I’ve learned that this clutter/cleaning thing is a big cycle.

Thankfully, the circle can also work in my favor.

If I put effort into creating a beautiful space, one that makes my heart smile every time I pass by, I’m less likely to absent-mindedly place one thing on it, and then another, and another . . . until it’s an ugly space.

When I see the beauty, I also see the dust. It is obvious because it doesn’t belong there.  (Obvious in a way that scissors and two-holidays-ago-party-favors somehow are not.)  And I’m ever-so-much more likely to grab my duster when I only have to go from “Hmmm” to “Wow!” instead of from “How-do-I-let-it-get-this-bad-what-is-the-point-of-even-trying?!” . . . to “Wow!”