Baseball season is almost over!

As crazy as that time is, we’re sad.  When your kids love something as much as our boys love baseball, you can’t help but grieve a little that another year of this phase of life has ended.

I said at the beginning of the season that I was going to do a picnic series, using this blog as motivation to be creative and keep ourselves from grabbing fast food on double-header evenings.

Except for the one pizza night, we did it!

But I’ll admit that last week I was beginning to run out of ideas.  I asked hubby if he could think of something that would be good, and he suggested wraps.  When I wrote out the menu plan, though, that didn’t sound good.  I wrote . . . burritos.

I compromised.  I made Chicken and Black Bean Burritos.  We’ve had these as tacos before, and like them.  I just made up the “recipe” but I’ll share it here.

One can of black beans.

One packet of taco seasoning.

I used two breasts that I had grilled a few days before.

I chopped them up and added about 2/3 of the can of black beans.

I added the seasoning packet and only 1/3 cup of water instead of the 2/3 the packet called for.  I wanted to keep them from being too soupy.  In the future, I’ll probably use only half a package of seasoning.

Since everything was already cooked, I just heated it all through and then assembled the burritos.

I put the lettuce down first so it wouldn’t fall out as much when folding.

Really, folding was the hardest part.  With later ones, I found that if I left more room at the bottom, it folded better.   Wrapping them in foil helped a lot too.

These were a hit with hubby and me.  And the kids didn’t complain, so I guess they liked them.  (They’re so busy at the game that I don’t get a chance to watch for their reactions.)

We will definitely make these again! 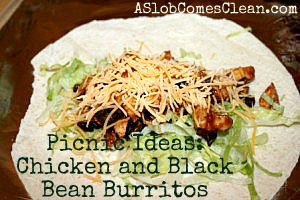 Now for this week’s menu plan.  We’re heading out on vacation on Friday, so my goal this week is to have super-simple meals so I can focus on packing.

Wednesday – Pizza Pockets (These aren’t super simple, but the kids requested them for our last picnic supper.  I’m thinking of trying an easy version of them.)

I’m linking this up over at Orgjunkie.com for Menu Plan Monday. 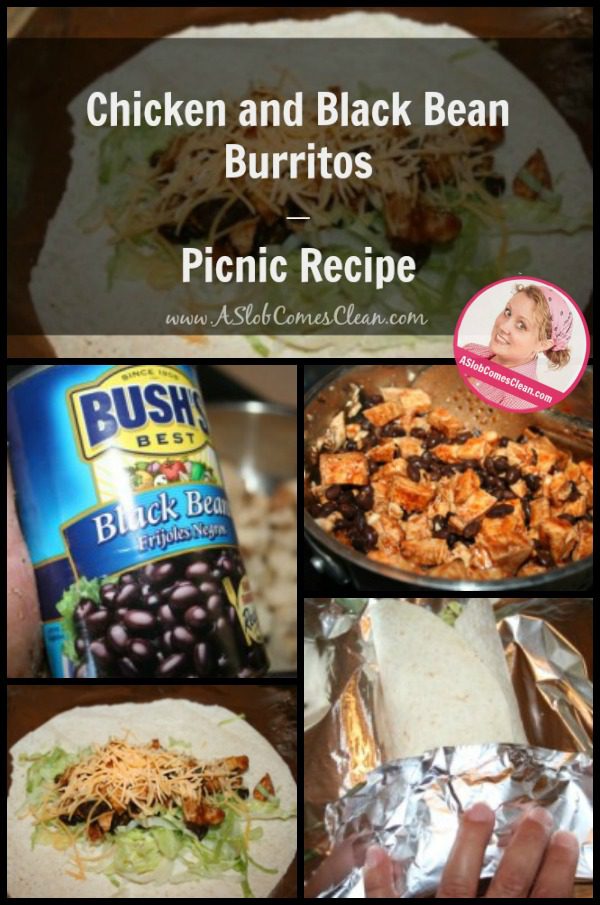 Read Newer Post My Daily Kitchen Checklist for the Kids – Printable
Read Older Post Taking a Moment to Contain Myself, or at Least My Stuff