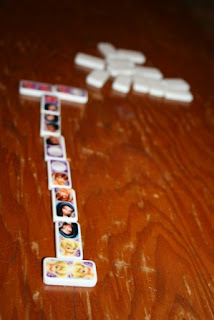 I’ve admitted it before.

Since our home lacks a mother who can remember to say, “Put that away before you . . . come-to-dinner/get-out-a-new-toy/start-doing-cartwheels-in-the-dining-room/whatever-else-you-can-think-of,” I just avoid these kinds of toys.

They always seem to end up scattered around the house, completely forgotten until the sole surviving piece gets found under a couch.  And at that point, there is great sadness because all the other pieces have already been lost.

So, when my four year old was desperate to spend her dollar on something from the Junk Bins Dollar Spot at Target, I did my best to talk her out of the Disney Fairy Dominoes.

Even though they now reside in a cream cheese box, they are carefully put away after each game-time, and fairly regularly remembered.

And they’re fun.  They feel like real dominoes, and the concept is exactly the same.  So, my daughter is learning strategy, observation and the ever-so-challenging art of gracious-losing.

And I, the slob-mama, am learning to not force my own issues on my children, and to let them figure out for themselves if they can handle toys-with-teeny-tiny-parts.

At least not as much.