Did you know that today, June 8th, is World Oceans Day?

I’m happy to serve as a Dawn Wildlife Ambassador since I’m already a fan of using Dawn to clean way more than dishes in my own home.

I also love Dawn’s commitment to working with wildlife rescue organizations. This relationship began after bird rescuers determined that Dawn was by far the most safe-while-effective product for cleaning birds affected by oil spills.

Through working with Dawn, I’ve also been educated on the impact everyday life in my town (that’s hours from a beach) has on the oceans. 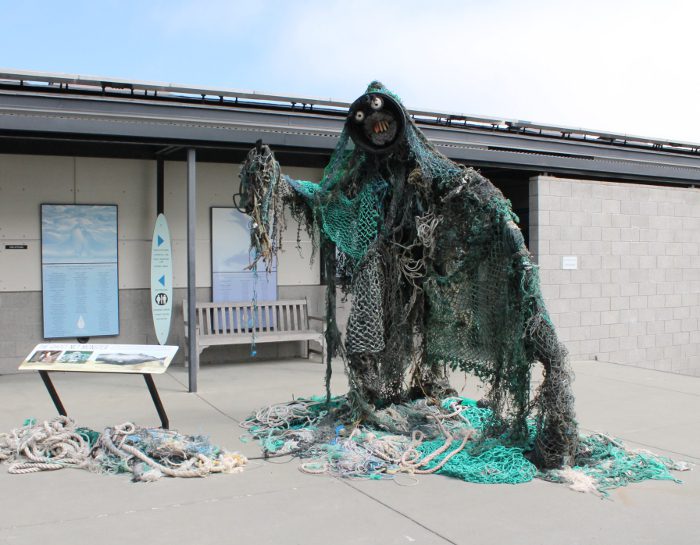 Thank you for the photo, Beeb! (MomStart.com)

This trash monster sculpture at the Marine Mammal Center in California includes trash you’d expect to find in the ocean like nets and ropes, but also other trash that makes its way to the ocean from places where people never hear waves crashing or smell the tang of salty air.

Before my trip to the Marine Mammal Center with Dawn, I’d never thought about the fact that the garbage I see flying around my street on a windy trash day ends up in the ocean.

So how can you participate in World Oceans Day if you’re landlocked?

Go on an ocean saving nature walk in your own neighborhood! Talk to your kids about their ability to impact ocean wildlife by their actions where you live.

Remind them that when you tell them to pick up their trash and put it in the trash can, that’s the first step to not contributing to the trash that litters the ocean and often injures wildlife when they eat it or get tangled in it.

Windy Tuesdays are the worst in my neighborhood. Tuesday is trash day and wind blows trash cans out into the streets. So even something as simple as properly closing the trash bags and cans is important to keep the streets (and therefore the gutters and ultimately the oceans) free of trash.

while you’re wishing you were on the beach, take a bag with you on a family walk today, pick up any trash you see, and talk about how you’re not only helping your own neighborhood, but the oceans of the world!

And watch these Dawn Helps Save Wildlife videos together! I had the privilege of attending a release, and I can tell you that the people working with these animals LOVE what they do!

I’m a paid Dawn Wildlife Ambassador, but all thoughts and opinions are mine. Dawn partners with the International Bird Rescue and The Marine Mammal Center to form the Dawn Saves Wildlife initiative.

Read Newer Post Speaking Dates and SUMMER!!!
Read Older Post Walking the Deslobification Journey Even when Husband Isn’t on Board