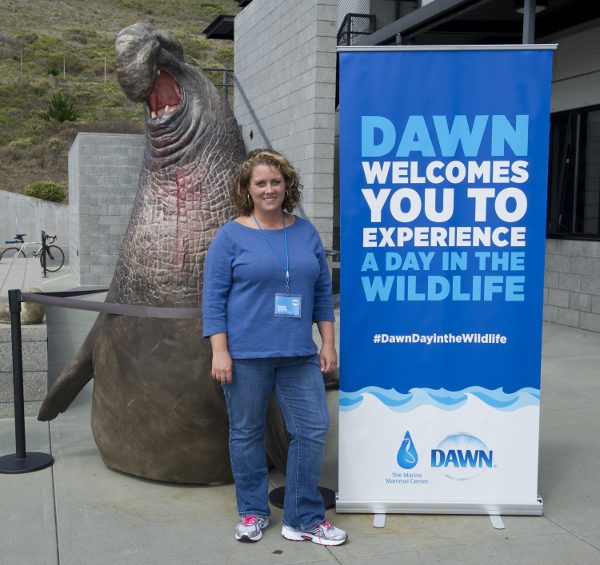 About six weeks ago, I got an email from Dawn (the dish soap, not a woman named Dawn) asking me to serve as an ambassador for them this fall in their efforts to highlight the volunteers who work to save wildlife.

I don’t usually like to travel without the family, but this part of the email got me:

“In order to bring the Dawn wildlife story to life, you would be invited to our A Day in the Wildlife event at TMMC in Sausalito, Calif. on September 12 for a peek behind the scenes. You’ll see firsthand the vital role that these rescue volunteers play in the well-being of wildlife across the globe and the amazing work Dawn enables through its support. And of course you’ll get to meet some adorable and majestic wildlife ‘patients’!”

I couldn’t resist. I had visions of baby ducks taking baths in Dawn bubbles. I love baby ducks.

As I got ready to go, I was amazed that EVERY person to whom I mentioned my upcoming trip already knew about Dawn’s commitment to saving wildlife. (Including my children.) The images of oil-covered-birds being cleaned with Dawn have definitely made an impact.

So what did I do at The Marine Mammal Center?

The eleven bloggers were given an experience not available to the general public. Not only did we get the educational tour, but we each had the opportunity to shadow one of the more than 1100 volunteers as they worked.

And these volunteers rock. Most commit to work at least one 12 hour shift each week, and go through intensive training before they can even start.

Without the volunteers, the center simply couldn’t do what it does.

What is The Marine Mammal Center?

The Marine Mammal Center is basically a hospital for seals, sea lions and elephant seals. Their entire purpose is to bring injured (or abandoned baby) marine mammals to the point where they can be released into the wild.

I think I knew that, but was amazed to how it all works.

Volunteers suit up in rubber boots and gloves to sort fish, tube-feed animals, scrub down enclosures, and generally get down and dirty to do whatever needs to be done to help the animals.

I got to experience a tiny bit of that during my day. 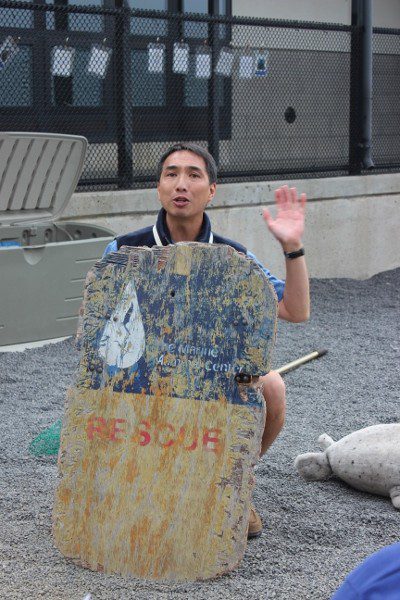 We started our day with the same tour offered to the public. We learned about the LONG and difficult process of getting animals to the center. When the center receives a report of an injured animal, volunteers are called upon to watch the animal and assess its needs. Then, a team (sometimes of more than ten volunteers) works together to capture the animal. These missions are full of surprises and risk. Even though the volunteers are helping the animals, the animals believe they’re in danger so they don’t make it easy! (And those elephant seals are HUGE!!) 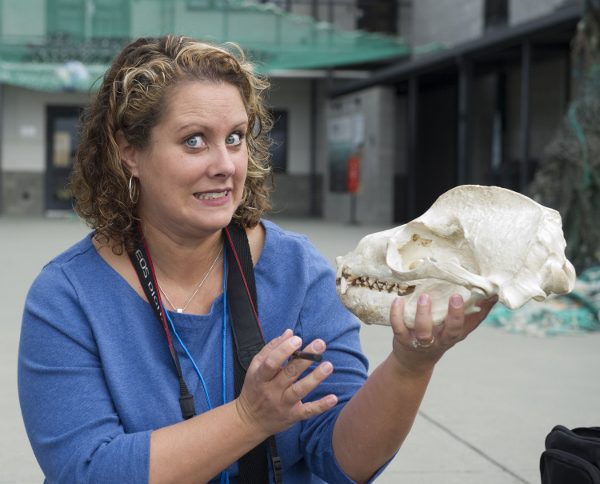 Sea lions have teeth! This is one of the reasons volunteers ALWAYS carry their boards for protection when they’re in the presence of an animal, even when cleaning out cages. 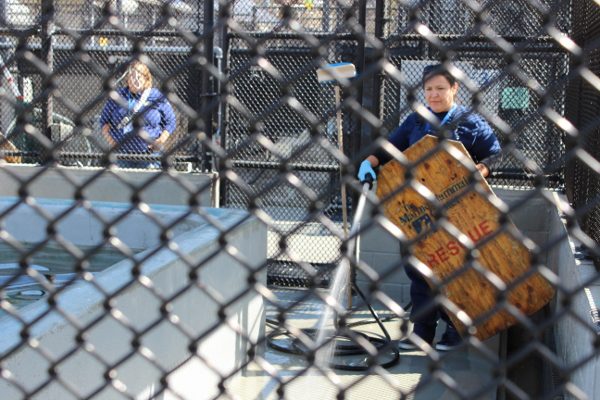 After the tour, it was time to go behind the scenes. I suited up in rubber boots and gloves and headed into the Fish Kitchen. 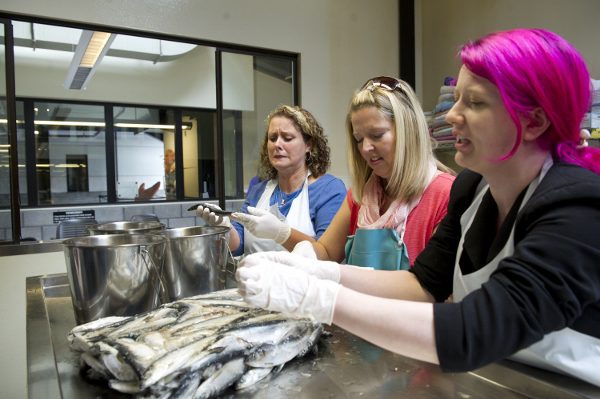 We helped sort almost-thawed Herring in the Fish Kitchen. Volunteers remove any fish with missing eyes or damaged skin. The animals are already sick and they can’t risk feeding them anything that could carry infection. In busy times of the year, volunteers sort more than 1,000 pounds of fish each day! Depending on how many “patients” need to be fed (sometimes more than 200!), some volunteers may work all day (or all night) in the Fish Kitchen.

I also helped clean the kitchen with . . . Dawn! (Surprised?) The center uses Dawn for so many cleaning tasks. While the marine animals don’t get cleaned with Dawn (like the oil-covered birds do), it’s used everywhere throughout the center as an effective cleaner that’s safe for the animals. 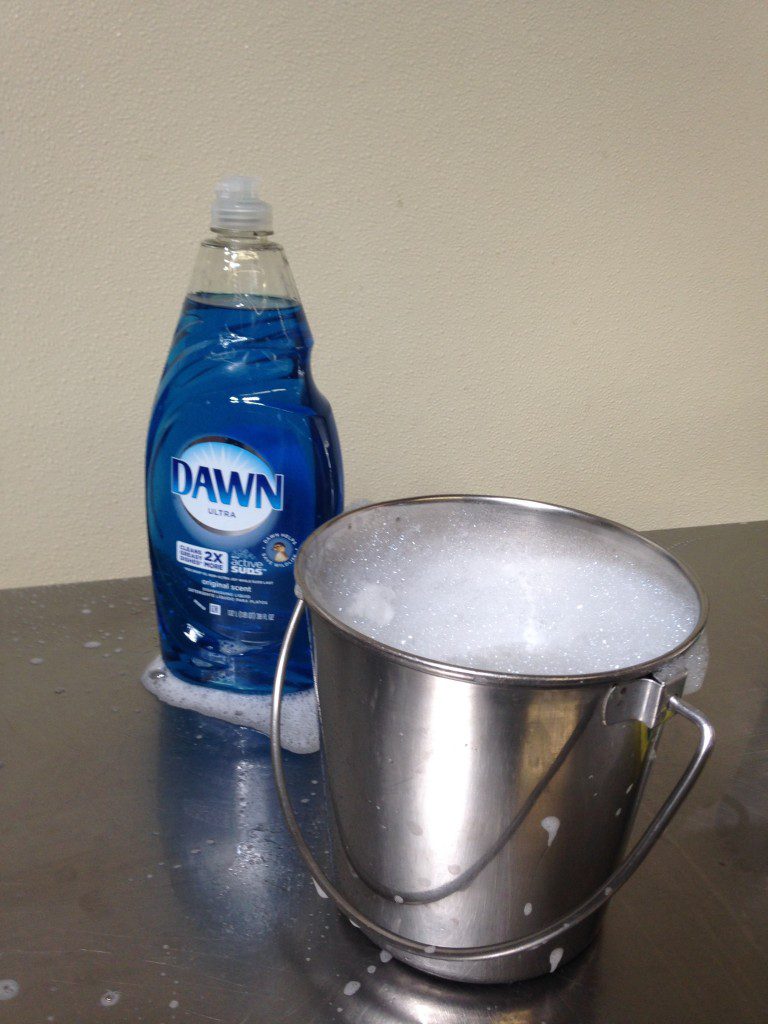 We scrubbed down tables and walls and equipment. Did you know fish scales get EVERYwhere? And they’re so hard to see! 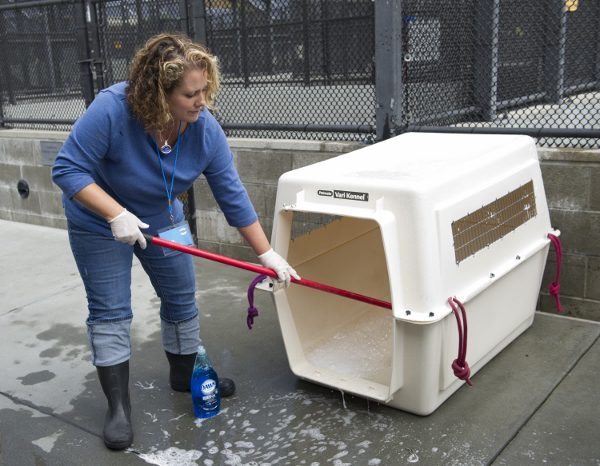 We also washed the crates and the center’s trucks with Dawn. As a working hospital, cleanliness is essential.

Finally, I got to meet my volunteer partner for the day. 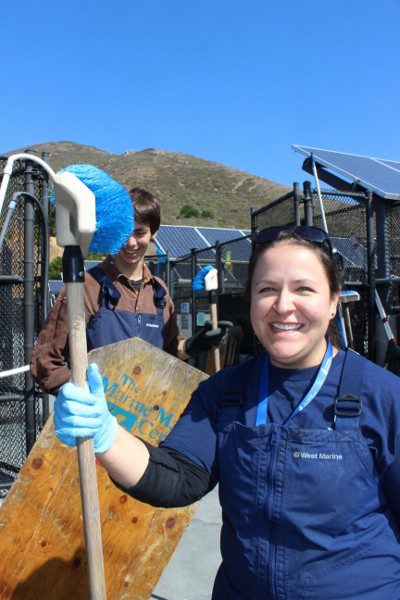 Korie volunteers for a twelve hour shift every Friday, and since starting at TMMC, she has decided to become a veterinarian! Her work at the center gives her amazing experience with animals.

I didn’t get to go inside this cage while she and another volunteer worked since there were two sea lions in it. 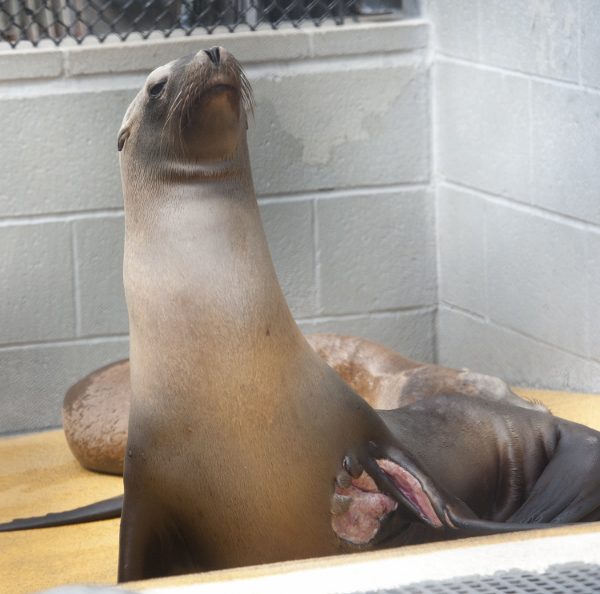 This one was being treated for a shark bite. (They said that the wound was looking much better!) 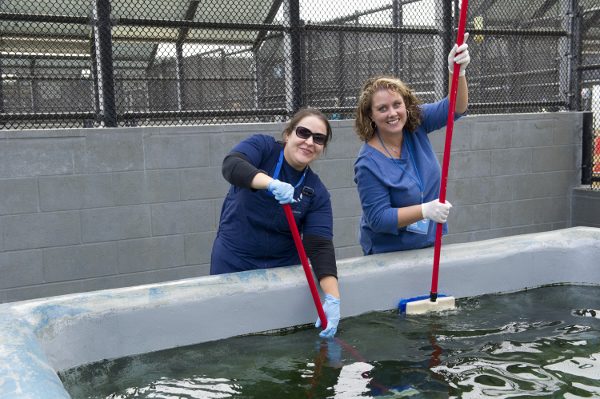 I did get to help clean the pool in an empty enclosure, though, and loved spending time with Korie. It was fun to see how much she loves doing what she does! I’ll share a video interview with her in a future post! 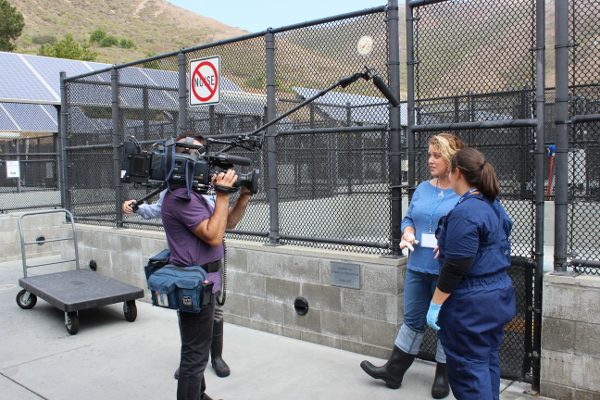 And then the very best part of the day came. We were able to attend the release of three sea lions back into the wild!

We witnessed, firsthand, the reason The Marine Mammal Center exists.

We drove two hours to an unpopulated area where the animals’ chances of success in the wild were higher. 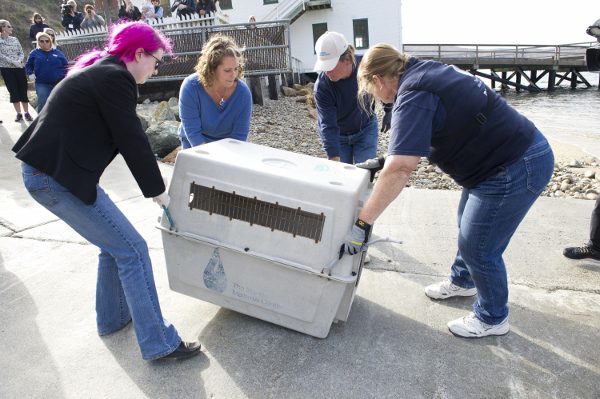 I got to help lift one of the crates out of the truck. In silence. The focus is completely on the well-being of the animal, so we were instructed to resist speaking encouraging words to them (like my mama-mouth tends to do without thinking) because they don’t need any distractions. 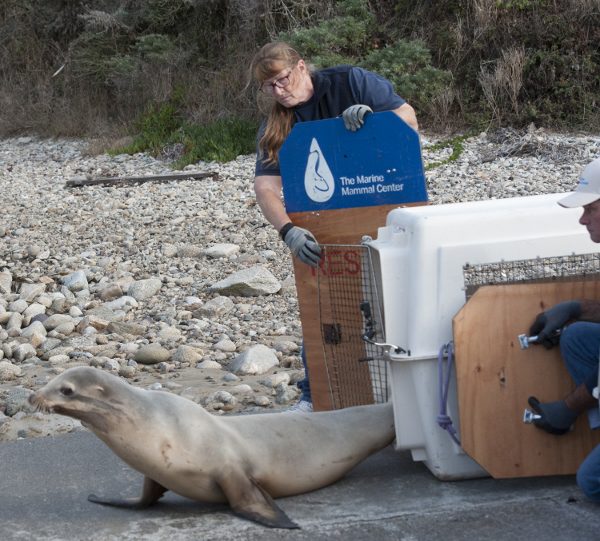 The center would never keep an animal longer than necessary or release it before it was ready, so it was truly perfect timing that we were able to be there. “Apostrophe” and “Row” (two yearlings), and “Fritters” (a young adult) were all so obviously thrilled to get back into the ocean! 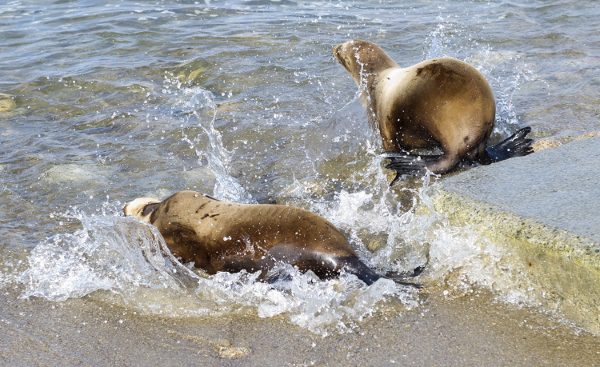 I loved my experience at Dawn’s Day in the Wildlife event. The passion and commitment of the volunteers was inspiring and I was in awe to see the hard work that is done to save wildlife.

I’ll share more of what I learned in future posts! 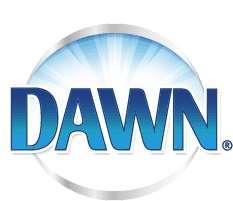 Disclosure: I am a paid ambassador for this campaign, but the experiences, the opinions, and the awe are all mine.

Most photos in this post were taken by Susan Goldman Photography.

Read Newer Post The Laundry Day Club
Read Older Post 036 What Can You Do in 5 Minutes? Podcast