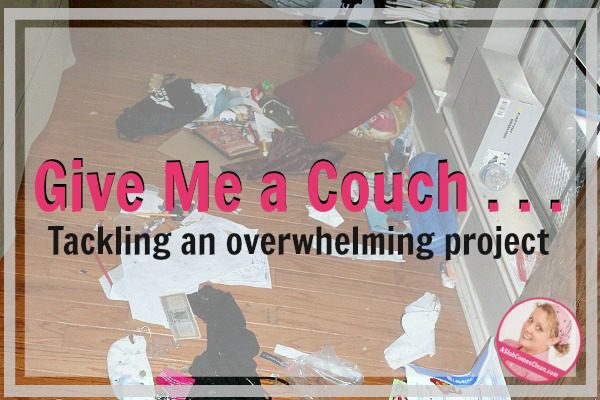 (And yes, I had to google how to spell déjà vu and then copy/paste it to get the marks correct.)

Remember a while back when I revealed the scary underbelly of my living room couch? And then remember when I had to let washing machine delivery men into the house just hours after I returned from a trip?

I even walked from the front door to the laundry room, trying to be super-observant and catch anything they might see while making the delivery.

They arrived. They walked (without tripping over anything thankyouverymuch) to the laundry room, and then they asked, “Where would you like us to move the old washer and dryer?”

Oh. I’d forgotten about that. My garage was a mess, but it’s a garage, so I feel even a normal person could justify that on a random Tuesday.

I led the way to the garage, and one of them remarked, “We’ll have to move this couch out of the way.”

I shy-laughed and told them to give me a minute to see what was under the couch.

I totally acted like it was no big deal.

As soon as their backs were turned, I grabbed a trash bag and bee-lined to the gameroom to start through the process that prevents me from being overwhelmed when I see something like this: 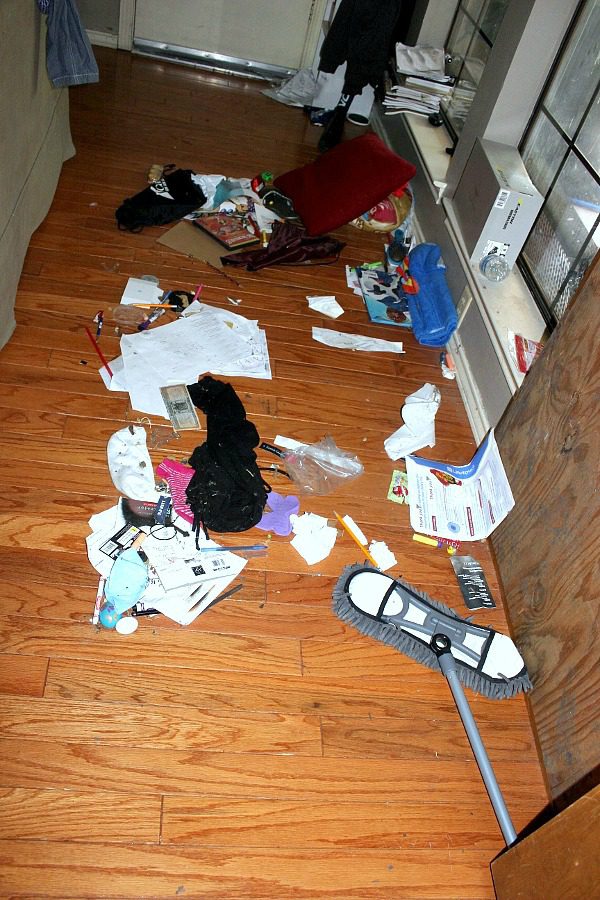 Note: I’m talking about keeping myself from being overwhelmed. I still feel overwhelmed, but the actual definition of overwhelm (thanks to google) is “defeat completely.”

I am not defeated. I may feel that way when I first see (or notice) an overwhelming mess, but am not actually overwhelmed unless I let it defeat me.

I didn’t have time to hem or haw. I needed to work through that mess fast.

Pre-blog, I would have scooped everything into a box to stick in the garage and forget about for a few years. That would have seemed like the only option since I was in a hurry. Feeling overwhelmed added to being in a hurry makes solutions like that (which aren’t really solutions, just justifiable procrastination) make sense.

But now I know that my steps work, and that I can get through them almost as quickly as I can scoop, and that I’ll never ever again have to deal with this stuff if I go ahead and go through the steps now.

Trash. Deal with the easiest of the easy stuff. Honestly, when there is a big pile of stuff I haven’t seen in who-knows-how-long, I’m much more willing to call things trash that I might otherwise consider treasure. 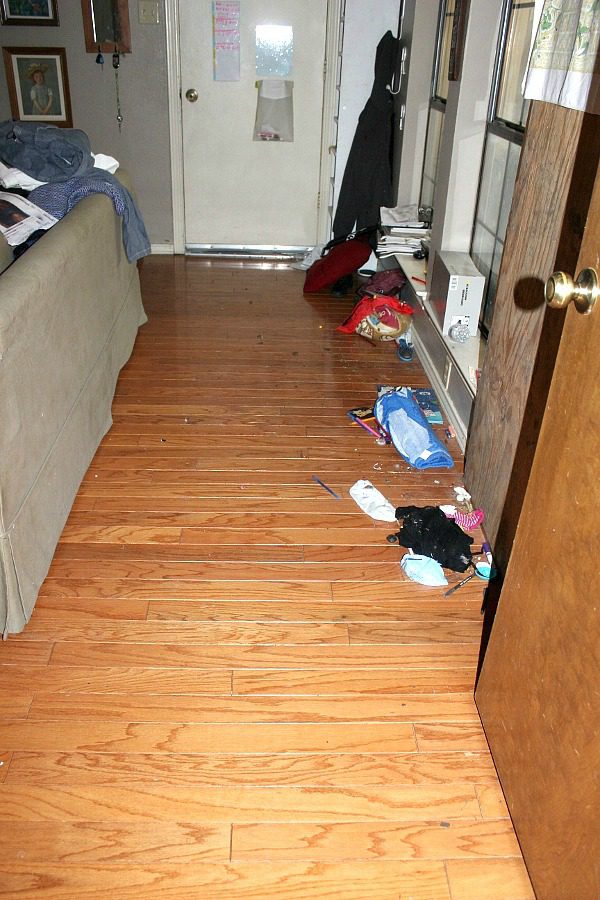 Repeat steps one and two on anything I’ve missed, and stick everything else in the Donate Box. 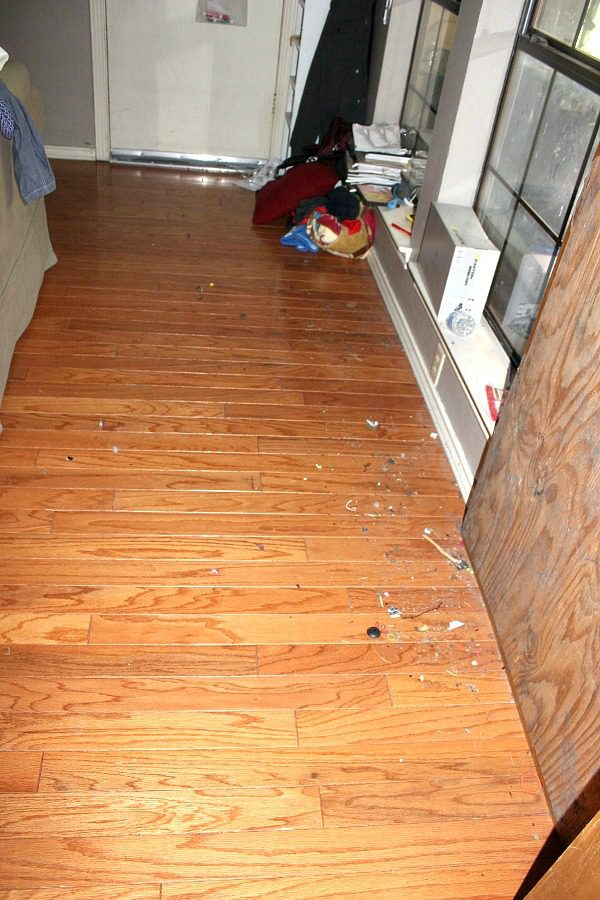 Yay for motivation! Boo for not being able to predict every scenario ever.

Wondering about the stuff in the photo that didn’t bother me (but probably should have)? That’s my Return Spot. A place where we put things that need to go back to people. And now that I look, I see a couch cushion there, too. And a (probably empty) shoebox on the window sill. And some other stuff. Honestly, I’m pretty sure that stuff was invisible to me (until the moment I saw it in this photo) since the opened door would shove it out of the way while the delivery men moved the appliances to the garage.

Oh. And the jacket hanging off the back of the couch.

And the tap floor. (Which has a totally logical explanation here.)

Whatever. This isn’t a post about how to be perfect. It’s how to not be defeated. And honestly, a big part of not being defeated (for people like me) is not worrying about being perfect. 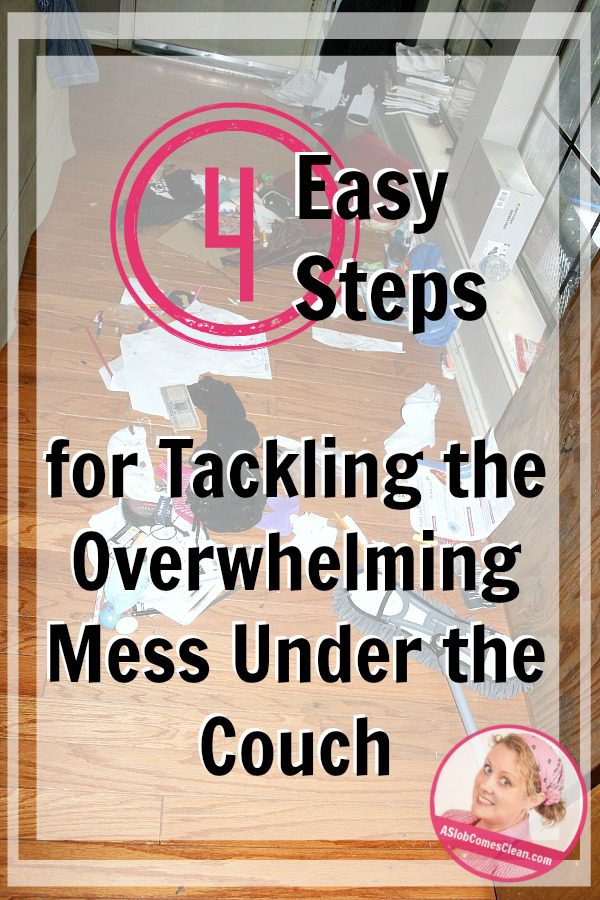