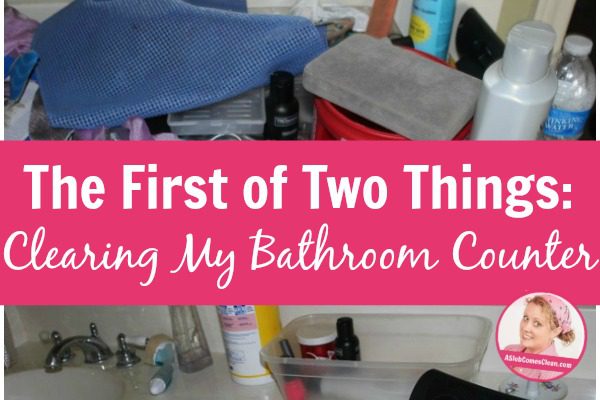 I’m rather behind posting some decluttering “projects” I’ve done over the past month. The weather has been beautiful, and we’ve had lots of randomness going on each Saturday. But a few weeks ago, I decided to do Two Things.

I knew I couldn’t get EVERYthing done that I should/desperately-needed-to do, but I could do two things. 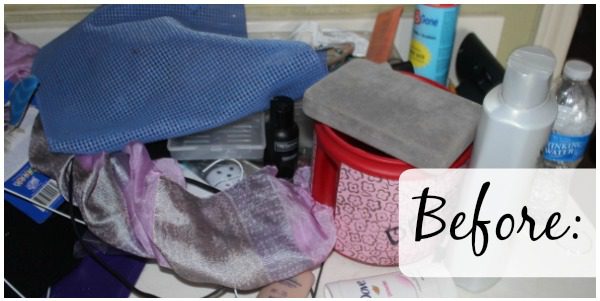 Choosing two small areas to tackle gave me the mental freedom to start without worrying about all I could be doing.

I followed my own Visibility Rule and started in my Master Bathroom.

(Not that the Master Bathroom is visible to anyone but our immediate family.)

That was my goal. Declutter the counter. The counter that had been piled upon for who-knows-how-long.

Perhaps the pile started when I multi-tasked and threw on some make-up as I counted change from the Daisy Dues bucket before I ran to the store to get a snack for our Brownie meeting. (Brownies. Which means we haven’t changed the bucket label since we were Daisies.)

Since I needed a Donate-able Donate Box, I chose to make one out of the box full of Kleenex that I had been tripping over for more than a week. 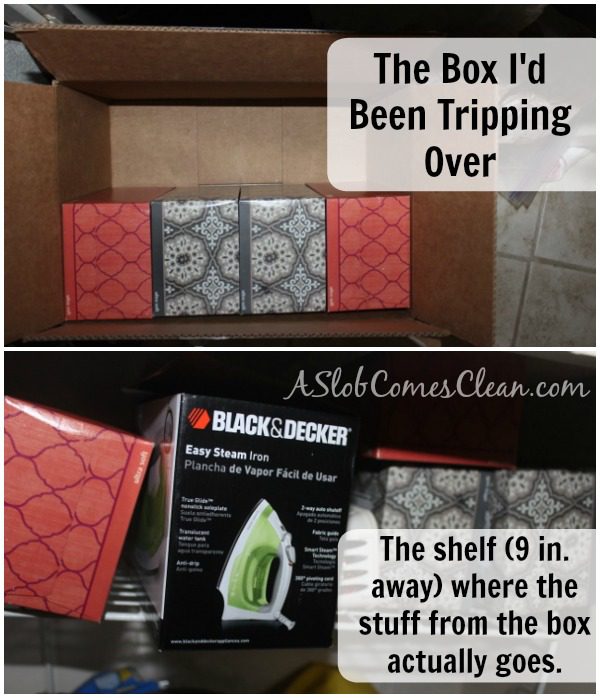 I purged the trash first: 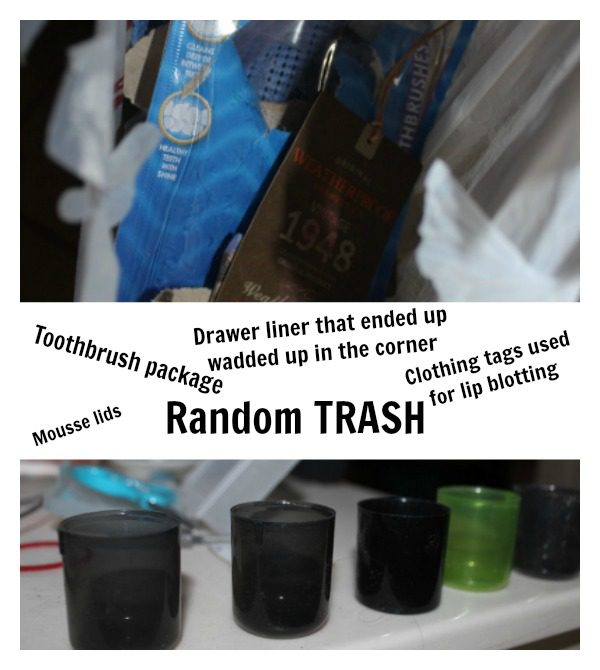 Right. Clothing tags I’d used as lipstick blotters, packaging that should have been thrown away in the trashcan 2.5 feet from the counter, and that sticky-but-not-stuck-down drawer liner that just wads up in the corner of drawers.

And lids from mousse. I could say I have a lot of hair (which I do), but there’s really no excuse.

Next, I tossed the Obvious Donations into the Donate Box. 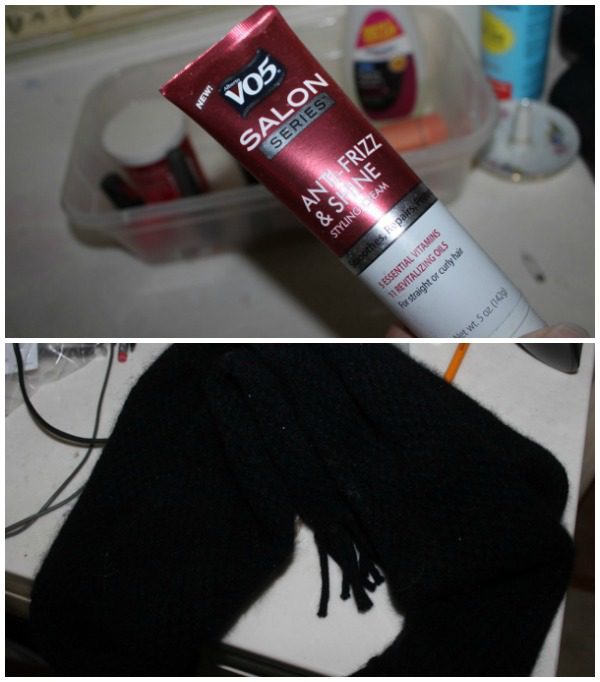 Hair product that hadn’t been opened in the time it took to go through five cans of mousse? Obvious.

A scarf that always felt a little odd so I never wore it? OBVIOUS once I noticed on the tag that it was made out of RABBIT HAIR!!!! For real. How do they even get the rabbit hair? Do they shave them? Or sweep up their cages???

And once the obvious donations were out of the way, it was time to take things where they go (right now!). 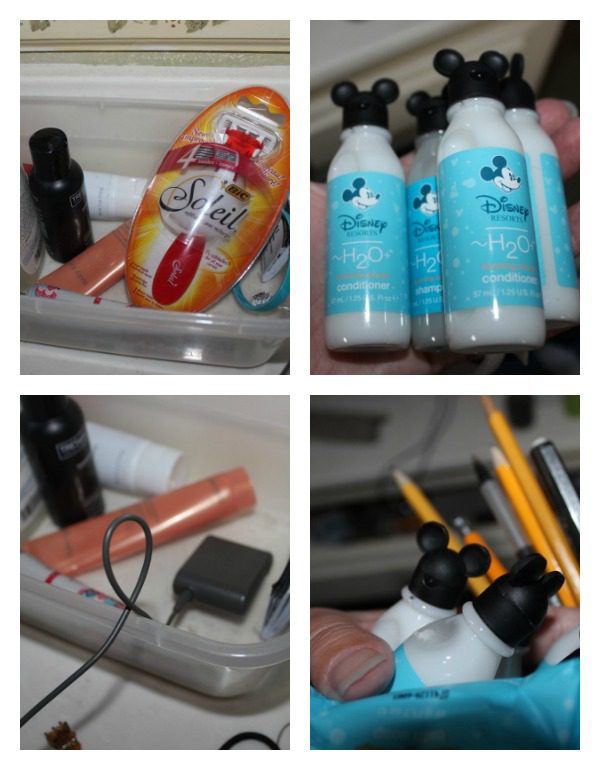 The razor went to the cabinet a few feet away where I would look for a razor . . .

We never, ever search for them in my bathroom drawer.

And yet, every time I clean out my bathroom drawer, we find oh-so-many. 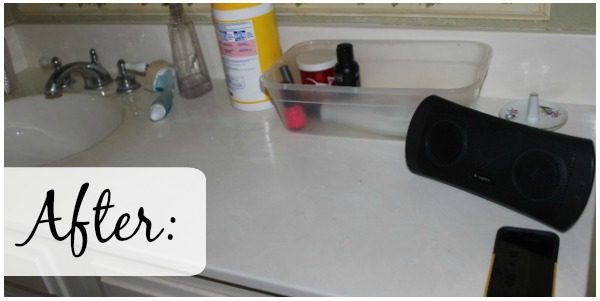 Much better. Don’t you think? 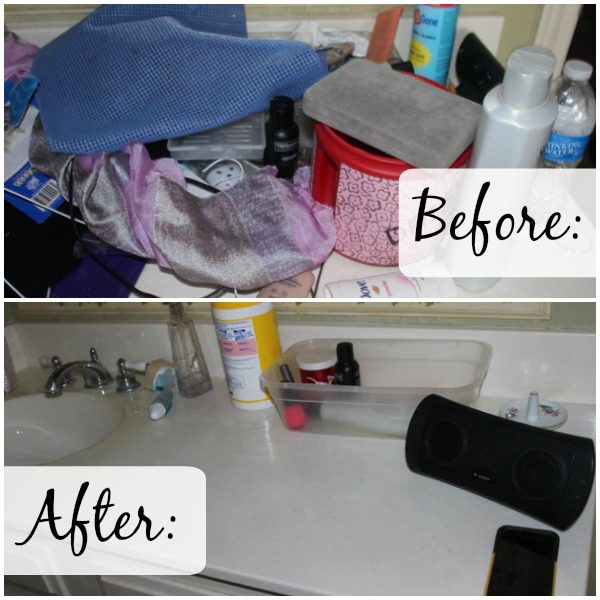 That it only took 20 minutes to clear it and I’ve been thoroughly enjoying my mostly-still-clear bathroom counter for almost a month? Yay!

I’ll share the second of my Two Things later this week.

(And seriously, I’d love to know the deal with the rabbit hair. It’s not “fur” but woven hair. As someone who is allergic to almost everything, it kind of gives me the heebie-jeebies.) 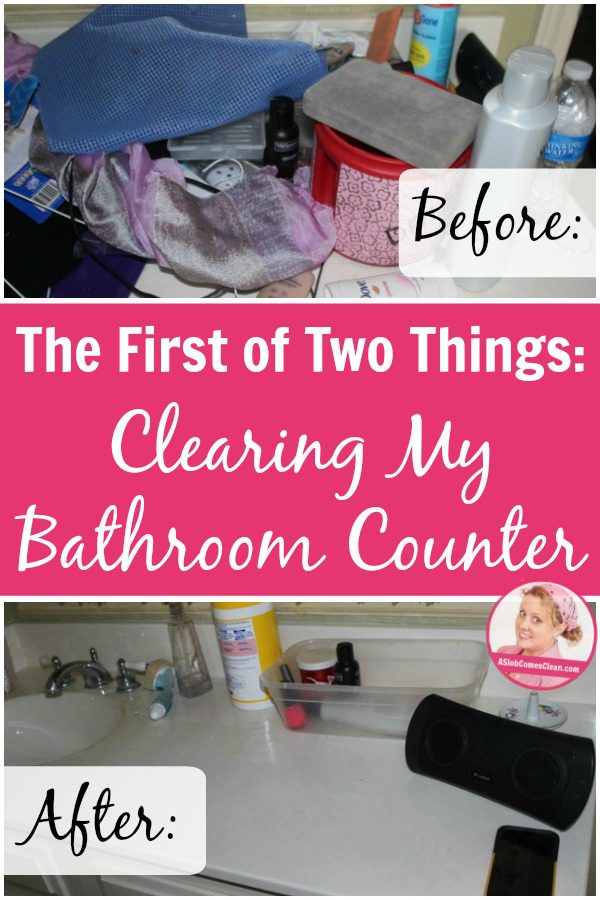