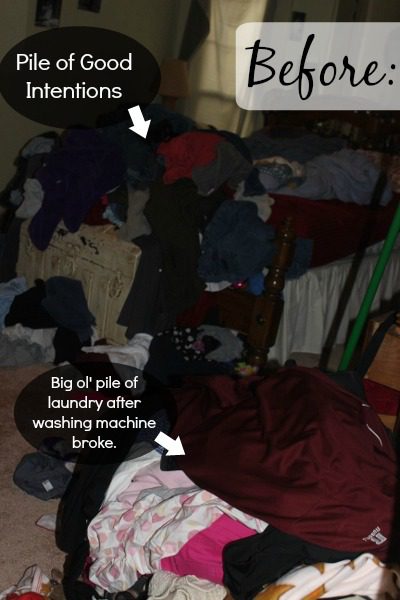 I mentioned last week that my washing machine died. It died a watery death.

A watery death that ruined the wood floor outside the laundry room.

Which meant I had to call our insurance company.

Which meant I had to let someone inside my house.

Which meant I feared she would need to open the door to the master bedroom which is just to the side of the now-warped area.

Which gave me heart palpitations.

Welcome to one of those posts that separates the true slobs from the people who complain about a messy house but would never in a million years let any room (especially the master bedroom) get like the picture above.

To those who hang around assuming I’d only write a slob blog because I’d already solved all my slob problems: See ya! It’s been real.

Here’s the thing. I KNOW I can do amazing things in even the craziest of rooms in less time than I’d ever have imagined pre-blog. I just have to do it. To start. Finding out someone with master-bedroom-door-opening powers will ring the doorbell the next morning at 10 a.m. gets me started.

My goal: Make it Less Embarrassing

That’s how I roll. I feel the average non-slob can have an imperfect bedroom when surprised with a reason to let people see it. I’m even good with being deemed a Really Messy Person. I just want to avoid the gasps. And the shudders. And the dropping of the jaws.

In real life. Online, I’ll show the world. (Wow. I have serious issues.)

Anyway, not having perfection as my goal was helpful. (As always. Duh.)

I started with the Easy Stuff. That’s the best way to stop the in-the-doorway-glazed-over-eyes feeling of overwhelm that I experience at the beginning of any daunting decluttering project. 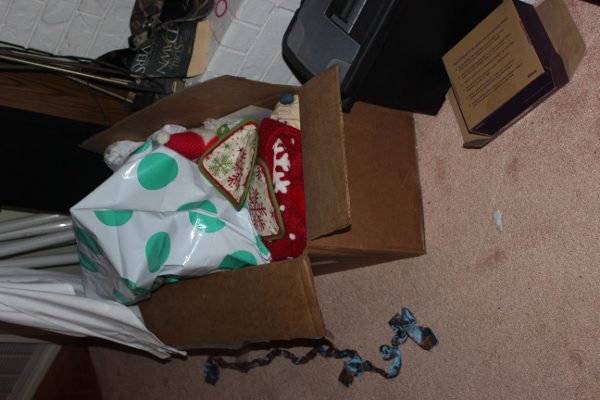 Easy thing #1: Move the final box of Christmas decor out of the room. (I totally almost wrote: “to the garage so it can be taken to the attic by Hubby” but looked up from my computer and saw the box, complete with partially filled ThreadUp bag, tucked “neatly” in the gameroom.) 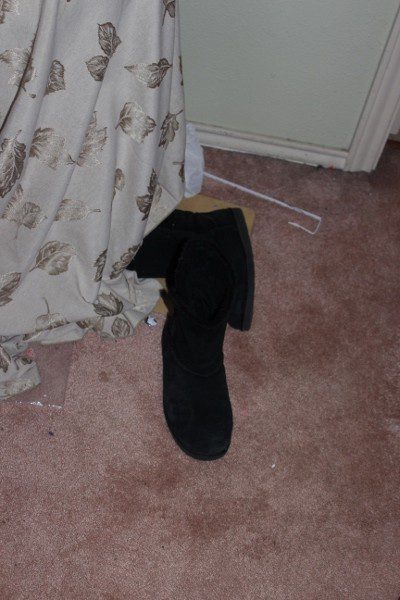 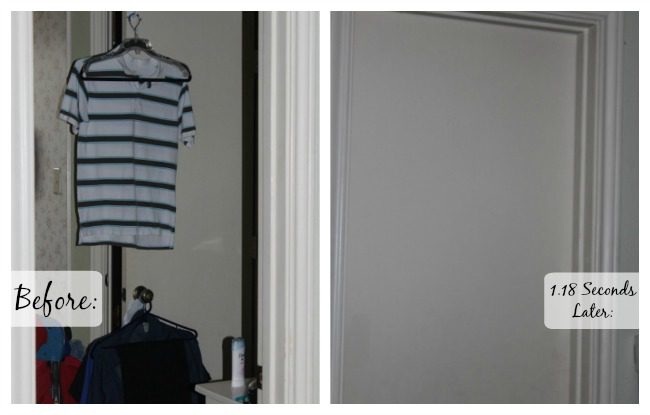 I’m sure there could have been a reason for her to cross the bedroom and go into the bathroom, but I had to take that risk. (For time’s sake.) 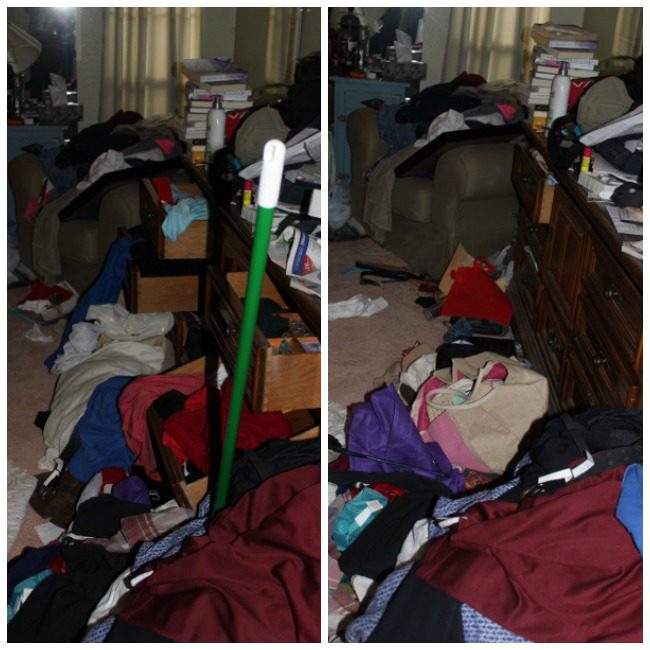 Not much of a difference, but a difference. And really, it doesn’t get easier or more decision-free than that, people.

Once I’d plowed through the easy stuff, I decided to repeat to myself (over and over, again and again) the phrase once casually uttered by a Normal Person I knew: If your floors are clean, people think your house is clean.”

Since “what people think” was all that mattered, I went with it.

I concentrated on clearing the floor at the end of the bed first. And next, the floor in front of the dresser. 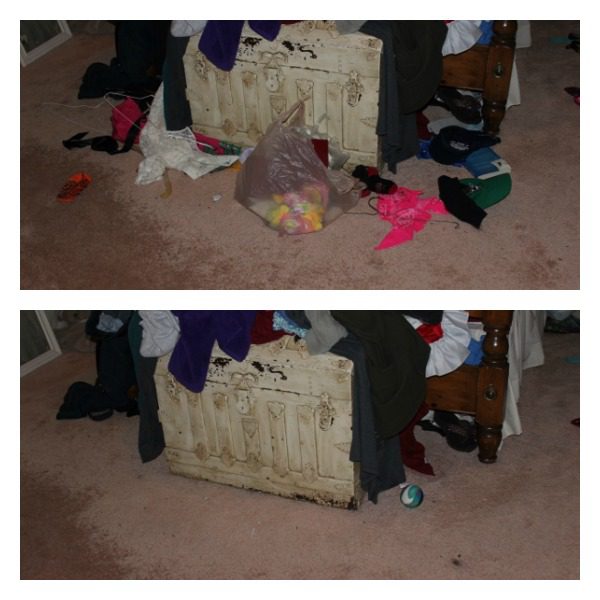 I needed a way to stay focused and not just run around in circles waving single socks and long lost belts and crying about how I’d never ever be able to finish. 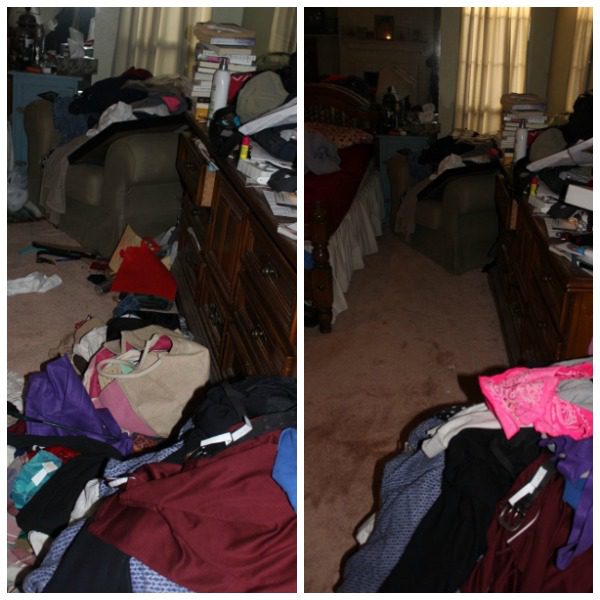 Once the floor areas were clear (remove trash first, then put away, then “declutter”), I tackled the Pile O’ Good Intentions at the end of the bed. While it was overwhelmingly humongous, it turned out that a LOT of it (the top 2.5 feet or so) was made up of a load of laundry that somehow missed out on the Laundry Management Method that rocks my world. I’m sure there was a really great and logical reason why that didn’t happen.

That, and a batman mask. 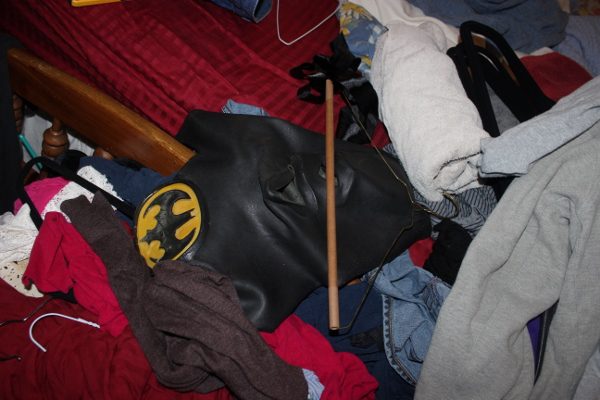 Once the pile at the end of the bed was gone, I decided to . . . make it. Ummmm, yeah. I’m pretty sure the state of the bedroom and me ignoring the most basic daily habit of MAKING THE BED are somehow related. Somehow.

And so, after twoish hours, the bedroom looked slightly better: 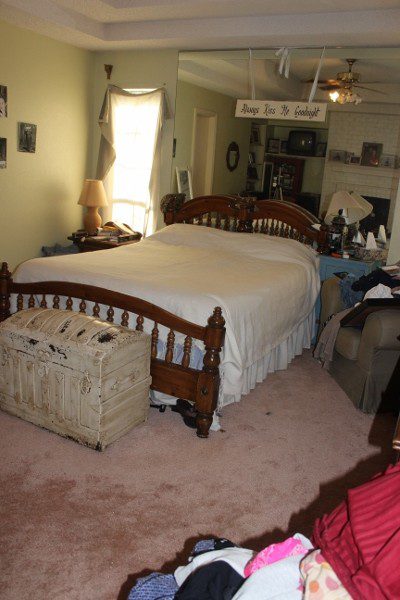 Not perfect, but much less embarrassing. Yes, I still had to practice feigning some WHAT?-you-need-to-open-my-bedroom-door-but-but-but-there’s-a-huge-pile-of-laundry-just-inside-the-door-y’know-cuz-my-washing-machine-broke embarrassment, but I was actually pretty proud of myself.

And yes. I do see that brown flip flop in the picture. I’d have looked for it all next summer.