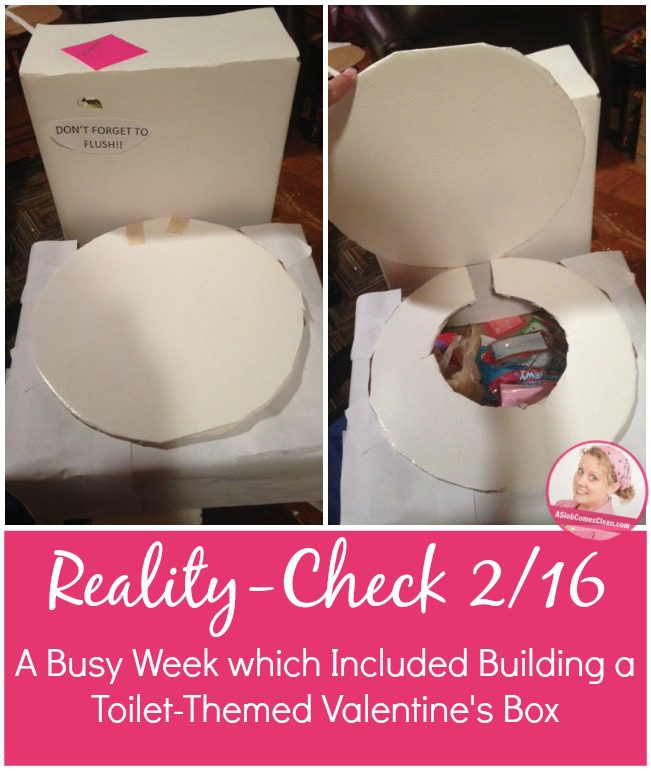 I’ll start with a possible excuse for not actually posting this on the 16th. The kids will be out of school, so unless it’s ready to go and they sleep late (pretty pretty please?), it may not happen.

I got posts scheduled out for the week, which always takes a load off my Blogging Shoulders. Laundry was sorted by the kids before they left for school. When 3:00 hit, it was craziness from then to 8 p.m. Kids being farmed out so they could still go their own basketball practices while we drove to another city for the oldest’s last game, that last game going into overtime, meals at various places for various people at various times, etc.

I didn’t run the dishwasher. With only one person eating at home, there just weren’t enough dirty dishes to fill it.

I filled the dishwasher and ran it. Last night, I was wrong about not having enough dirty dishes to fill it. Just like I’m wrong every single time I let myself make that decision.

By 11 a.m., the last load of laundry (which was sheets, which every slob knows is a totally negotiable load . . . ) from yesterday’s Laundry Day was in the washer. After not starting on Sunday night and leaving the house at 3 p.m., I think that’s pretty good. Especially since I actually did that laundry management method that rocks my world and means laundry is actually done. I’m talking about folding straight out of the dryer and putting away immediately. Seriously, doing it that way is like magic. (But not magic at all.)

Morning was a little crazy being on the phone working on details for helping my in-laws purchase a used car that my MIL will be able to get in and out of more easily.

Trying to get NEXT week’s posts written and scheduled so I can really tackle some bigger projects.

I’m so off my rhythm on dishwashing. But I’m doing it. Even though it’s generally the morning when I run it and then the evening when I empty it and that just doesn’t work as well.

BUT I’M DOING IT.

That blankety-blank Alamo project is finally out of my house. Yay for that. I’m determined to block all of the musical I’m currently working on with 10-12 year olds today.

Ummmm, it’s Monday morning. I didn’t write anything after Wednesday because life was pretty much a blur. Let’s see what I can remember in these few moments before kids start stirring.

I did block all of the musical on Wednesday. This was big for me. While that’s exactly how I like doing things, the last few years I’ve been flying by the seat of my pants and blocking scenes in the hour before rehearsal. I’m sure I’ll write more about that in the future. I’m working on re-prioritizing right now.

I have no memory of what happened in the kitchen on Wednesday night.

Thursday, I rushed out of the house to drive the hour to meet my 87 year old father-in-law at the bank to help him get out the money to buy a new-to-them car. With the hopes that my MIL will soon be able to go back home, they truly did need a vehicle that was easier for her to get in and out of. I just made it back into town in time to direct a rehearsal. I did make dinner, but was so exhausted that I have a vague memory of justifying leaving the kitchen for “later.” Oh, and we made a toilet Valentine’s box for Kid #2. (Get it? #2?)

Friday was filled with counting money for a school fundraiser, taking my daughter to the dentist, discussing a rather exciting speaking opportunity on my phone while standing outside the dentist’s office, Valentine’s parties and recording, uploading and publishing a podcast in the one hour I had at home.

Saturday, we cheered on the kids at their basketball games and then Hubby and I went out ON Valentine’s Day for the first time in a very long time. Probably since before we had kids. Don’t worry. We ate before 5, so we missed (most of) the crowds.

Sunday, I paid for my lack of keeping up with the basics for the last half of the week. It only took about an hour to get things ready for our church home group (which is insanely amazing compared to pre-blog), but I was irritated with myself for needing to spend more time in the kitchen washing BIG stuff that I’d put off.

Oh. And that hour didn’t include dusting or vacuuming. Because I didn’t bother. Everyone coming knew (from last week) that my vacuum cleaner is still in the shop. (Grrr.) I also didn’t bother changing out of my pajama pants. Really. Yay for friends who accept me for my dusty house and lack of proper attire.

Now it’s Monday morning. I’ve worked out. (Totally skipped Friday.) Even though the kids are home today, it will still be Laundry Day (and they’ll “get to” help) because Laundry Day keeps us clothed.

I’ll let you know next week how that all works out.

Oh. And if you’re not on Facebook, see what had me giggling all last Monday. The comments on this post are hilarious. I was trying to be funny and lots of you totally got it. I felt a little bad about those who thought I was serious. Bad, but not bad enough to not keep checking the comments over and over and laughing at the thought of people thinking the video was actually Hubby and me.

One last thing: #2 did win “funniest” for his Valentine’s box. And it really did “flush.” He borrowed his sister’s dollhouse toilet that makes a flushing sound.

Read Newer Post A Clean Kitchen in One Minute and 3.58 Seconds
Read Older Post What to Do with Old Prom Dresses