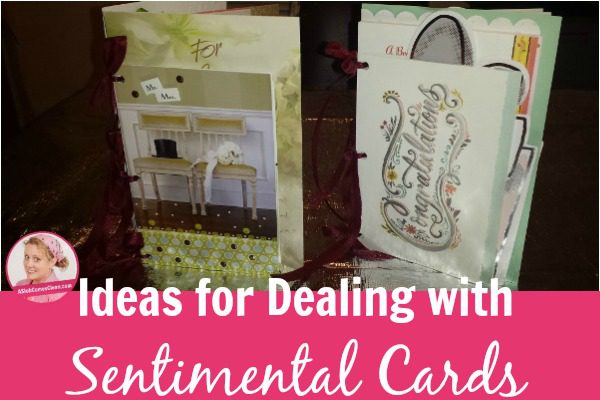 Sentimental clutter is stressful. Stacks of sentimental pieces of paper with no practical use can send a sentimental slob right over the edge.

Personally, I’ve pretty much gotten over that.

I tend (which means it’s not a plan, just something that happens) to display the current year’s Christmas cards for the month of December and then shove them in a box of Christmas decorations when we reclaim the house after the holiday season. The next year (when I assumed I’d finally be ready to deal with this issue), I pull them out and groan. Do I keep them? Where? Or do I really stick somebody’s carefully posed family Christmas picture in the recycling?

I honestly don’t remember what I did with last year’s cards this year. I know there have been years when I pitched them and years when they were placed in a big envelope and hidden (like an unintentional time-capsule) in some random, logical-but-n0t-memorable spot.

Anyway, in my recent post about things I don’t keep, there was great discussion in the comments about greeting cards. A few ideas stuck out as extra-helpful and I decided to put them in their own post! Ti even sent me pictures to use!

I notice a lot of people have said cards were a problem for them. Just in case it helps: for my wedding and bridal shower I knew I wanted to keep my cards but I wouldn’t look at them in a box. So I punched holes in the spines of all of them and tied them into a “book” with ribbon. Its so much easier to enjoy them and I can keep them upright on my shelf where they take up almost no space

definitely a worth while project if cards are one of those sentimental things you want to keep.

Her examples are in the picture at the top of the post. She also sent some details:

I just used a normal single hole punch. For each book, I picked a card that was a pretty average size and punched three even holes. I used that one as a template for the rest to make sure the holes were even. I lined them all up on the bottom edge to give it a sturdy base so I can keep it on my shelf. So cards that were too tall I just put the holes down farther rather than centered and for really short cards I only did one or two holes 🙂 I tied it slightly loose with ribbon so that it was easy to open the cards and Poof! You have a little book of all your well wishes.
–Ti McKinney

I love this idea for Christmas cards. We keep special Christmas books with our decorations that only come out once a year. Their scarcity makes them more fun to read. I can totally see using Ti’s method to create Christmas card books that would only come out at Christmas. (As long as there was a place to put them, and a box with room to store them.)
If you want them out of the house, and will actually get to the post office, here’s a great idea from Laura:

I’ve been purging lately and found the St. Jude’s charity that uses card fronts of all kinds for crafts with sick kids. This charity made it much easier for me to part with cards. Address:

Sharon shared the link to the guidelines for submissions. They take many different kinds of greeting cards, not just Christmas!

And for fun, here’s a link to an origami tutorial for making little boxes out of cards that Darlene shared.

As a chronic over-keeper, I’d have to limit myself to the boxes I could make in one session that would fit under a cute little Christmas tree I already had and that could be stored easily in an existing Christmas decor storage container. (I need lots of layers of “contain”ers to keep my Big Ideas under control!)

Now for the kicker. (The Slob Blogger in me just has to say it.) These are all great ideas if you actually use them. As someone whose home was once overstuffed with great and noble and creative and resourceful but UNFINISHED ideas, I also say it’s perfectly fine to just stick the cards in the recycling bin. OR, if you live in an area where recycling isn’t accessible . . . throw them in the trash. Or burn them in your New Year’s bonfire. Or whatever it takes to clear space in your home.

Ideas are awesome. Overwhelming clutter is not. 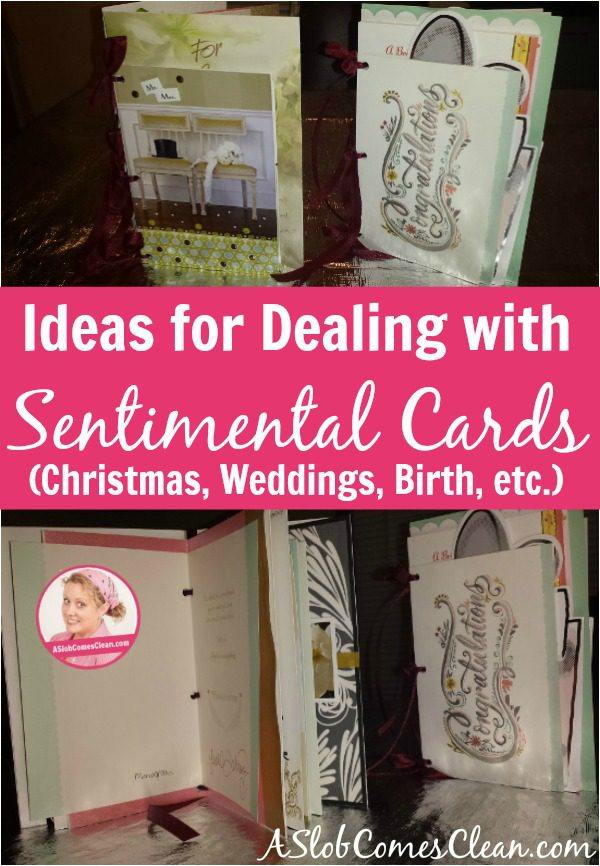 Read Newer Post From the Mailbox: “My Slobby Behaviour Isn’t Set In Stone”
Read Older Post Do You Know Where You Can Stuff All Your Great Ideas?