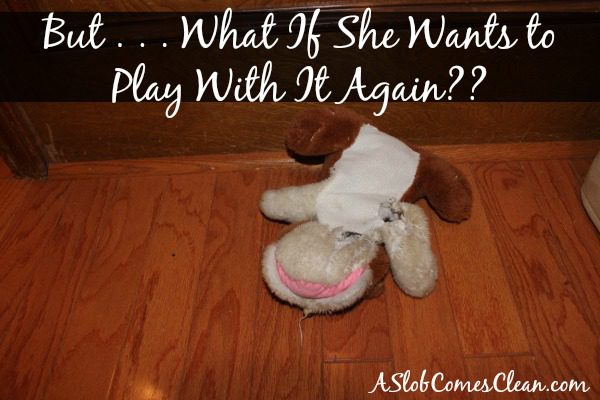 Last April, we got a new puppy. She’s almost perfect. (Other than the occasional tinkle in the house.)

She has claimed about four of my daughter’s (400) stuffed animals as her own.

We get such joy out of watching her play with her toys. She shakes them and throws them across the room to play fetch with herself.

She obsesses over one for a while and then moves on to another.

That bulldog up there was her first love. She loved the stuffin’ out of him. (Literally.)

But right now, she’s ignoring him. 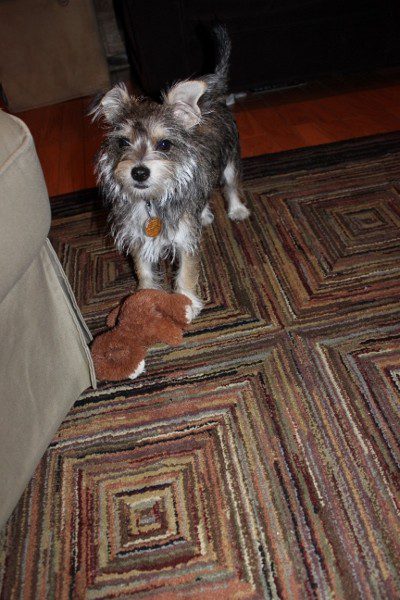 That’s her with her constant favorite. Her teddy bear. Every night, she grabs her teddy bear and runs to get in bed (with my daughter).

As I was picking up the living room the other day, I saw in what bad shape Mr. Bulldog really was.

Scruffy likes him, but she’s not obsessed with him. There was no way I was going to repair him.

And yet, I hesitated.

What if? What if one day she happened upon him again and got a few hours of joy from de-stuffing him?

But I made myself be realistic.

She has other toys. She’ll be fine. Even if she does “go looking for him” one day, she’ll get over it.

I know this because I have real human children who are forever “getting over” things that mom decluttered. Yes, they do remember and sometimes they’re sad for a while, but they’re used to it now. And I think them getting used to used-up things leaving our house will help them have a better perspective on stuff in the long run.

Another Note: I might have chosen the picture where the socks under the couch in the background don’t show up quite as well. 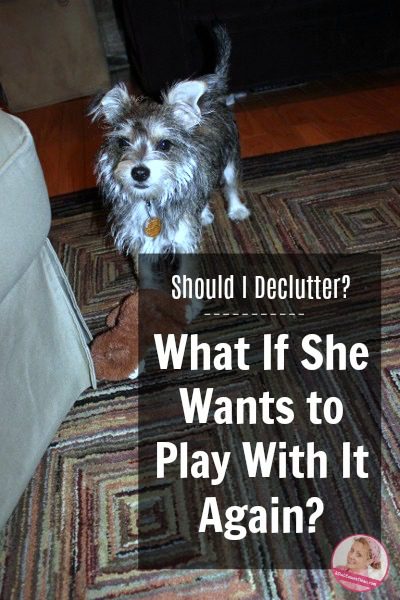