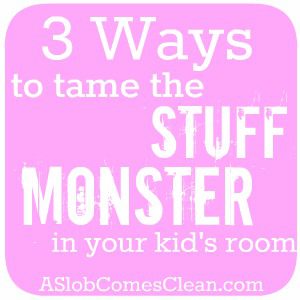 But as I promised in my post yesterday, I’m sharing some of the strategies I’ve developed to tame him.

Personification of inanimate objects is one of my Clutter Issues.  Attaching feelings and personality to things that have no feelings or personality . . .

Really, many of these tactics are the same ones I’ve used in decluttering the rest of my home.

Just like I removed the totally-cute-so-shouldn’t-it-be-useful bench out of my gameroom . . . I removed the everybody-else-seems-to-love-these-things-so-why-doesn’t-it-work-for-us toybox from my daughter’s room when we did the big re-organization in there last year.

Both . . . worked.  Meaning, once I accepted that the purpose of these objects was never going to be fulfilled in my home and that they only served as Clutter Collectors, I was able to completely remove them.

This freed up significant space, and the don’t-know-how-it-works-but-it-does positive side-effect was that once the convenient dumping ground was no longer there, the dumping stopped.

I don’t expect this to be an easy concept for kids to grasp, since I didn’t grasp it until I was in my later 30s.

It’s one of those things I have to clearly direct with my kids.

Here’s the basic concept.  I give my daughter a container for Barbies.  Whatever Barbies can be truly “contain”-ed in that “contain”-er we keep.  If we have more than she can fit into the container, she needs to start eliminating.

There’s something ever-so logically psychological about this.  It’s a freeing concept.

If you’ve read my garage organization posts or the post about my daughter’s room, you know I don’t begin the organization process by stocking up on pretty containers.  That’s a recipe for disaster around here.

And tip #3 for today: Sneak Attacks are sometimes a mom’s best friend.

Involving your kids in decluttering their rooms is often necessary and always traumatic.  Many life lessons can be passed down during these (totally un-fun) parenting moments.

But . . . there’s real beauty in doing some major purging while the kids are out of the house.

I always worry that they’ll suddenly remember their favorite toy that I just sent to the curb.

I’m always amazed at the shouts of joy when they see their significantly cleared-out rooms.  I marvel at the hours they spend happily playing in a place they wouldn’t have chosen to go just two days before.

Sneak attacks are stressful . . . but they work.

These are three ideas, and my brain is churning with more.  The fact is that there’s no cut and dry method that works every time for every situation.

I’ve tried many different methods, some more successful than others, and can say without a doubt that I’m glad I tried each and every one. Even the ones that didn’t work well got us a tiny bit closer to our goal of a livable home.

And the ones that helped us make huge strides weren’t always the ones I had confidence in before I started.

Just go for it. 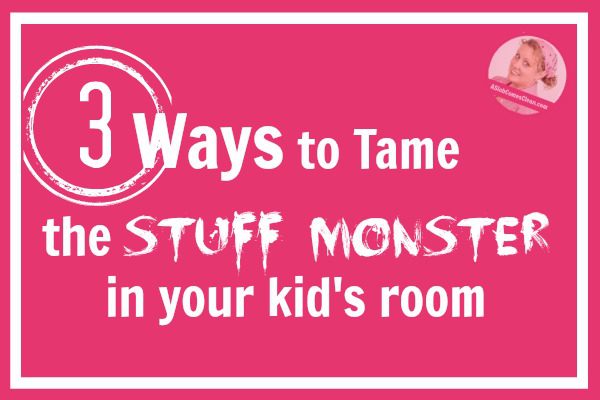