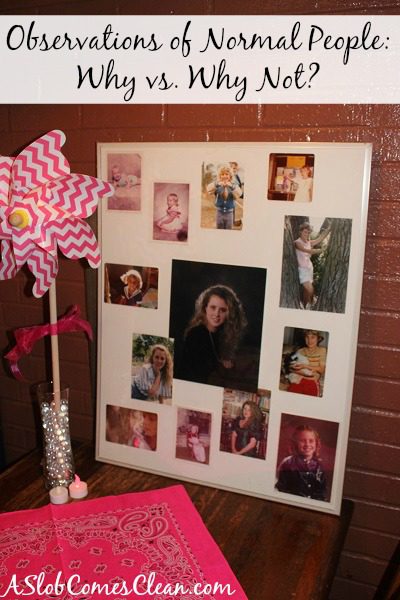 I have two normal sisters-in-law.

At least, normal in the sense of the definition I’ve created for this blog . . .

Last Friday night, my sweet husband threw a birthday party for me in our hometown so family and growing-up friends could attend. It was lovely. My mother decorated the tables, and chose exactly the kinds of things that make my heart sing.

As she was packing up after the party, she gave one of the giant-sized pinwheels to my daughter to take home. My daughter showed it to me and I rejoiced with her at the sheer adorableness.

And then my mother asked my sister-in-law if she thought my niece would want the other giant pinwheel. (The niece – a teenager – wasn’t in the room at the time). My sister-in-law said . . . “Why?”

Hmmmm. Her first reaction was “Why?”

She has a lovely home that I’ve never seen out of control. From what I can tell, there’s a place for everything.

As if . . . before she brings something into her home, she considers whether or not it is needed. What she will do with it.

And if there isn’t an answer (a good answer) to the question . . . she won’t even bring it in.

So much to consider there.

Y’know, for the girl whose initial answer is (almost always), “Why not?”

P.S. I must admit that I took the second giant pinwheel. And that my daughter and I have already planned to use them in some sort of choreographed routine for some sort of upcoming talent show.

I have issues, but I also have ideas.