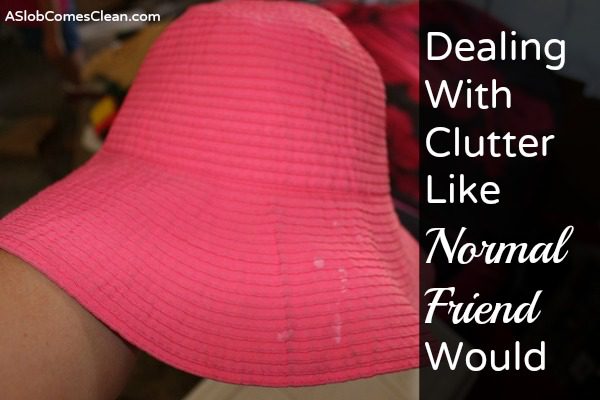 I haven’t mentioned Normal Friend in a while.

But I did channel her last Saturday.

I was decluttering a big pile of . . . ummm . . . stuff in the garage. There will be a post coming about that soon, but basically I was cleaning up scattered (and stacked and thrown) summer stuff on the first cool day we’ve had.

I came across a few single-summer-only items. Like this hat.

Summer before last, I started wearing big, embarrassing hats to the pool. I’ve always been a sunscreen-a-holic, but my face would still get very tan.

Since I’m pushing 40, I decided I was ready to sacrifice my summer vanity now for my year-round vanity later on.

Besides, aren’t moms supposed to wear things that embarrass their kids?

I’ve yet to find a hat that lasts more than one summer.

It gets wet. It droops and fades. I splatter sunscreen on it.

And I’m pretty sure no one would buy this nasty thing at a thrift store.

So I threw it away.

I remembered Normal Friend saying that if she doesn’t know what to do with something she just throws it away. She doesn’t worry about finding a spot. She doesn’t stress that maybe some poor, hatless person will be searching thrift stores, desperate for a hat.

Though I do feel a little bit bad.