I’ve been speaking more and more and am consistently amazed that the VAST majority of looks on the faces out in the audience are ones of understanding.

Being limited to a single hour of verbal blabbing instead of the endless opportunity to self-analyze here on the blog has helped me to really focus.  It has caused me to zero in on what has made this deslobification process successful.

Y’know, as opposed to the thousand-ba-jillion failed attempts to change my slobbish ways pre-blog. 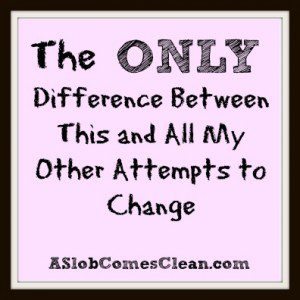 About a year ago, I saw a woman I hadn’t seen in a while.  I didn’t recognize her at first.  She had lost a SIGNIFICANT amount of weight.  A shocking amount.

As I raved about her success and asked what she had done, she said . . . “I just didn’t quit this time.”

How simple.  How profound.

This statement has been re-playing in my head lately as I’ve been working to make exercise a non-negotiable part of my life again.

I realized that it’s also true for me and my deslobification process.  Yes, I’ve come up with daily habits that make sense to my Slob Brain.  I’ve learned how to declutter and have purged this house like a maniac for the past three years.

But ultimately, the only difference has been that I didn’t quit.

Not when my master bedroom fell back into disarray for the 67th time.  Not when I get consumed with a project and wake up to a house that hasn’t seen a daily habit or weekly cleaning task in a month.

Not when I fail.  Again and again.

So the best advice I can give anyone at any point in their own deslobification journey?