At 5:17 yesterday, I wandered into the kitchen, suffering from the munchies and completely unaware of the time.

Hubby asked if I was making supper.

I looked at him like he was crazy.  I mean, it was nowhere near time to think about supper . . . right?

Except that 5:17 kind of is time to at least think about it.  I had no concept of time because we had a late drawn-out lunch after a morning of basketball games so I wasn’t terribly hungry.

Since I didn’t make a menu plan last week, I had no clue what to make for supper. 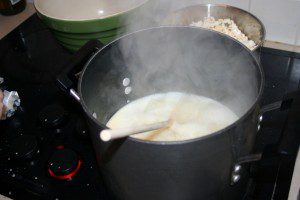 It was cold and rainy outside and Hubby mentioned how good soup sounded.  I wasn’t in the mood for anything spicy, and was completely out of milk (or anything that could substitute for milk) for any creamy soups.

So, I got creative.  Now just to clarify, this isn’t really a recipe post.  It’s just encouragement that kitchen experimentation is okay.

It’s not like my family was starving and it’s not like my made-up soup was poisonous.  And it’s good for them to learn that sometimes in life you just choke it down and purposefully be thankful that you have something to eat.

Y’know, since some people don’t.

I put six-to-eight . . . ish cups of water on to boil and added chicken bullion for six-cups-worth.  I dumped in three cups of potato-flakes (instant mashed potatoes).

Then, I got a little crazy.

I had done a quick Swagbucks search and found this Vegan recipe that used pureed chickpeas to thicken a soup.  I didn’t use the recipe, but I gave the chickpea idea a shot.

At the very end, I put in a handful of grated cheddar, stirred it in and let it melt. 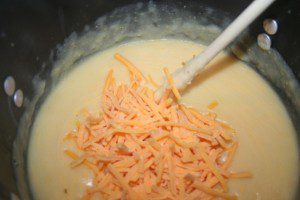 The verdict? Totally, completely . . . edible. Yep.  My family was fed with what we had on hand, and we didn’t run out for fast food.  I call that a success. And four out of five actually liked it!

While I’m encouraging creativity in the kitchen, I’ll go ahead and tell you that even though it makes total sense to use canned minestrone soup in place of tomato soup or marinara sauce in a casserole that’s going to have some veggies in it anyway . . . that total sense doesn’t really translate into edibility.

My husband still remembers the unsuccessful Minestrone Casserole Experiment from over a decade ago, and that’s probably why he was perfectly fine with this un-exciting but not-too-bad experiment.

This week . . . I’m makin’ a menu plan so I don’t have to experiment next Saturday night.

I’ll be linking this up to Menu Plan Monday.