Thank you to who?Comics for sponsoring this post and encouraging my child to read biographies in comic book form! Please click here to learn more about the app. And follow who? Comics on Twitter for updates!

As a former teacher, I love the feel of a book.

As a recovering slob, I’ve learned to accept that maybe it’s not a good thing to own more books than will fit on my shelves.

I don’t know that I’ll ever stop loving the feel of paper pages, but when given the opportunity to review who?Comics for the iPad, I thought I should give the lots-of-reading-material-in-one-small-device thing a shot.

We chose to download the Bill Gates biography (which was free), the Martin Luther King, Jr. biography and the Walt Disney biography. (MLK and Disney were 4.99 each.)

I read each comic first because I got a little paranoid when  I saw the warning at the beginning that said some of the comics may have material that’s inappropriate for children.  It explained that the comics portray difficult things the people went through, sometimes including child abuse, violence, etc.

Not having any idea what someone else’s interpretation of what is or isn’t appropriate for my children is . . . I told my excited ten-year-old to hold on just a minute while I read the one about Bill Gates.

Which was when I realized that these are (a lot) longer than I expected. I’ve never read a “graphic novel” but I would think they might be categorized more that way.  In my mind, a comic book takes 30 minutes or less to read, but the ones we read were over 130 pages each.

Not that I’ve read a comic book since those long days spent in my Grandma’s basement reading my dad’s old comics from the 50s.

Not that I had any concept of time when I was reading those . . .

But still, I wasn’t expecting these to be so long.  BUT, once I read them and passed them on to my boys, I was glad they were long.  They  were very thorough and the boys really did enjoy them.

They do have what I understand is Asian-style animation where the characters’ faces get extremely grotesque and distorted when they are angry.  This happened a lot in the Bill Gates book (as he was evidently a rather energetic and curious little boy who drove some adults crazy).  I didn’t care for this, and was curious to see what my boys thought.  They did NOT like it.  It’s a little disconcerting to see the grandmother’s face suddenly look like a monster’s face. 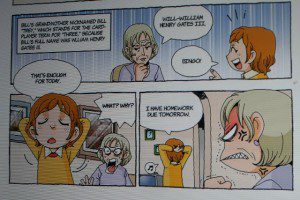 But . . . once we got used to that, we really did like the books.  They were well done, easy and fun to read on the iPad, and truly fascinating. 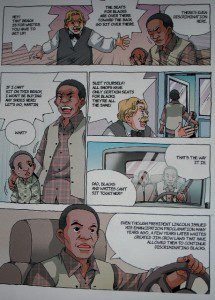 The boys unanimously voted that we had to purchase the one about Martin Luther King, Jr.  That one didn’t have as many of the contorted faces, and did a good job of telling stories from his life that helped the boys visualize the things they had learned in school.  As far as appropriateness, a child being attacked by dogs is horrible to see, even in a drawn picture.  But it was a horrible thing that really happened.   My boys are old enough to understand.

Overall, we really liked the ones we read, though having to read the entire 130+ page book before handing it over to the boys might make me hesitate to get the entire series.

I do love that they can read these in the car when it’s dark.

And that they don’t get lost.

Thank you again to who? Comics for sponsoring my post. Please click here to learn more about the app. Visit who? Comics for updates. I was selected for this opportunity by the Clever Girls Collective. All opinions expressed here are my own. #CleverWhoComics #spon