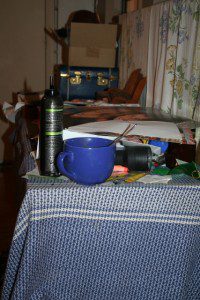 My Father-in-Law is coming to spend the night tomorrow night.  Our house is just a place to sleep between the events of his high school reunion nearby.  I’m happy that we can provide a place for him.

But I’m also a little panicked that he’s coming . . . tomorrow!

I keep holding out hope that life’s craziness will decrease  soon.  I thought it might this week, but had forgotten that Monday was a day off of school.  I love those family days, but I also lost my only day to catch up.  That, plus some freelance stuff that I’m grateful for, but which all seems to fall at exactly the same time during an already busy week!

My house is a wreck. I’ve been neglecting my daily and weekly tasks, and it shows.  Thankfully (unlike pre-blog days), I do know that not all hope is lost and things will get better.

The impending doorbell means that I will pick up the house tomorrow.  In-the-mood-for-cleaning or not, things are going to look better around here by the time my FIL shows up.  Floors will be cleared and toilet will be clean (just the one he’ll use) and sheets will be on his bed.

But what’s not guaranteed . . . are the details.  While I do see details when we have a party scheduled, I am totally capable of convincing myself that he won’t notice the piled-high dresser in the office/guestroom.

So, I decided to tackle that much-despised dresser today.  If I waited until tomorrow when I’m frantically shoving things in closets, it wouldn’t get touched.

I have probably said this in at least one of the other sixty-five posts I’ve written about this same dresser, but NOTHING really belongs on it.  It’s right inside the door from the garage, but has no real purpose.  So it ends up covered with . . . well . . . stuff. 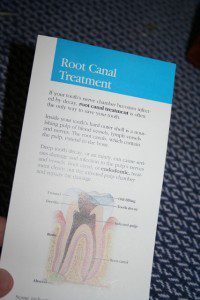 Before I left for the Savvy Blogging Summit last July, I cracked a tooth.  Worried that all schmoozing opportunities would be lost due to personal misery, I was thankful that the new dentist (who had just replaced my old one) worked me in and put on a temporary crown.  She warned me, though, that if it got infected . . . it would be incredibly painful.  I’d know if it was infected right around the time I landed in Colorado.  Just in case, she gave me a painkiller prescription so I wouldn’t be stuck in another state unable to be treated.

I lost the prescription. Surprise, surprise.

I do believe that I looked on this very dresser, but didn’t find it.

Did you know that dentist offices aren’t nearly as nice when you come in asking for a second painkiller prescription?  In fact, they look at you downright suspiciously and say things like, “Wellll, we’ll have to call that one in for you . . . . ”

Another way in which clutter is embarrassing. 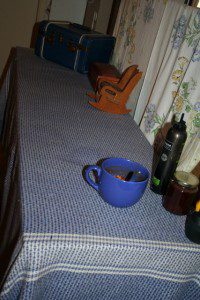 Much better, and it makes cleaning the rest of the room not quite so pointless.

The soup? That was my lunch that I was sneaking bites of while working.  The mousse? This is where I stop the boys on their way to school and make them comb their hair.

And here’s my webisode for this project: (Click through to see it if you’re reading on email!)

This is part of my 31 Days of Details series.

I’ll also be linking up to Orgjunkie.com.