This really doesn’t have much to do with this post . . . but I’m still baffled that my kitchen could go from pretty-much-company-ready to this: 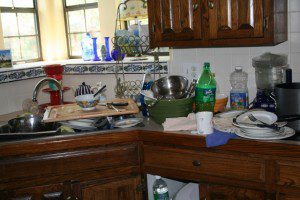 In less than six hours.

Now for my real point.

It’s the last day of the third week of my new all-the-kids-are-now-in-school life.

But as I head into next week, which will be the first when I’ll be on my schedule for the year, I’m trying to make plans. Monday has been working fairly well as laundry/bathrooms/bulk-blogging day. Tuesday and Wednesday I’ll be out of the house for Bible Study and will get my grocery shopping and other errands done. That leaves Thursday and Friday.

When I was in High School and College, I kept up with my studies much better when I was busy. If I knew I had play rehearsal from 6-9, I went ahead and did homework in the afternoon. It was when I didn’t have a schedule that I forgot about History homework until . . . . the class right before History.

Yesterday, I had people over for lunch. Because of the impending doorbell, I went ahead and did Friday’s task of dusting and vacuuming. And now, on Friday, I’ve been able to do some things off of my Want-To list instead of my Have-To list.

I attended an event at my son’s school this morning, and then came home, cleaned the kitchen, and did some Cheater Freezer Cooking that I had been putting off. Now, I’m writing . . . and then I’ll film another webisode for next week . . . which also means I’ll be decluttering something.

My goal is to make dusting and vacuuming Thursday tasks every week.  I hope to do my decluttering videos on Thursdays as well . . . which will mean that Friday is free! Maybe even free enough to occasionally paint something. Like my guest bath. Or my entryway!

I put “Maybe? . . . Hopefully?” in the title because I’m still in the let’s-see-what-this-is-really-going-to-be-like phase of my new schedule, but if I don’t have this as a goal, it will definitely never happen.