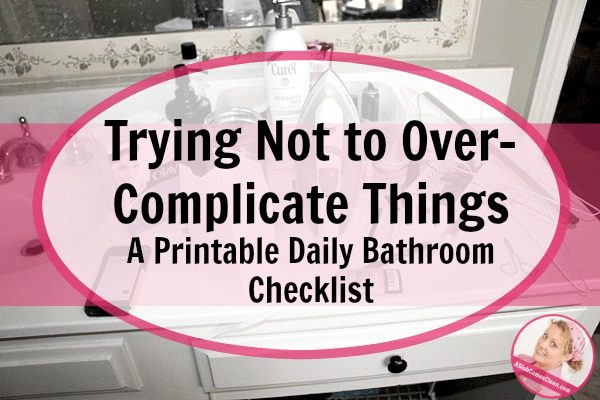 Summer vacation begins tomorrow, and I’ve finally finished the printable daily bathroom checklist that I was determined to have ready before the boys got out of school.  It shouldn’t have been this difficult.
I tend to over-complicate things. 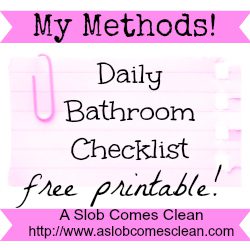 For all of my loosi-goosiness, I do love making a plan. Often a long, detailed . . . complicated one.

Pre-blog, this was one of my problems.

Two summers ago, just a few months before I reached slob-bottom and started this blog, I made a plan. A big one. Charts and stickers and lots of teeny-tiny jobs (that neither my children nor I had ever done consistently before) were involved.
Although the charts were pretty darn fabulous, the intended sudden-life-turn-around didn’t happen.

When I started the blog, I didn’t make any charts or plans until AFTER I started getting things under control. It turns out that the charts don’t keep the house clean.

I have to keep the house clean.

As we head into summer (the time I love, but which generally makes this slob-recovery thing ever so much harder), I’m determined to make it about the doing, and not as much about the charts.

But I’m still making the charts.

Confused enough?  Really, they’re lists. Reminder lists to provide a level of independence for the kids. And as I’ve been working on them, I’ve had to edit and edit and edit some more to keep myself from over-complicating them.

I typed it up last night. I do soooo love my detailed bathroom cleaning checklist. Mmm-hmmm. I can rest easily knowing that no detail has been left out.

But if I’m going to focus on daily maintenance of the bathroom this summer, I need to chill. Even I, a trained actor, will not be able to convince my sometimes-irritatingly-perceptive children that I’m only asking them to do a quick wipe-down of the bathroom if the list that’s hanging on the mirror is two pages long.

Everything in my germaphobe brain wanted to spell out every itsy-bitsy detail regarding the . . . toilet.

I made myself edit that step down to – Wipe down toilet, starting at the top. It will be my job to teach them that this means to start with the handle and move down to the pee-collecting spots at the base of the potty.

Because really, that’s what this is all about. Me teaching. Them learning.

All of us together in a livable home.

Here is a printable version of my ever-so-simplified Daily Bathroom Checklist. I’m going to laminate mine. Since, y’know . . . it’s going in the bathroom. 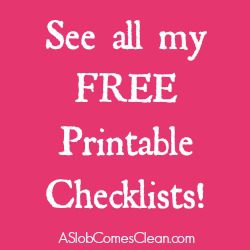 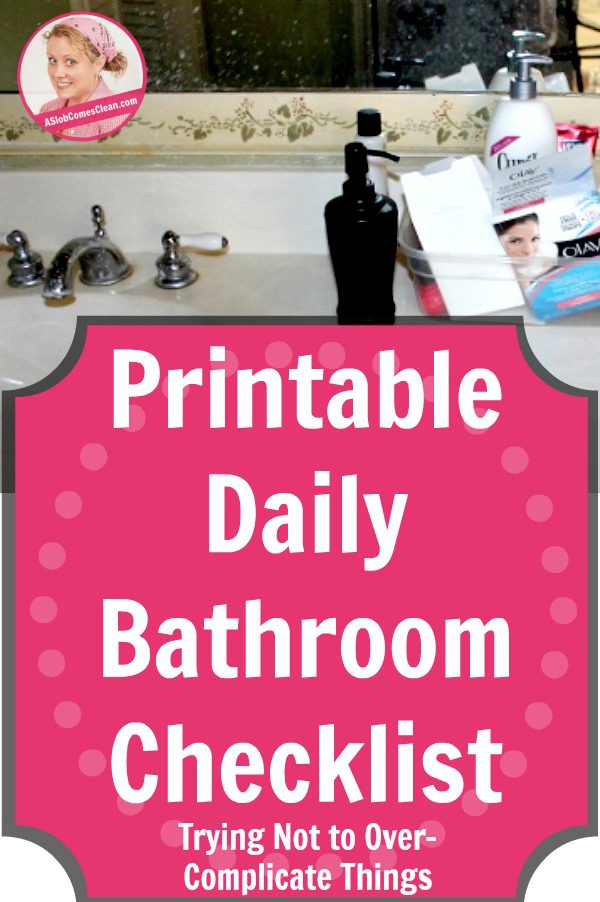 Read Newer Post Taking a Moment to Contain Myself, or at Least My Stuff
Read Older Post June is Today? What? – My Decluttering Update for May