This week has been wild with end of school stuff.  Not only the stuff I knew was coming, but extra things that came up at the last minute and kept me from having a single day at home.

I try to do at least one organizing project a week, and this week I planned to do the boys’ room.  But rather than write a post with no after picture detailing all of the different 20-30 minute sessions I’ve done in there, I decided to pull off a last-minute, less-than-ten-minute project.

Several weeks ago, I purged my medicine collection.  It was a quick project.  But, as several of you suggested, I needed to container-ize the medicines that were left.  This morning, on the spur of the moment (as I was lamenting the fact that I did not have a post to link up to Orgjunkie’s 52 Weeks of Organizing), I decided to grab the container I had finally given up on using in the boys’ room. 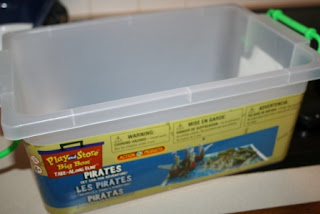 I realized that not ALL of the medicines would fit in it, so I decided to put the ones in there that we search for on a regular basis.

I plunked them in, and placed the ones that didn’t go into the container on the opposite side from the cups and glasses, creating a dividing line that will help stop the clutter-creep. 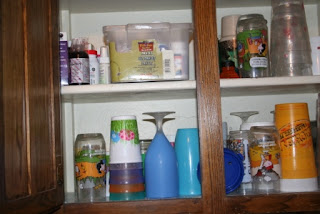 A small, but significant difference.

Hopefully, I’ll be able to post about the boys’ room next week without the need to end with “to be continued . . . ”