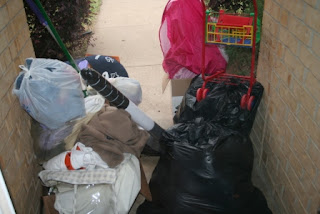 I could easily have had a garage sale.

JUST with the stuff I decluttered this month.

See that pile waiting for the Magical Donation Truck to come pick it up?  That’s nothin’.  I also hauled away at least five back-of-the-Suburban-fulls of stuff.

There are some months when my heart sinks to go back and check my decluttering categroy, only to find that it is almost empty.  But March was a good month.

It began with the Big Fridge Clean Out.  Although I didn’t donate any of that stuff . . . it needed to go.  Cleaning out the fridge is difficult because it requires time, and timing.  If something can’t go in the garbage disposal, but might start to stink if left in the trash for more than a short while, it means I have to purge it on Trash Day.  And many a Trash Day can come and go before I remember.

Then came the playroom.  Fine, the Big Playroom Clean Out.  (I know the titles sound overly dramatic, but these cleanouts deserve a little drama.)  It . . . was . . . bad.  But now it’s good.  And getting rid of several bags of stuff from in there evidently worked, because it has stayed fairly orderly.

And then . . . there was the biggie.  The garage.  The Place Where Homeless Items Go to Die.  While it still has a shelf full of boxes-to-be-dealt-with-later, it is now officially free of randomness, and I can find things.  Garages are scary, and I was petrified to get started, but I’m incredibly proud of it now that it’s done.

Really, after the garage, I didn’t plan on doing much more in March.  But of course, real-life spurred me on.  (That’s how it generally happens.)  Lost tap shoes opened my eyes to the fact that my daughter’s room had once again fallen into chaos, and it was clear that whatever “system” we thought we were using . . . wasn’t working.  Based on the success I’d seen from huge purges, I decided to go all out and clear her room of everything but what she consistently plays with.  So far, it has been a huge success.

Part of me wants to take a break from decluttering because I’m tired.  Another part of me is energized to keep going at this rate.  Honestly, I don’t know what April will hold other than Easter and birthday parties and weddings and general spring craziness.

I’m making it my goal to keep chugging along.  Whatever that means, I’m going to keep going.  Maybe it’s doing a little here and there to maintain what I’ve done.  Maybe it’s jumping on a “free” day to accomplish something that’s been bugging me.

Now I want to read about your decluttering progress!  (Or your decluttering frustrations!)  You can share in the comments, or write a post on your blog to link up below.  If you do link up, please say something like, “I’m linking this up to the March Decluttering Update over at A Slob Comes Clean” and link to the specific decluttering update post, not to your homepage.  If you have any questions on how to do this, please let me know.