I cleaned out my pantry today.

Honestly, I didn’t think it was that bad.  It’s not very full.  Since I’m not couponing like I once did, it’s hard to be motivated to do a big overhaul of the pantry.  Everything can be seen at a glance because there’s so little there. 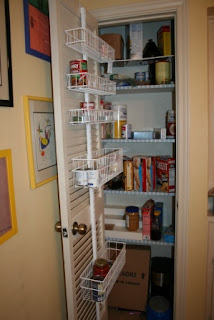 After I cleaned out the cabinet last week, I didn’t see any bugs for several days.  I was hopeful that the rice bag had, after all, been the culprit.

But then, they reappeared.  And this time, in the general area of the pantry.  I’ve carefully examined everything I’ve pulled out of there since we started seeing the bugs, but I haven’t found any creepy-crawlies in food that was stored in there.

Which reminds me of my favorite joke from when I lived in Bangkok.

Although while living there I often found myself drawn to a street vendor’s cart by delicious smells, only to find that the aroma was coming from perfectly seasoned grasshoppers-on-a-stick . . . I don’t want bugs in my house.

Especially in my kitchen.

Especially in my pantry.

So I got to work. 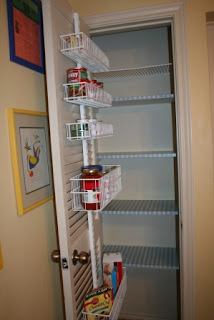 I pulled everything out, and put all canned goods in the handy-dandy door shelf system.  I took the ultra-cool-but-had-nothing-on-it expandable shelf system out to be washed.  It was pretty gross. 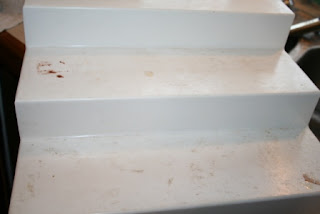 Not sure how packaged foods can produce so much nastiness.

I removed things starting on the bottom shelf, and going up.  I held my breath . . . and squinted my eyes . . . and crinkled my face as I examined each item, sure that I was going to find the source of these pantry beetles.  I imagined I would open a package and find everything moving.

I was mentally ready to go jump in the shower at a moment’s notice.

But I found nothing on the bottom two shelves.  The top two both had several dead ones, but no packages revealed any bugs inside.  I threw away anything that wasn’t in a sealed container.

Once I got to the top shelf,  there were several “Hmmm, wonder what that is” moments. I found a pie crust. 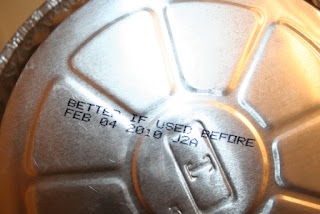 I found a cardboard box that was full of mostly-unopened medicine. 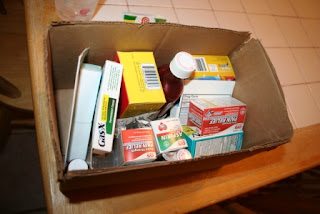 Once I had everything out, I vacuumed off the shelves (you know how I love my hand-held vac) and then scrubbed them down.

I replaced the now-gleaming expandable shelf.  Not that I had much to put on it.  But I went ahead and expanded it fully, since pantry space really isn’t at a premium right now. 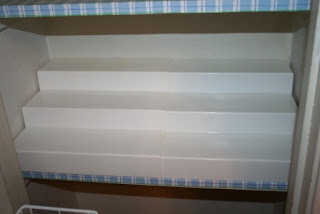 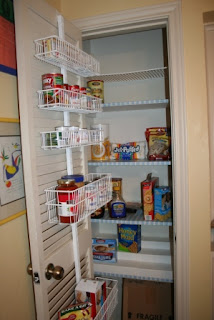 I put back the things I had decided NOT to throw away, and am hoping that this picture will motivate me to do the shopping I need to get done tomorrow. 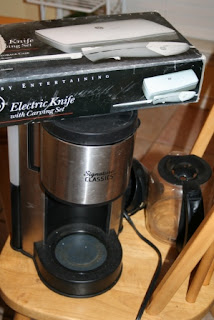 And as I keep on learning (over and over again) in this deslobification process . . . . decluttering is never EVER done.  The last time I worked on this pantry, I’m sure I thought of a good reason to keep our second electric knife, when we rarely use one.  But with the passage of time, and the knowledge  that I still hadn’t used it, I found it easier to donate.  And now that we have a carafe-less coffee-maker, we probably don’t need to keep two additional ones, just waiting for the carafe to break.

I’ll be linking this up at Orgjunkie.com, for her 52 Weeks of Organizing.

And don’t forget to come back for February’s Decluttering Update on Tuesday (which is March 1 . . . can you believe it?).  You can leave a comment or link up a blog post and share what you’ve decluttered this month!