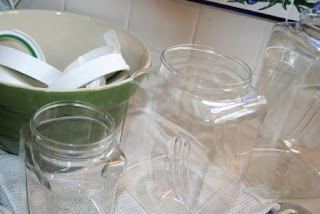 I recently bought a set of storage canisters for my flour, sugar, etc.

Somehow, this makes me feel like a real woman.

I thought that as a part of a new generation of appreciative-of-beauty-and-style-in-every-facet-of-life women, I would have pretty glass canisters sitting on my counter.

Obviously, this was also when I was still living in slob-denial.  I thought that once I was married, and then once I had kids . . . my counters would stay magically clear at all times.

Instead, my glass containers were generally spotted with cooking splatters . . . and hidden behind piles of who-knows-what.

As I’ve worked on this deslobification process, I’ve managed to get the hang of cleared counters a little better.

But it’s too late.  My glass containers are long gone, decluttered in an I-just-can’t-do-this-anymore moment, and I’ve learned to love my free-of-fru-fru counter tops anyway.

Because of my artsy-canister-failure, I thought for years that I couldn’t handle canisters of any sort.

Honestly, I didn’t think I deserved them.  I know it doesn’t make sense, but looking back, that’s how it was.

So many failed attempts at organizing kept me from even trying.

But recently, I decided that I wanted some.  I feel that I’m ready for the responsibility of transferring flour from its package into a container.

It’s a commitment, I know.

I bought the canisters a few weeks ago. I washed them last week. I dreaded putting them to use.

About a month ago, I called an exterminator because I was seeing little tiny bugs.  The treatment helped, but I’ve started seeing them again.  I put one in a baggie and the bug man took it to his entomologist (can you imagine having that job?).

He said it was a pantry beetle.  It probably got into the house in something we had purchased . . . like flour, rice, or oatmeal.

I was petrified to go searching.  My skin crawled every time I thought about finding a big moving pile of these teeny bugs.

But today, I did it.  I started in the cabinet that held the things I wanted to transfer to canisters anyway. 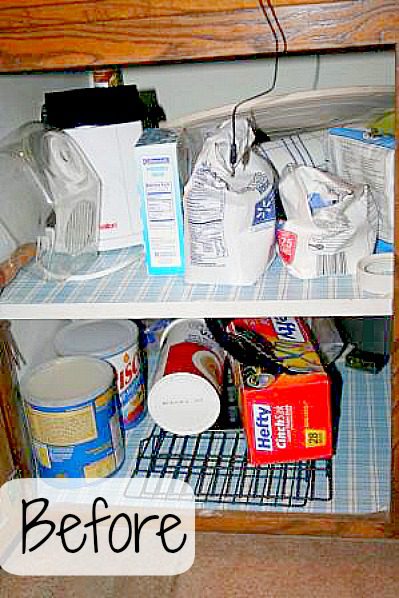 I decluttered this cabinet about a year ago, so it’s not that bad.

I looked inside every bag of something-or-other, and stared for a moment to see if I saw anything moving.  I threw out two partial bags of flour and some sugar.

I never found a big mass of the bugs, but on my rice bag, the one we heat up in the microwave instead of a heating pad, I found several.  I took it outside and banged it around until they were all off, but then I saw that there was a loose seam where others could easily have gotten inside.

I decided to throw it away.  I almost cried. 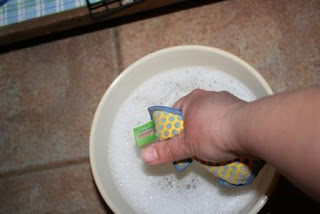 After I took everything out, I scrubbed out the cabinet, reasoning that I’d rather drown the bugs than smush them.

Because I had decluttered pretty well a while back, I didn’t get rid of too much. 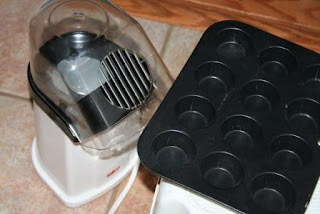 Just the air popper (I’ve recently re-discovered the joy of stove-popped popcorn), and a mini-muffin tin.  I have a bigger mini-muffin tin, and since I don’t use either one, I thought I probably shouldn’t keep them both.

I chose to keep the fryer, even though we haven’t used it since the last time I decluttered.  We rarely fry anything, but when hubby does want to fry fish . . . . it’s nice to have.  Of course, according to the instructions I found, it’s 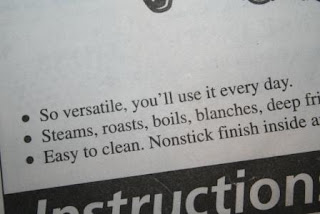 After I trashed quite a bit of brown sugar and powdered sugar that had been in there for a very long while (evidently from the days when I thought I was a baker), I had room to move my rarely-used cooling racks into that space, removing them from the drawer under the oven.  I’m so excited about this, as that drawer has been overfull for a long time, and was difficult to close. 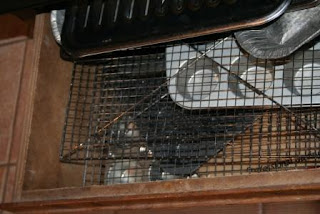 In the end, I was pleased with my grown-up-looking cabinet. 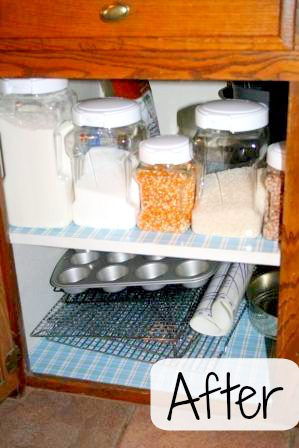 Because I used to be the Tupperware Lady, I not only have heard, but have given the speech about how bugs come home with you in your packages from the store, and if you store your food in airtight containers, they suffocate and die. 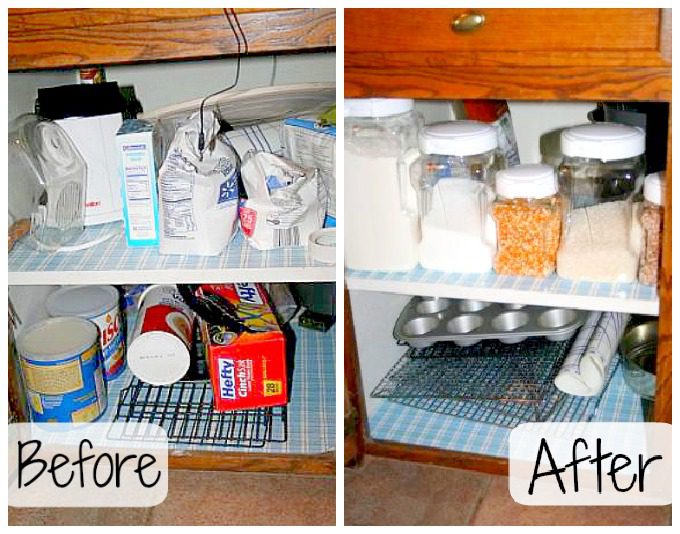 I’ll be linking this up to Orgjunkie.com‘s 52 Weeks of Organizing.