I’m thankful that I have a nice, big, walk-in closet.

Not that I’ve been able to walk into it for months now. 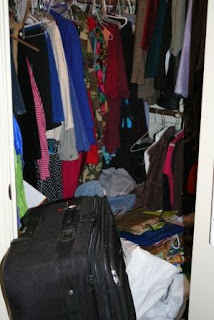 Or even shut the door.

But the bug man is coming again, and I’d really like him to be able to get into my closet.  I’m pretty sure I didn’t worry about it last time.

I found all kinds of stuff in there.

My closet is the dumping ground for this house.  It’s where gifts are hidden, “can’t lose” items are stored, and random-things-with-no-home are thrown in moments of desperation.

Things like the box for my new crock-pot, that I didn’t want to throw out until I was sure it worked.  Since I don’t need that box anymore, I decided that I’d use it as a starter Donation Box.  I was sure that I’d have tons to put in it.

Not so much.  Here’s what I decided to donate: 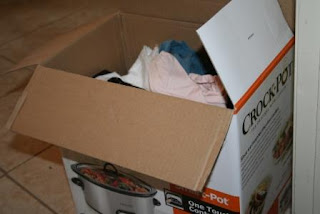 But here’s what I decided to trash: 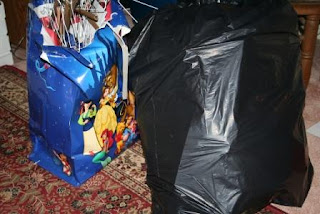 Translation:   Turns out that my closet is a literal dumping ground.

With the non-trash, I had to use the second of my two decluttering questions quite a bit.  “If I needed this item, would it ever occur to me that I already had one?”  See, I found things like party favors for my daughter’s 3rd birthday party.

She’ll be five in four months.

The closet is far from perfect, but I can walk into it now.  I didn’t even attempt to purge clothing, as that will be its own project. 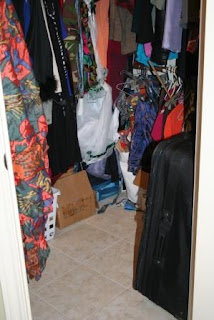 And here’s my encouragement to any other recovering slobs – it was easier this time.

The big frustration I face in this deslobification process I’m going through is that I work and work on an area, throw tons of stuff away, and then go into a funk when I realize that it’s back into disaster status three months later.

But even though it’s horribly embarrassing that the stuff covering my closet floor was mostly trash . . . trash is easy!  Clutter is more difficult because it’s individual items that have to be analyzed and agonized over.  There was definitely less clutter than the last time I did this.

And the same is true for my master bedroom.  I was seriously disgusted with how bad the master bedroom got over Christmas break.  I had been making progress, only to have it look equally as bad as it was pre-blog with just a few weeks of frantic-pre-company-stuff-shoving.  But on Saturday, I worked on it for short while, and found that my efforts paid off much more quickly because of the work I’ve been doing on it for the past year.

Definitely helps me see the advantages of that minimalist concept.

Go check out other closet projects at A Bowl Full of Lemons.  The challenge is technically for a coat closet, but she said to do any closet.