Mamas know all about re-prioritizing.

Whether it’s the big and noble stuff like adjusting your vision of the mom you dreamed you would be to the mom you are capable of being, or the little stuff like shortening an already short list of must-have items from the store when your toddler falls and puts a gash in her knee.

Or maybe it’s the heart-wrenching stuff like making a tough decision when your son’s baseball team unexpectedly makes it to the championship, but the championship happens to be scheduled for the same weekend you had planned a much-needed family getaway, and put down a non-refundable deposit.

Or to be totally un-poetic, I sometimes say that parenting is like having a stomach virus. Don’t make any plans that can’t be changed in an instant.

I’ve accepted the naturally required re-prioritization that comes with this mama-job. Sometimes, I even feel like I’m good at it.

But I get really really . . . really tired of the re-prioritizing that I have to do because I’m a slob.

Last night we started up our church home groups again for the fall. We started having them here around the same time that I started the blog. It was a big step for me to commit to having people (potentially-bathroom-using people) in my home on a weekly basis. But it all worked together well. My blog-induced-focus helped me stay on track and be able to open the door each week, and having a reason to see my home through others’ eyes on a weekly basis helped my focus.

But with summer, things got out of control. I have worked hard in the past few weeks to get back on track, and am doing so much better. However, when I went through the house yesterday (thinking I only had to pick up a little here and there), I was shocked to see more clutter spots than I expected to see.

Everything in me wanted to devote this entire week to conquering those spots.

But alas, the bug man’s coming.

We’ve had more than a few bugs appear lately, and so I’ve scheduled someone to come out and . . . well . . . annihilate them.

The problem? Ummm, these guys spray along the edges of the walls. The same edges where clutter seems to magically collect. Which means, I have to do something about my master bedroom. And my kids’ bedrooms, which while not as bad as they could be, belong to people who inherited the gene from me that makes them think that a cleared middle-of-the-floor is a cleared floor.

Deadlines are good. I am going to be forced to get some major stuff done before the bug guy comes next Monday. But if I hadn’t let things pile up, I could be spending this week doing the other things that need to be done. Or even better, if I could keep my house under control, piles and edges and everything . . . I could be doing something fun this week!!! Like painting my entryway!

But here’s my little project for the morning. Nothing like the threat of lethal chemicals being sprayed on your kids’ baby pictures to get you tackling the impossible spot. 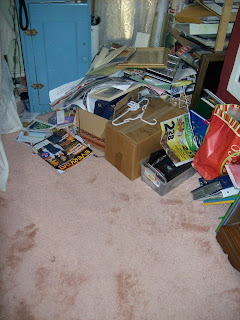 That’s my impossible spot. My spot full of excuses.
After an hour and a half, it looks like this: 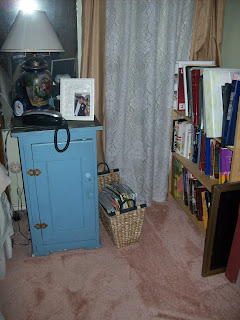 For some reason, I get emotional looking at these before/after pics. When I said “impossible,” I really did mean it. I had such a huge mental block against the clutter in this area. It was my last resort dumping ground for way too many things. But since I worked in this spot a few weeks ago, this time it felt much more possible.

I’ve had that magazine basket (which I love) for over a year now. But it was on its side under the pile of stuff. Neither serving a purpose, nor being enjoyed.

I struggled with the magazines in the pile. They represent ideas. Ideas of all the things I dream of doing once my priority list is no longer full of decluttering projects. I tried shoving them all in the basket. 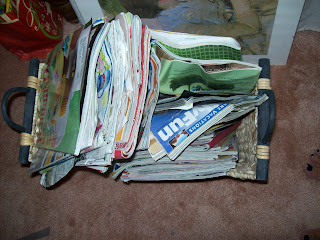 So, using my fairly-recently-acquired understanding of the purpose of containers, I started to go through them and make decisions about which ones to keep. The familiar overwhelmed-by-clutter-head-pounding started. So I decided that since I can look up specific projects on the Internet, and keeping the magazines was solely for the purpose of page-flipping-inspiration, it didn’t really matter which ones I kept. So I did a chuck-a-chunk. I just pulled out two big handfuls, not even paying attention to which ones they were . . . and stuck them in a trash bag.

I may donate the ones I’m getting rid of to a teacher, or I may just throw them away.