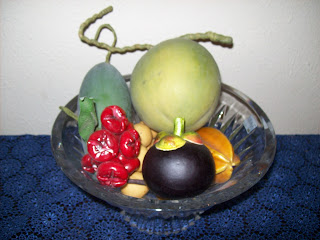 The first week of our Return to Routine is complete.  Over the course of the week, I have done most many of the items on my Daily Checklist every most days.
I have, however, done my Weekly Tasks each day.  And now that the week is over, my house looks nice, feels nice, and overall makes me happy.  It may not be modern and impeccably stylish, but when it’s clean . . . it’s a beautiful home.
Today, Friday, was dusting and vacuuming.  Since dusting had been my 4yo’s job all summer, I took the time to be quite thorough today.
Y’know, even dusting the tropical fruit.
I bought that fruit when I lived in Thailand.  I dreamed of using it as a quirky decoration in my future perfectly-clean-all-the-time home.  My future perfectly-behaved-and-interested-in-their-mother’s-past children would play with it, and listen to all of my fascinating stories . . . again and again.
But the fruit lived in my closet for at least 8 years, until I unearthed it recently.  The reality is that as a slob, things that are just-for-lookin’-pretty don’t really happen.  If there’s a flat surface available for a “tableau” it’s likely to also be available for random stuff-stacking.  The pretty things get lost in the crowd.  In my years of housekeeping despair, I gave up on displaying anything.  It wasn’t until I started making progress last year that I started to see the point in trying to decorate.
This fruit makes me happy.  It’s not a designer touch, just something I enjoy looking at.  And when it’s sitting on a surface all alone, I don’t mind dusting it.
If you’ve read from the beginning, you know that I didn’t even attempt Weekly Tasks until I was months into this journey.  They overwhelmed me.  It wasn’t until the house was more under control due to consistency in my Daily Tasks that I started trying to be consistent with the big stuff.
But being consistent with BOTH the big stuff and the little stuff has helped me see how they work together.  If I don’t do the little stuff (the daily checklist tasks), big things like mopping become an all morning job.  If I haven’t been sweeping the floor everyday, then there’s a very good chance that I’ll have to do more than just sweep before I can mop.  I’ll probably have to move last Sunday’s pile of newspaper to the recycling basket and pick up and distribute toys and other junk.  In the end, I begin to view mopping as a huge job and let myself make excuses to not do it in the future.
But, even though I’ve known for a while that the daily tasks make the weekly ones possible, it hit me today how much the weekly ones help me on the daily ones.
Confusing enough?
If there isn’t an abundance of junk covering every surface, it’s easier to dust.  But it’s when I dust that my Selective Vision clears up, and I see the things that have somehow escaped my field of vision during the daily 5-minute-pickup-times.  For example: 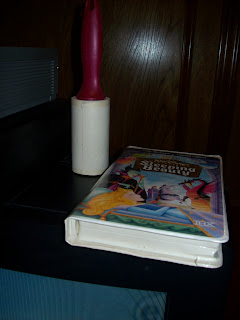 These were sitting on top of our TV.  The video is one of many that end up piled there.  At least the video has an actual reason to be in that spot.

But the lint brush?  Really?

And the worst part is that I’m pretty sure that lint brush had been there for . . . several months.

My point is that it all works together.  Even when I’m making a point to straighten, pick-up, etc. . . I still miss what should be obvious.  But by having a Weekly Routine in place, one which makes me do more detailed cleaning tasks, I am able to compensate for my Selective Vision.