As much as I don’t feel like making a menu plan on Mondays, it’s amazing how much of a difference a plan makes. The last thing I want to do when I come home from the pool is make decisions about what to cook.

First, before I share our plan, I need your help. Instead of steak, hubby made fish last Saturday night, and we had a feast. I offered to find a recipe for hush-puppies, but of course put it off until it was almost too late. I ended up using the first recipe I found on the Internet, and although it didn’t sound terribly flavorful (especially since I wasn’t going to use the bacon fat it called for), I hoped for the best.
The best didn’t happen. While they didn’t taste bad, no one asked for seconds, or really even finished firsts.
‘Cuz they’re big.
Really big.
I’m calling them Hush-Mastiffs instead of Hush-Puppies. 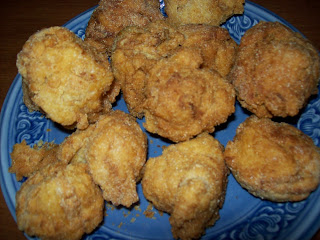 So I need your help. I know I could chop them up and use them as a topping or even to make some kind of crust, but for what? Do you have any great recipes that could make use of these?
They don’t have any flavor other than mediocre corn-bread flavor.
OK, now for my menu plan:
Monday – Asian Chicken Salad We love this stuff. Actually, hubby and I love it. I have a general rule that I don’t make anything different for the kids for supper. They can make choices at breakfast and lunch, but supper is love-it-or-leave-it. However, this is one of the rare occasions when I will probably make an exception.
The recipe:
2 (3 ounce) packages ramen noodles, uncooked, crushed (I crush them in the package to avoid a mess)
1 cup slivered almonds
2 teaspoons sesame seeds
1 bag of pre-packaged cole-slaw cabbage (buy the one without the dressing, as you won’t need it)
1/4 cup vegetable oil
3 tbsp. distilled white vinegar
3 tbsp. white sugar
2 tablespoons soy sauce
I toast the crushed ramen, almond slivers, and sesame seeds on a cookie sheet in the oven at 300 for about 10 minutes. I generally set the timer for 5 minutes at a time, and when I start to see the noodles browning, I take it out.
In a small saucepan, bring oil, vinegar, and sugar to a boil for 1 minute, while stirring. After it cools some, add soy sauce. This is your dressing for the salad. It’s best to chill it.
Toss everything together. I’m planning to turn it into a meal by adding chopped cooked chicken.
I originally found this recipe at Allrecipes.com, but modified it by using suggestions from several of the comments on the recipe.
Tuesday – Beef stroganoff
Wednesday – Crock pot BBQ Chicken Sandwiches
Thursday – Something with the Hush-Mastiffs.
Friday – Out for MIL’s b-day.
Saturday – Grill out steaks.
Sunday – Dinner at a friend’s house.
For more menu-plans, go visit Menu Plan Monday over at Orgjunkie.com.