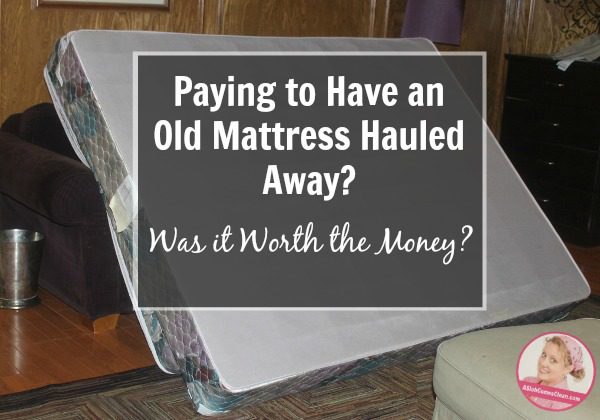 After mphty-mph years, we got a new mattress!

I won’t talk about how long we knew we needed it, or about how old the mattress was that we slept on for our entire marriage until last month.

But I will talk about my excessive cheapness and how that was a major factor in waiting so long.

Mattresses are expensive, y’all. And stressful to purchase since they’re one of those things you’ll spend a LOT of time regretting if they’re not as comfortable as you thought they were. Y’know, in those five awkward minutes of lying down and rolling around in front of an expectantly waiting salesperson/stranger.

But we did it. We finally did it. We rolled and shifted and rolled again and shifted again. We made awkward jokes about the shifting and the rolling and finally made a decision. And we ordered. And we paid.

But at the moment of payment, decisions are required. Because it’s never as simple as just paying for a mattress, right?

What about the old mattress?

Do we want to pay fifteen dollars to have it hauled away?

And haven’t I heard radio ads from other stores saying they’ll haul away an old mattress for FREE?

Oh, how my frugal brain looks for reasons to procrastinate when forking over big chunks of money.

“Yes, I will pay you an amount of money that’s less than what it would cost for us to go out to eat at a fast food restaurant to not have to worry about getting rid of that old blankety-blank mattress.”

The second, wordy version of “yes” is what I said in my head. The first, single-word version is what I actually said to the woman taking my money.

Here’s the thing. I know how things go in my house. Many times, I’ve uttered an Auto No to something that will cost me money.

Many, many times, I’ve lived with large items sitting in my home waiting on me to get them out. Ummmm, didn’t I just write about a big, humongous chair that I stubbed my toe on many times between the time I decided I didn’t want it and the time when it actually left my house?

Sure, we could have saved fifteen measly dollars taking that mattress and box spring to the dump on our own.

Except we’d have to borrow someone’s trailer to get it there. And we’d have to spend a Saturday morning borrowing the trailer and loading up the mattress and driving to the dump. And I’d have to devote an hour or so in the week before to figuring out where the town dump is, and learning what we have to do to be able to dump there.

We’ve never even been to the town dump in this town. In past cities, though, we had to have proof of residency. And I seem to remember needing special tickets that we picked up at city hall.

That’s a lot of hassle, and it was worth fifteen dollars to me to not have to deal with that hassle.

But for some reason, I hesitate in those key moments when the salesperson asks if I want to pay extra on what is already an overwhelming purchase for a cheapskate like me.

But I said yes.

Because this was the scene in my living room for about 6 hours before the delivery men arrived with my new mattress. 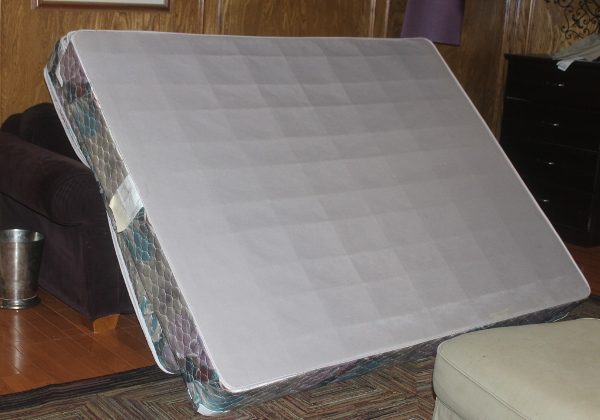 I’d taken the old one off of the bed so I could use this ridiculously-rare opportunity to clean out under the bed while there was no mattress or box-spring on it.

So worth fifteen dollars to me.

Would have been worth forty.

Thankfully, it wasn’t fifty. I may not have learned enough yet for that amount.

Yay for not moving (and moving around) that monstrosity sixty five times before it left my house.

If you’re horrified, I get it. I’ve been there. I’ve pursed my lips in disapproval at people who “wasted” any amount of money on things they could technically do themselves. But that was before I understood and accepted the value of open space in my home. The value of a Saturday morning without the hassle of a trip to the dump or the dark cloud of needing to take a trip to the dump hanging over my head. It’s been a long road, but I’ve learned a lot.

Oh. And that guy who takes everything I want to donate? The one thing he won’t/can’t take is mattresses.

If you are desperate to change your mindset, and you want home management strategies that actually make sense (to us not-naturally-organized types), check out my new book, How to Manage Your Home Without Losing Your Mind. 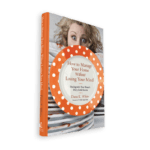 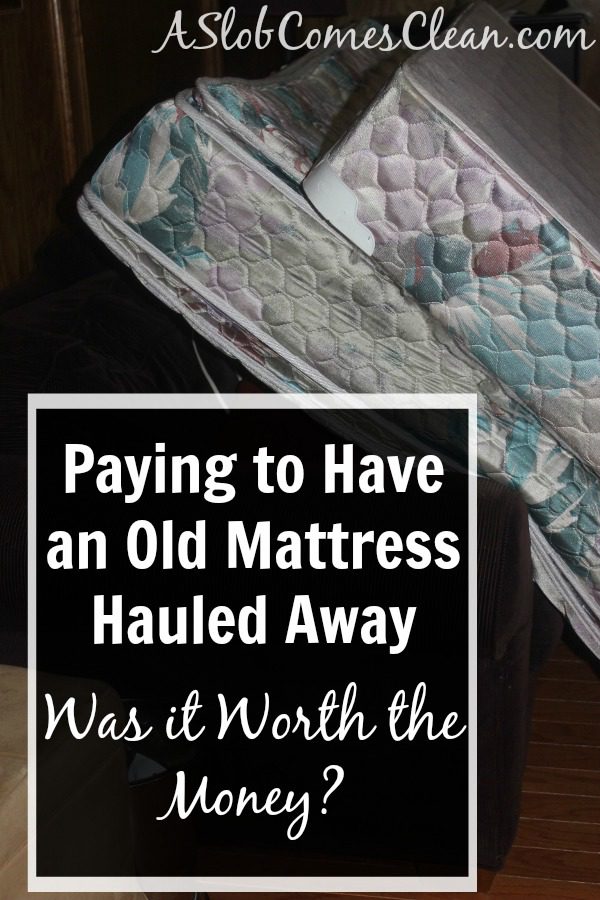 Read Newer Post 103 What to Do With Shipping Boxes? Podcast
Read Older Post Dealing with Decluttering Regrets – What if I’ll Need This Again?