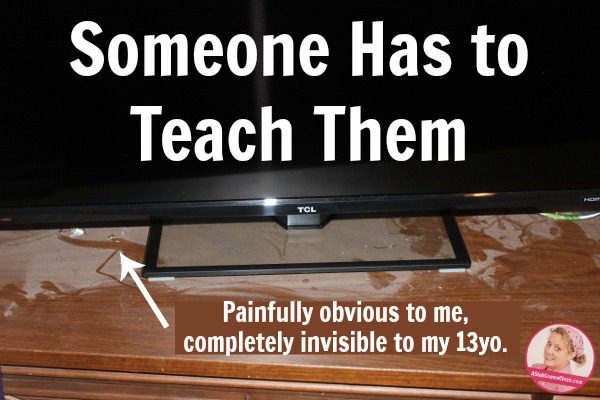 Like almost every mother since the beginning of time, I found myself thinking, “How did my son not see that huge mess??”

My 13yo recently had a highly brag-worthy modeling job. The back of his head will appear on the cover of my mother’s book that will release in September.

Anyway, with the money he earned, he had enough to buy a certain flat screen tv he’d been eyeing. It was the cheapest one he could find with the best reviews. Evidently, the 798 pound even-bigger not-a-flat-screen TV we had in the gameroom was the wrong shape. He found this out at a friend’s house when he saw that on modern-shaped televisions, you can actually see the score of the basketball/baseball/football XBox game you’re playing.

The square TV cuts that off (along with some other important stuff) .

The new TV arrived on an evening when I wasn’t home. Other than dad helping him move the Mammoth Old TV, he set it up all by his very self!

He did a great job, other than what seemed to ONLY be obvious to me: the insane amount of dust under the new CLEAR-BASED TV.

Like, nothing whatsoever to hide the dust that had been hidden for a very long time.

So I taught him. I had him lift his new pride and joy so I could dust underneath.

These are the moments when I have to remind myself of a story I told in a recent podcast.

I was working at a summer camp, cleaning bathrooms. As bathroom cleaners, our instructions were extremely detailed and I knew for a fact that I’d done every single thing required of me.

But when the woman in charge came in, she pointed out the faucets on the sinks. I had absolutely no idea what the problem was with these faucets.

I’d wiped them down. I’d followed the directions. I was done.

But she explained they weren’t shiny.

I had never even noticed. But once she taught me to look for shininess, I noticed. Now, I always notice and I actually enjoy shining the faucets.

But someone had to teach me.

It’s my job to teach him.