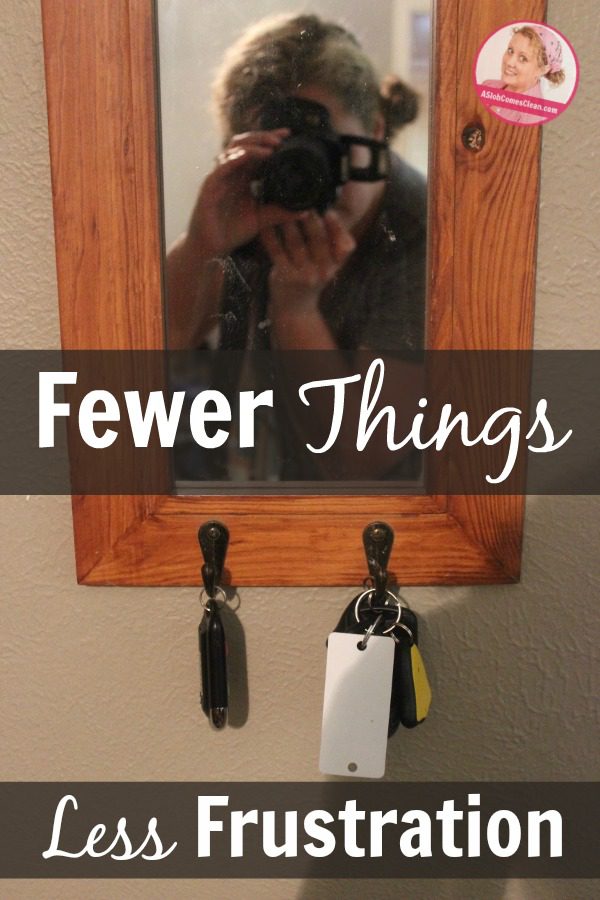 There was cause for great celebration in SlobLand last night!!!

We found the keys to our Camry!!!!

Lost keys happen. They happen around here way too often. But this was a very special case of Seriously, Do These Things Happen to Other People or Just US!?!?!?!

The (way too long) story:

We bought our Camry (used) in our second year of marriage.

That was fifteen years ago.

The little car served us very well for a very long time. But in the past year, not so much. Things start breaking. The radio knob disappeared. The light switch fell off. The vinyl on the arm rest cracked. The fabric on the sides of the doors started peeling, both doors at the exact same time.

We couldn’t ride in it as a family because one of the back seatbelts didn’t work. The passenger door hadn’t opened from the outside in years.

And yet it ran. Hubby drove it to work each day and parked it proudly(ish) next to all the fancy cars.

But then it became officially unreliable. Because of the ba-jillion other problems, we started looking for another used car rather than pour money into it.

Since we made the switch to only paying cash for cars a few years back, we’d been saving up a car payment equivalent each month since then. We had enough for a decent, cheap car.

Especially when we decided the “new” car would be mine and needed to get better-than-average gas mileage. With three kids at three different schools, and one across town in Junior High, I drive a minimum of 26 miles a day. Minimum. Add hour-away monthly speaking engagements and hour-away weekly trips to help my in-laws, and it was time for mama to drive a non-guzzler.

And then one day, a few months ago (almost exactly two months ago . . . ), the Camry wouldn’t start at all. When I expressed concern about him continuing to drive it, Hubby did admit that in the recent rains we’d been having, the electrical system seemed to go out every time he drove through a puddle.

Some friends offered to lend us their extra car while we continued our search.

We gratefully accepted their offer.

One day, soon after we started driving their car, I ran out to get my (affiliate link alert) handy-dandy cassette-converter-thingy

so I could listen to podcasts while I drove our friend’s car.

I came back into the house, and randomly put the key down somewhere.

That night, Hubby asked where the key was. It was lost.

Here’s the thing. We weren’t using that car, so I didn’t HAVE to find the key right away. So I didn’t look. I assumed it would eventually show up, as things do.

That (so dumb) attitude is exactly why we generally only know where one set of keys is at a given time. I know where the ones are that I’m using. I have to find those, y’know . . . so I can drive the car.

The other set shows up eventually, we rejoice, and then the next time I can’t find my keys, I grab the “other” set (because that’s more practical and expedient than wasting time looking for the set I’d been using, right??) and go on with life until the original set randomly turns up.

OK. When I ONLY have one set, I don’t lose it, because I HAVE to have it. When it goes missing, I search and search until I find it because I have no other choice.

When I search on the same day the keys were lost, I find them.

Maybe it’s because they haven’t had time to migrate to another spot, under a pile of paper or behind a couch.

Or maybe it’s that my brain has better memory when they were lost so recently.

But as soon as I have two sets, I lose one and don’t look for it immediately, so it’s lost for a much longer time. It’s what happens.

Well, in this unique case, the single key we had available for the Camry was kind of like an “extra” key because the Camry was basically an “extra” car. We weren’t driving it. We didn’t need it.

So, the next weekend when we realized we should clean it out so we could donate it to one of those running-or-not-we-don’t-care donation places, we were slightly irritated that we couldn’t find the key.

But we figured it would turn up. It always does.

But eventually is way more annoying when you’re waiting for it to happen so you can move a huge, embarrassing eyesore from in front of your house.

Eventually, we got our new-to-us car.

But we didn’t have a garage door opener to put in it, because it was locked in the Camry.

My son wanted to use Hubby’s ten-pound dumbbells. Sorry, son. They’re locked in the Camry.

My oldest wanted us to give the car to the place that promised free Mavericks tickets with a donation.

We thought that was a great idea.

Last weekend, after almost TWO MONTHS of not being able to get into that car, we spent Saturday going through junk drawers and paper piles and jacket pockets and under-the-couch treasures and everywhere we could think of, looking for ANY one of the three blankety-blank keys we have for that car, but we didn’t find a single one.

It was no longer funny. Just maddening.

But finally, last night, after thinking to myself that I wished I had put one of (affiliate link alert) the new electronic Key Finders on Hubby’s keys, I stopped.

A vague memory entered my mind. Had I replaced his key finder? Maybe? He wasn’t a big fan of them, since the first time we got them, something at his office caused the yellow one to beep at random times. He’d finally removed it.

But in this vague memory, I saw Hubby’s eyes rolling and my own rolling right back at him as I put one from the new set of Key Finders on his favorite, least-often-lost Camry key.

So, I got the remote key-finder (which hangs on our key-hanging station ALL the time) and held my breath as I walked through the house, pressing the blue button. I walked into our bedroom (which we’d torn apart multiple times in our search for the key), and heard a faint beeping.

It grew stronger as I walked toward our closets.

Even stronger in Hubby’s closet.

Finally, in the pocket of Hubby’s coveralls which get worn once a year at the most, I found it. It had been in that pocket since our “Snow” Day.

Yesterday was May 3rd.

“Extras” create an endless cycle of crazy in this house. When I have extras, I use them. That always sounds so much easier than looking for (or walking across the room to grab) the one I used yesterday. But after I’ve used up all the extras, they’re now strewn across the house, creating a big mess, and/or the original one(s) are long lost and much more difficult to find than if I’d looked on that first day when they weren’t conveniently at my fingertips.

It’s the same with ponytail holders, with clothing, with dishes, with whatever-else-you-can-name.

When I limit the amount of stuff I have, my “stuff” naturally stays under control more easily.

Not that I’m saying I should have fewer keys.

Note: The key with the Key Finder on it wasn’t even the one I most recently lost.

Note #2: I am thankful the Key Finder still worked even though I washed and dried those coveralls. I doubt that’s recommended.

Another Note: I promptly added a Key Finder to the single key I have for our “new” car. I already loved those things, but now I love them even more, and I think Hubby is finally on board with them and considers them worth the annoyance of the random beeps.

Yet Another Note: Key Finders don’t work if you don’t remember you have them and never actually push the button on the remote.

One Last Note: If you’re confident you can solve all my problems by suggesting I hang a hook by my door and ALWAYS put my keys on it when I come into the house, welcome. You must be new here. Always is a fictional concept in our home. That’s my key finder in the picture at the top of the post.

Obviously, the Key Finders are worth the money in this house, even though they don’t last forever. I’m on my second set. Here’s an affiliate link to what I think is the current version of the set in this post

, though you can get a set with fewer colors that is cheaper. (And now I’m using these – affiliate link again – Tiles)

My key finders were sent to me to review. That review can be found here, and all obligation to mention them ended once that post went live more than a year ago. Their mention in this post is purely because they saved my sanity once again.