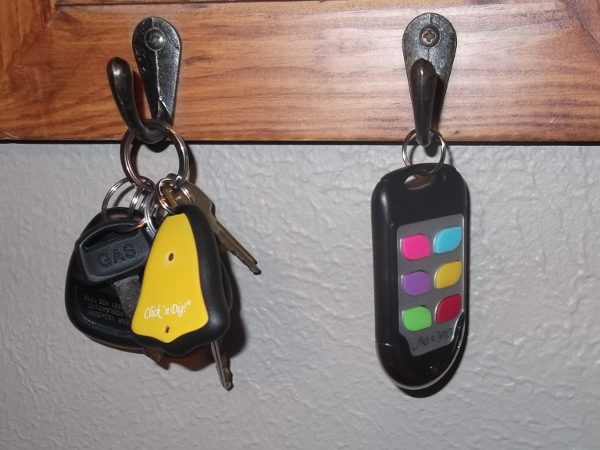 Back in December, after a longer-than-usual-and-totally-unsuccessful search for my car keys . . . I declared to the world that the only thing I really wanted for Christmas was a remote key finder that several of you mentioned in the comments.

I was tickled to death that Click ‘N Dig, the makers of the wireless key finders that looked the best, agreed to send me a set to review.

They sent them back in December, and I had every intention of reviewing them sooner than now.

But I didn’t.  I found myself thinking, “But I haven’t had any dramatic key-losing events since I got them, so what would I write about?”

And it’s not like I haven’t used my key finder.  I have.

While I have a handy-dandy key hook hanging by the back door, there’s only a 50/50 chance that the keys I need will be hanging from it when I need them.  But the thing that is ALWAYS there is the six-button remote.  I push the red button (because the red key chain is attached to my main set of keys) and start wandering the house listening for a little beeping sound.

And every single time I do this, I find my keys within a minute.

I’ll be honest.  Part of me wishes the beeps were as loud as a truck backing up, but the rest of me acknowledges that the high-pitched, five-in-a-row, need-to-listen-carefully-but-you-can-totally-hear-it beep is probably better.

It’s called “Click ‘N Dig” . . . which means you click the button, hear the beep and then start digging around where you heard it.  Make sense?

I do have two negative things to mention, though they’re not big for me.

It has never NOT eventually beeped for me, though, so I’ve not shed even one teensy-tinesy tear over lost keys in two whole months.

The other negative is that my keyring occasionally beeps at random while I’m out and about.  It hasn’t done this at any inappropriate times, but seems to do it a LOT when I go to my husband’s office.  Like, the minute I drive into the parking lot.

And one day this week, we switched cars and he said my keyring beeped a lot that day in his office.  Again, the beep isn’t crazy-loud, but it is kind of annoying.

BUT, he has the blue keyring on his keys and that one doesn’t beep at all at his office.  Obviously, there’s a frequency thing going on in that location.  Since different colored buttons make the different finders beep, you could switch out for another color in your set if that was an issue.

So are they worth the money?  I believe they are.

I have the set with three thin finders (that can be attached to remotes or phones or stuck in your purse) and three keyrings.  There are cheaper sets with fewer keyrings/finders.  We are using all three keyrings that came in my set, and one of the thin finders is in my purse.

They really, really do make my life easier.  Once a day (sometimes more), I hit the red button and walk through the house listening for the beep to locate my keys.

If someone only used the remote key-finder for a rare, once-a-year Lost Keys Drama, the negatives such as the occasional beeping might be a big annoyance.

However, as someone who randomly puts keys down in not-at-all-logical places with no cognitive awareness whatsoever . . . the remote key finder is like a dream come true.

A dream that occasionally gets on your nerves, but that you’d never want to live without again.

Oh, and the package includes an extra set of batteries!

Click ‘N Dig provided me with the F6 model to facilitate this review.  I was not paid for this review, and the opinions, experiences (and intense scatter-brainedness) are completely my own.  The links to the key finders are my Amazon affiliate links.