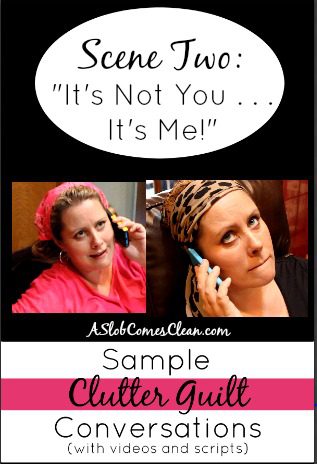 My first choice is to not worry about the guilt, but sometimes that isn’t possible. If you’re paralyzed, and can’t get rid of things because of the guilt, you might try one of the conversations I’m sharing this week!

(Go here if you can’t see the video!)

The It’s Not You, It’s Me Approach (the script)

GUILTEE: Hey, I need to get rid of that coffee table you gave me.

GUILTEE: Oh, I just don’t have a place for it in my living room anymore. And it doesn’t match the new furniture anyway.

GUILTER: But I got that when I was in college!

GUILTEE: I know. And I loved getting to use it, but I don’t have space for it anymore.

GUILTER: I can’t believe you don’t want that coffee table. I didn’t eat out for three months so I could save up to buy that.

GUILTEE: Oh, it’s a beautiful coffee table, and it served me well for such a long time. But you know how I am. I tend to keep stuff for way longer than I should and I’ve realized that’s a big part of my problem. It’s one of the reasons I have such a hard time keeping my house under control. Thanks so much for giving it to me to use for all those years. That was so nice of you.

GUILTER: So you’ll keep it?

GUILTEE: (Interrupting) OK then. I’ll donate it. Thanks so much! I just wanted to check with you because I was so grateful you let me use it and didn’t want to donate it without asking you if you wanted it back! Oh, I am so sorry, I have to go.