I know. I’ve been yakking about laundry all week.

I just get excited when puzzle pieces unexpectedly fit because a routine is working.

Puzzle pieces like this towel that I used as a knee-saver when I was cleaning that horrendous spot on the playroom floor last weekend: 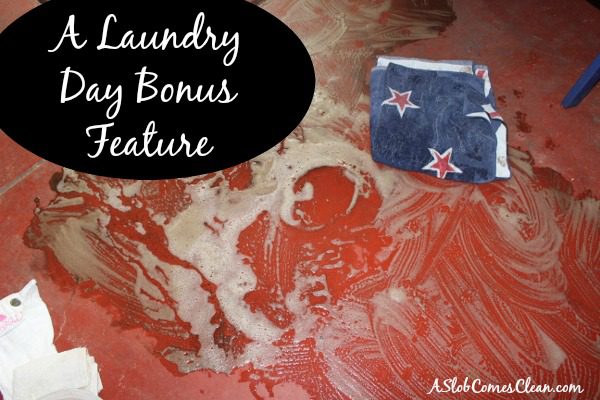 Pre-Laundry Day, I would have been overwhelmed by the thought of that towel and all the grossness it had touched. I’d have wanted to wash it, but would have been paralyzed by the fact that it was just ONE thing on the never-ending list of things that needed to be laundered.

I would have questioned the justification of washing IT when we were standing way too close to the edge of Undieless Cliff.

And most likely, the washing machine wouldn’t be available anyway since I’d need to re-wash whatever was in it.

But the washing machine was empty. And I felt no pressure to wash anything else first since it wasn’t Laundry Day.

I did throw in a few other dark towels, and that load put me AHEAD on laundry instead of behind.

Read Newer Post I’m speaking at an ONLINE Conference next week! (Perks for pre-registering!)
Read Older Post Setting Aside a Weekend for a Twenty Minute “Project”