Last week when I made the shocking statement that I was beginning to enjoy Laundry Day, I was asked by MJ to explain the day in more detail. With all of the things going on in the life of a busy woman, the thought of devoting an entire day to laundry is daunting.

I know this. Because remember, I’m no expert here. I’m just a woman who has struggled with laundry forever, trying every “method” of keeping it under control that I found. So far, this method is working for me. 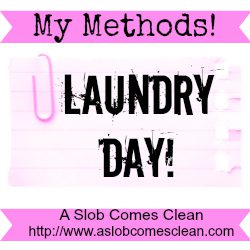 If you’ve read my blog before, you know that focus is one of my big problems. Since there are a million (often worthwhile) things that I’d rather do than clean house, housekeeping issues only come to my mind when they are a total necessity. And although a bathtub or closet can go a VERY long time before my slob-brain deems it a total necessity, laundry doesn’t work that way since my husband refuses to go commando.

So when the necessity arose, he or I would do what was absolutely needed. Undies, socks, kids’ school uniforms, etc. were given top priority and everything else was given “if I can” status.

And even when I felt inspired to do several loads of laundry, I was never caught up. I did try the one-load-a-day method, but even though I made it the focus of my non-negotiable tasks for weeks on end, I would still forget (either entirely or one step here-and-there) and get behind, never to catch up.

A while back, I decided to do a Laundry Day. Years ago, I did this, and I look back at it as the only time in my life when I had laundry under control.

On Sunday night, I go through the house and collect dirty clothes. Then my little not-a-real-hallway in front of the laundry room becomes my dumping/sorting ground. For the last several weeks, I’ve counted my loads, and there have been 6 to 7. The first week I did this, there were more loads, but that was much more than one week’s worth of laundry. I now feel like I actually know how much laundry we create in a week as a family of 5.

Yes, I’m literally posting a picture of our dirty laundry for all the world to see. For some reason, the piles don’t look as big from above (standing-on-a-chair-above), but they are full loads of laundry.

Sunday night, as soon as I have sorted, I start one load of something that takes longer to dry. Towels are good because the laundry room is right next to our bedroom and jeans have snaps and rocks-in-the-pockets which can be quite noisy. I put this load in the dryer before we go to bed, and load the washer to be started in the morning. 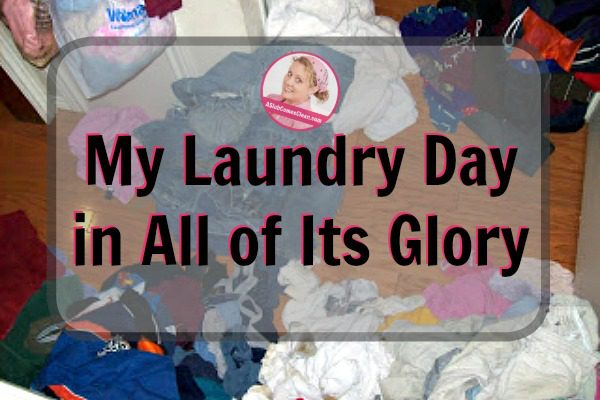 Here is how today went:

6 a.m. – Got up, started the washer and turned on the dryer for a bit longer.

6:30 a.m. – Took the towels out of the dryer and dumped them on the loveseat. Transferred washed load to dryer and started another load in the washer.

7:45 a.m. – Returned home and worked on my Bible Study while my daughter played with friends whose mom had just dropped them off at our house.

8:20 a.m. – Dryer buzzer went off and I switched over the load. Dumped dry clothes on my (made) bed, laying school pants/shirts flat to reduce wrinkles.

8:30 a.m. – Made multiple scheduling phone-calls. Began pulling years’ worth of “stuff” out from under my bed, pausing often to dress Polly Pocket.

9:30 a.m. – Dryer buzzer went off and changed over a load of laundry. Dumped dry clothes on my bed.

9:40 a.m. – Cut up fruit for snack-time and went back to playing the part of archaeologist as I cleaned underneath my bed.

11:30 a.m. – Dryer buzzer went off and changed over another load. Dumped clothes on bed.

1:05 p.m. – Dryer buzzer went off and changed over load, dumping dry clothes on bed. The load that I put in at this point is my next to last one. The jeans are in the dryer and since they’ll take longer to dry, I’ll actually wash two small loads while they’re drying, and then dry those together. One load contains a king size sheet and a pillow I found under my bed. The other is made up of three dark towels that I didn’t want to wash with anything else.

So, by the time I return from picking up the boys at 3:15, I should be ready to put my last load in the dryer. Then, at that point, I’ll work on folding and putting away. And since the folded clothes are on my bed, where I’ll want to SLEEP tonight, I’ll get them put away before bedtime.

The main things I like about this system is that I don’t have to prioritize. There were items in my laundry room that had been waiting ages to be washed. They would have been used if they were clean, but I didn’t HAVE to have them, so they always moved down on the list, below necessities. This is embarrassing, but usually when I finally got to an item like that, it was too small. Total waste of space and money . . . . and energy.

I also can see easily which clothes are actually needed. By Sunday, I know that anything that is still clean in the drawers is not truly necessary. That doesn’t mean I’ve pitched all but 7 days worth of clothing, but it has made it easier to purge.

I also found it very interesting to see the variety in drying times of my loads today. Several weeks ago when I mentioned that my towels and jeans often took extra time to dry, a couple of you suggested that I should check my dryer to be sure there wasn’t lint build-up in places other than the normal lint-screen. I thought it was a great idea . . . and have been meaning to . . . but . . . well . . . I haven’t.

My dryer has “Sensor Drying” which I didn’t realize could make such a huge difference in drying times. One load above took two hours, while my small socks and undies load took less than an hour. That’s a big difference. Now I’m motivated to check the dryer, and besides, if I pull it out and mess something up, I don’t need to do laundry for another week anyway, so hubby could work on it next weekend! Even the fact that I CAN pull the dryer out is exciting! Now that I have laundry under control, I can see the (ugly) floor of my laundry room!

Also, I do want to point out that if you have a septic system, this might not work for you. I was discussing laundry with a friend recently (not a conversation my 20 year old self ever imagined I would have) and she said that she used to do all of her laundry in one day. However, when they built a house in the country, she had to stop. 7 loads in one day overloaded their septic system to the point that it actually set the alarm off. Once her husband explained how serious that was, she gave up her system and started doing 4 loads on one day and 3 the next.

And for the weeks when I haven’t been home on Mondays, here’s an example of how I’ve still managed to make it Laundry Day.

*FYI, Laundry Day probably won’t work for you if you’re on a septic system, as it may overload your system. Sorry!