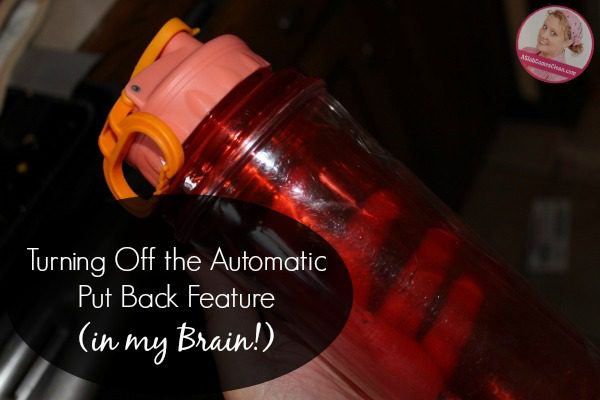 Oh, how I struggle with the Automatic Put Back.

Oh. You have no idea what I’m talking about? Well, it’s the thing that happens when I pull something out of a cabinet/drawer/closet and think “Oh, we can’t use this because it’s broken/ugly/I-just-don’t-like-it.”

Those thoughts go through my head.

My response? Put it right back where I got it.

Which is interesting (a nice way of saying SO DUMB) since I almost never automatically put something back after I actually DO use it.

But I’m working to adjust my settings. To turn off the Automatic Put Back feature in my brain.

Like when I pulled that water bottle out while searching for one to send with a kid to camp over the summer. I was pretty sure it leaked. I asked the kid if it leaked. The kid confirmed that it did leak. And that there was no way he was taking it to camp.

Y’know, because it LEAKED!

But as I leaned over to place it BACK in the cabinet, I stopped.

Maybe it has something to do with all the decluttering I’ve done over the past five years. Maybe my brain registered that a useless water bottle has no right to take up cabinet space in my house. Maybe it’s because I saw it as a topic for a future blog post.

Whatever it was, I’m so glad I was able to override that blankety-blank feature at least this once.

I threw it in the trash. Right then.

I’d be more proud if I’d thought to stick it in the recycling bin instead, but whatever. It’s gone.

Does your brain have an Automatic Put Back Feature? Is it the good kind or the bad kind?