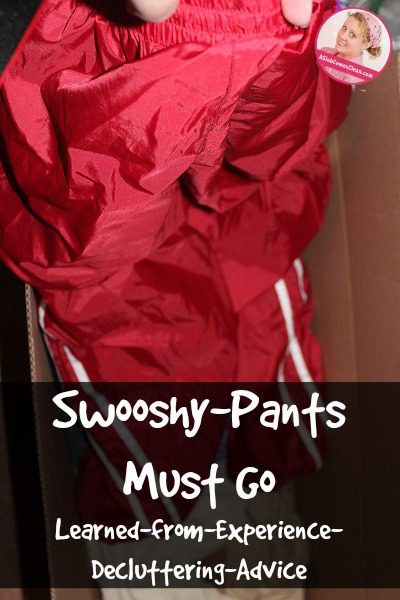 Those are swooshy pants.

In a Donate Box.

Swooshy pants should really be the easiest type of clothing to purge, but I somehow still struggled.

Oh. Not sure what swooshy pants are? They’re the ones that make a swooshy sound when you walk.

I think I’ve debated about those pants every time I’ve purged clothing for the past five years. Honestly, I haven’t worn them in those five years either.

It’s just that every time I started to pitch them, I would think about how one day, one coooooold day in the future, I might need them.

And they are lined!!! With really warm and thick something-or-other!! If I ever needed to spend time out in the freezing cold in a situation where I did not care one bit about how I looked, these would be the perfect pants!!!

But then, that happened.

I’ve mentioned my 5 a.m. Camp Gladiator workouts. Well, these workouts happen no matter the weather. Even when it’s like 20 degrees. Or colder.

Even when the wind is blowing like nobody’s business.

They also happen in the dark. Yes, there are a few lights. But honestly . . . this is as close to a who-cares-what-I-look-like situation as I’m ever going to get.

I’ll admit that I skipped the workout (the only time I’ve skipped) on the day when school was canceled due to an ice storm. But it was still scary-cold two days later when I did go. I had stressed all night about how cold I was going to be.

Around 2:30 a.m., I remembered those red workout pants. I think I even got up to be sure I still had them and then slept less fitfully after I knew I had something warm to wear.

I got up at 4:45 and put them on. I even walked to the kitchen to get my water and unlocked the front door. But as I walked out, the swoosh became too much for me to bear. The swoosh plus the elasticized ankles.

I had to turn around and put on less embarrassing pants.

I was cold, but I managed.

And now I know the answer to the age-old declutterer’s dilemma:

If I had to be outside in the freezing cold while it was pitch dark, wouldn’t I be glad for these pants, even though they’re swooshy?

The answer is no.