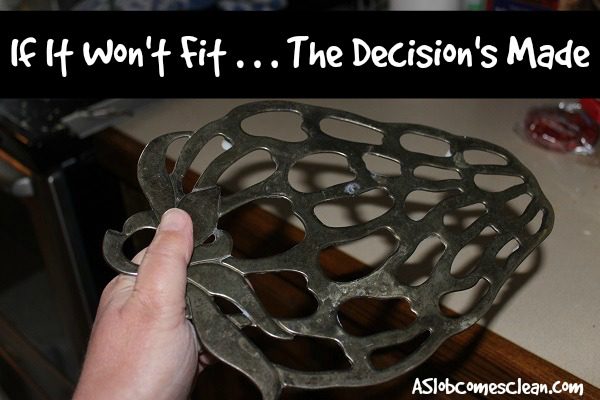 A while back, I decluttered a kitchen cabinet. Inside, I discovered some trivets or hotplates or whatever-you-call-them.

I was proud of myself for choosing to keep only two. The two that fit in the drawer next to my stove where I keep such things.

I was practicing my hard-learned Container Concept. Go me.

But evidently, in the moment when I decided they fit, the drawer didn’t have everything in it that it usually does. I’m guessing an oven mitt had been randomly left on the kitchen table.

So once my kitchen was totally clean, I couldn’t shut the drawer. After three or four attempts to get it closed, I realized that my container (the drawer) was overflowing. Something had to go.

I removed the strawberry trivet that I hadn’t used in years anyway. (And that also appears to have something on it that looks a little like bird poo. Even though it’s not.)